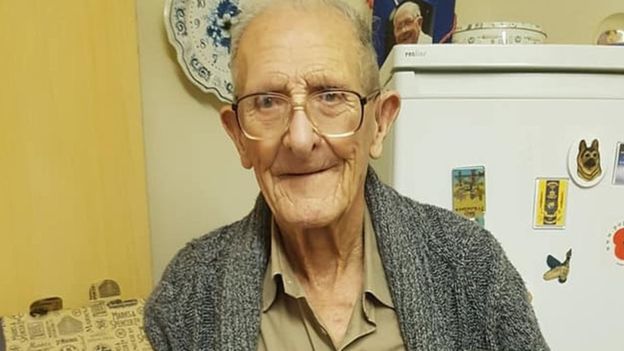 A 93-YEAR-OLD veteran from Pembroke Dock said he was made to ‘feel young again’ after he spent three hours opening Christmas cards.

The dozens of cards were sent to World War 2 veteran Ted Owens after his friend, Mark Llewhellin, made an appeal on Facebook.

Mr Llewhellin said that he didn’t want the veteran to feel lonely over Christmas.

Christmas cards were sent from as far as Australia.

Previously, Mr Llewhellin had taken Mr Owens around army barracks across the country.

He said: “He lives on his own and he does sit in and look at four walls a lot. It’s quite lonely really. It’s great to take him out to these places but, after that big thrill, he’s on his own.
“He’s got an incredible story, but the most incredible thing is he’s just so nice and humble and down to earth.

“This Christmas, I thought to myself ‘can anyone send him some cards or gifts?’ He’s been bombarded and he’s even had a phone call from another Commando in Australia.”

Mr Owens told the BBC: “I was on the D-Day landings and was very badly wounded on the first day. I was two-and-a-half months in hospital then I went back to my unit and went all through France and Belgium.

“Then I was on the Walcheren landings, a big island off the Dutch coast, and got wounded by a mine. I was also in the Battle of the Bulge.