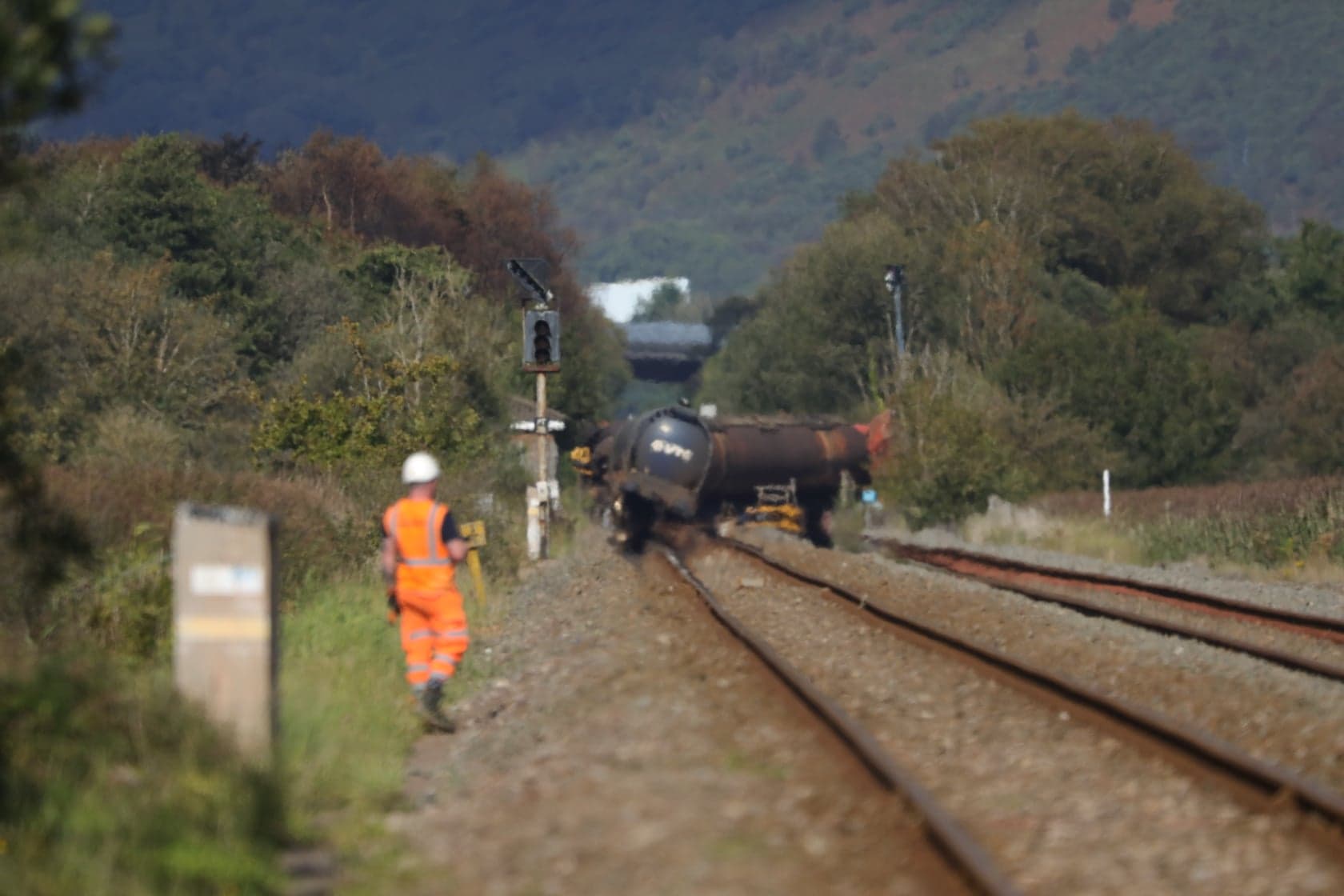 NATURAL RESOURCES WALES have been dealing with the diesel spilled as a result of the train derailment and fire in Carmarthenshire.

The work comes as British Transport Police said they did not suspect that criminality is a reason for the incident.

Ten wagons, each containing 75 tonnes of diesel, derailed and spilled oil into the Loughor Estuary near Llanelli in Carmarthenshire on Wednesday night (Aug 26).

The cargo train was travelling from an oil terminal in Milford Haven to Reading. Work is continuing to recover the diesel from the derailed wagons and the spilled diesel. Trenches have been dug to intercept the diesel and vacuuming and skimming operations are taking place.

Monitoring of local watercourses continues, with booms and absorbent pads being used and regularly replaced to contain as much of the diesel as possible. These techniques are proved to be working well and are removing a considerable quantity of diesel from the water courses.

Network Rail is arranging for a crane to be delivered to the site on Monday evening (31 August) to start removing the wagons from Tuesday (1 September).

Monitoring teams continue to carry out daily surveys around the Loughor Estuary, including around the local fisheries and bathing water sites.

Diesel is no longer confined to the upper reaches of the estuary (around the Loughor Bridge and upstream) and has been observed at many locations as far as Crofty.

The map shows the observed presence of diesel in the Loughor Estuary on 29 August 2020. The estuary is a very dynamic system influenced constantly by tide and wind, and will influence the movement of the diesel.

The Maritime and Coastguard Agency has also undertaken aerial surveys to aid the monitoring of the pollution.

The Environment Group set up in response to the incident will support and advise the response units on the identification and priorities for clean-up in the wider estuary. Detective Chief Inspector Paul Langley from British Transport Police said: “Thanks to the efforts of our officers and our colleagues from across the emergency services in making the scene safe at Llangennech, we have been able to conduct an initial investigation into this incident.

“Our initial findings are that the derailment is not believed to have been caused by criminal activity.

“We are therefore handing primacy of the scene to the Office of Rail and Road so that it can carry out its own specialist investigation.

“I would like to once again thank our officers for their efforts during this challenging incident, and I am grateful to all of our partners for their help and support in ensuring the safety of the local community.” This map from Natural Resources Wales shows the extent of the pollution from the accident (Source: NRW handout)

FROM OUR PHOTOGRAPHER, DARREN HARRIES

On Sunday (Aug 30), we visited parts of the Loughor estuary to find the strong smell of fuel in the air and oil slicks in the rock pools and rivers, from the train incident further up the estuary in Llangennech.
The area around the bridges and car park by Loughor Boating Club and Loughor Inshore Rescue, and surrounding area smells so bad,
‘We had to leave from feeling ill and getting a headache from the diesel fumes.
This may have been down to the wind direction, but it was unpleasant and something to be aware of if visiting the area.
We also noticed that Swansea Council has acted quickly and placed information signs around the area of ‘Notice Of Temporary Closure Of Production Area, signs had be dated on the 27th August.
But a fishermen did attempt to fish, the fuel filled river, but he found it impossible as his line and tackle, including his rod were covered from diesel.
We did not see any information signs on Llanelli side, so it may have been the case of the angler not being aware of the hazard in the estuary, despite the overwhelming smell.
From visiting Llangennech the day after the train wreck and seeing the area of the derailment, I could smell the diesel in the marsh and the river, as it entered the estuary.
Today’s visit to Llangennech, we seen Network Rail were back at work and an Oil Spill Response Company, turn up including a Specialist Security company.
Things are starting to happen.
We did see a post over Facebook, someone had taken a photo of a dead bird in the area, thought to be down to the spill.
Residents in Machynys and other parts of Llanelli can also smell the fumes.
The local cockle beds are closed, putting the cocklers and shellfish gathering on hold, along with fishermen.
The environmental impact on the estuary is not yet known, It’s doubtful that this diesel spill will have no good outcome for our wildlife and fish including the winter visiting birds that use the Loughor estuary and the Llanelli Wetlands.

Coronavirus update from the leader of Pembrokeshire County Council