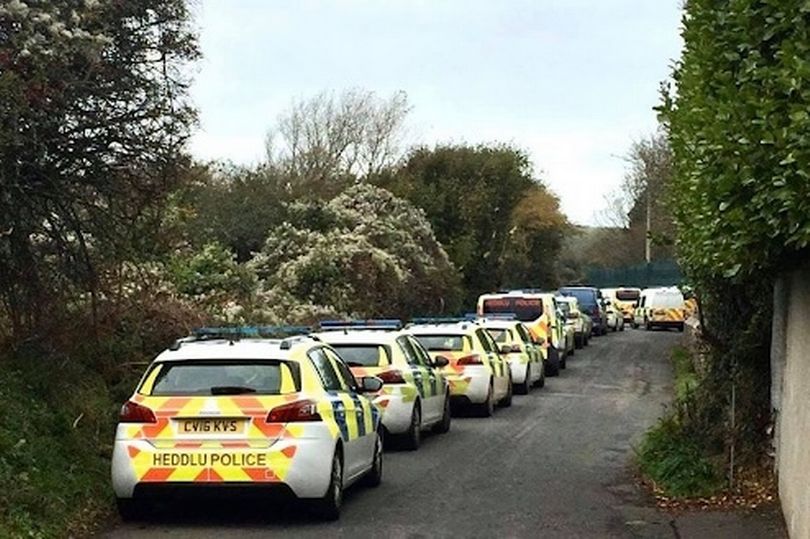 TWO asylum seekers have been banned from entering Pembrokeshire while investigations take place into a disturbance at a military training camp where asylum seekers are being housed.

Dyfed-Powys Police said it was called to the Penally Asylum Accommodation centre at 13:45 HRS on Tuesday (Oct 20)

Both have been bailed on condition they avoid the area, the force said.

Home Office spokesman told The Pembrokeshire Herald: “The government takes the wellbeing of asylum seekers and the communities in which they live extremely seriously.

“We are aware of an incident at the Penally site but it would be inappropriate to comment further while investigations are ongoing.”

There was an ongoing police presence at the camp again on Wednesday night (Oct 20) – with a police van with blue lights flashing seen driving into the facility.

PEMBROKESHIRE could be the location of an experimental nuclear fusion reactor, which could produce abundent clean energy, if the council backs plans for a site on land owned jointly between Valero oil refinery and Pembroke Power station.

Pembrokeshire County Council’s Cabinet will be asked next week (May 17) to support the project, which it is hoped could create limitless energy.

The officers of the council are recommending to Cabinet that members approve the nominated site being included on the list of UKAEA candidate sites.

Elsewhere in Wales, the Vale of Glamorgan Council is bidding for it to be built at the Aberthaw power station site.

Communities had until the end of March to nominate locations.

If approved the nuclear fusion station, the council’s officers say, could position Pembrokeshire at the international forefront of the clean energy revolution, bringing visibility to the community on a global stage. It was also recommended that the project will bring long-term and enduring environmental, employment, skills and economic benefits to the host community.

Nevertheless the government has a concept programme called STEP, which is an ambitious programme for the conceptual design of a fusion power station. It is a UKAEA administered programme, currently with £220 million funding to produce a phase 1 concept design by 2024.

Beyond 2024, it is claimed, phase 2 intends to move into the engineering design and build phases to deliver the prototype of a commercially viable fusion plant. The prototype will hopefully demonstrate the commercial viability of fusion. The learning from this will enable the future development of a UK fleet of commercial fusion plants, the government said. The target date for the first fully operational plant will be 2040.

In November 2020, the UK Government released an open call to communities across the UK to identify sites that could accommodate a STEP power station, with the site near Valero being chosen.

A report to councillors sitting on the Cabinet states that unlike with conventional nuclear power, there is a benefit of limited risk of nuclear materials proliferation. This is because nuclear fusion doesn’t employ fissile materials like uranium and plutonium. There are no enriched materials in a fusion reactor that could be exploited to make nuclear weapons.

The STEP programme said that it seeks to maximise the recycling and re-use of materials and only use disposal routes where there is no other option.

It said to this end research is being carried out on suitable materials to minimise decay times as much as possible. Any radioactivity of the components in the tokamak structure is classed as low level and relatively short lived.
Fusion is regarded by Government as being carbon free, safe, low land use, low, manageable waste, reliable energy baseload with unlimited fuel.

What is nuclear fusion?

Fusion is the process that takes place in the heart of stars and provides the power that drives the universe. When light nuclei fuse to form a heavier nucleus, they release bursts of energy. This is the opposite of nuclear fission – the reaction that is used in nuclear power stations today – in which energy is released when a nucleus splits apart to form smaller nuclei.

To produce energy from fusion here on Earth, a combination of hydrogen gases – deuterium and tritium – are heated to very high temperatures (over 100 million degrees Celsius). The gas becomes a plasma and the nuclei combine to form a helium nucleus and a neutron, with a tiny fraction of the mass converted into ‘fusion’ energy. A plasma with millions of these reactions every second can provide a huge amount of energy from very small amounts of fuel.

One way to control the intensely hot plasma is to use powerful magnets. The most advanced device for this is the ‘tokamak’, a Russian word for a ring-shaped magnetic chamber. CCFE’s goal is to develop fusion reactors using the tokamak concept.

With increasing concerns over climate change and finite supplies of fossil fuels, we need new, better ways to meet our growing demand for energy. The benefits of fusion power make it an extremely attractive option: 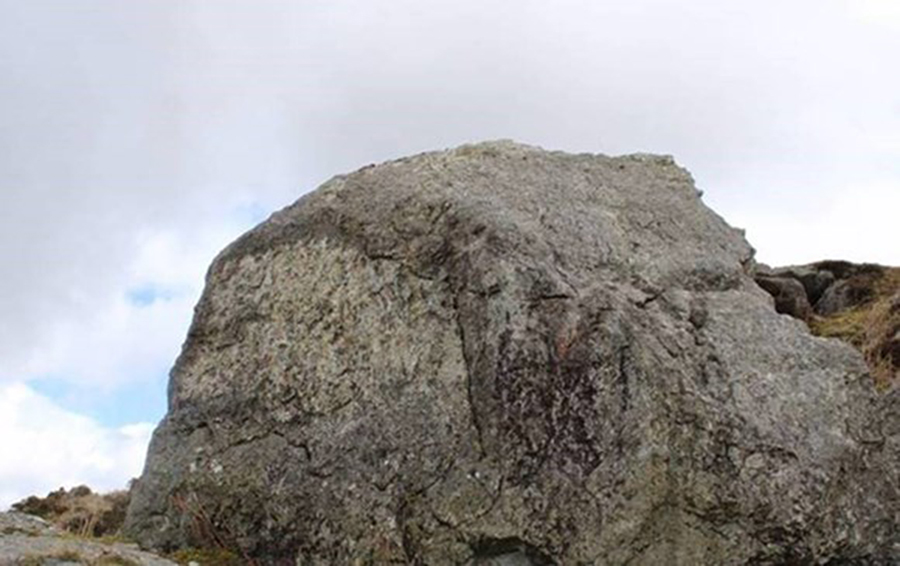 GRAFFITI painted on stones of historical and environmental importance at Pembrokeshire Coast National Park has caused environmental damage that could take decades to recover.

The white paint had blighted a Site of Special Scientific Interest at Carn Ingli, which is home to a diverse range of rocks, springs and scarce plants including lichens and rare damselfly coenagrion mercurial.

Staff from Pembrokeshire Coast National Park Authority carried out the careful removal work taking every precaution not to cause further damage. They followed an NRW-approved method statement to minimise the risk of further damaging the lichen flora.

They attempted to remove the spray paint with wire brushing, but with limited success. They had to resort to the use a solvent, carefully catching the paint and solvent residue and removing it from the site, to prevent any further damage. Special care was also taken not to trample any important flora growing on the ground around the stone.

“Not only is graffiti illegal and unsightly, but can also be very damaging to the environment. An area that is a Site of Special Scientific Interest is somewhere that should be nurtured and respected.

“Graffiti can damage the lichen flora that grows on stones. Once damaged, they can take decades to recolonise because they are slow-growing.

“I would urge anyone tempted to do such a thing again to think about the impact it will have.”

“As a national park authority, part of our remit is to safeguard the special qualities that make up the Pembrokeshire Coast National Park.

“It is disheartening when graffiti appears that could damage scientifically important sites and their ecology, and also the setting of landscapes that are of historical significance.

“The removal of this particular graffiti proved challenging and required careful thought.

“We hope that this case highlights how damaging graffiti can be and also leads to its discouragement.”

Report any sightings of graffiti to Dyfed-Powys Police online or by calling 101.

New charity partnership represents a step into the wild 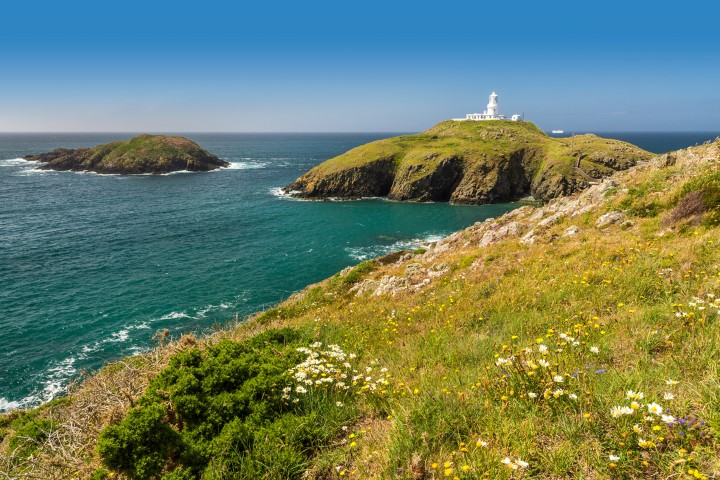 Corgi will donate 20% of all sale proceeds of their Pembrokeshire Coast National Park collection of men’s and women’s socks to the Trust.

PEMBROKESHIRE COAST NATIONAL PARK TRUST is delighted to announce a new charity partnership with Corgi Socks, a Carmarthenshire-based family-run business that’s been specialising in handmade luxury socks and knitwear since 1892.

As part of this partnership, Corgi will donate 20% of all sale proceeds of their Pembrokeshire Coast National Park inspired collection of men’s and women’s socks to the Trust. The funds will enable the Trust to support the vital work of improving access to the great outdoors, boosting diversity and conservation, promoting outdoor learning and supporting jobs and skills.

Chris Jones, Corgi CEO, said: “With this beautiful iconic landscape right here on our company’s doorstep, it is a daily reminder of the importance of sustainability and environmental issues. We are delighted to support a charity helping to keep the Pembrokeshire Coast National Park special now, and for future generations.”

Corgi’s Pembrokeshire Coast inspired socks can be found at www.corgisocks.com/collections/protecting-pembrokeshire-coast-national-park, and a discount of 10% is available to those who sign up to the Corgi socks mailing list.

The Pembrokeshire Coast National Park Trust is a charity registered by the UK Charity Commission. Its registered charity number is 1179281.