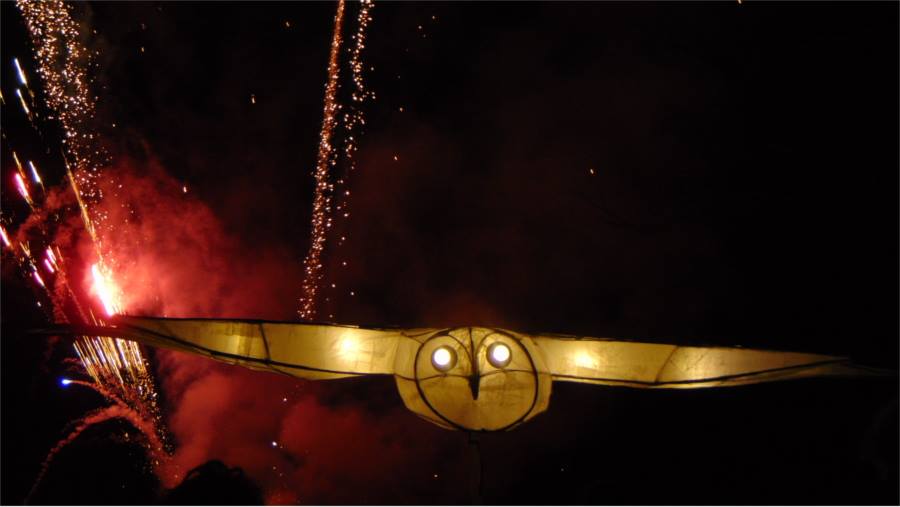 PEMBROKE DOCK was the place to be on Friday (Dec 1) when the community organised Lanterns in the Park parade kickstarted a weekend of events in the town.

Over 600 people packed into the Memorial Park to enjoy the spectacular parade led by Samba Doc ,who set the pace in front of 200 lantern paraders  snaking around the park’s paths.

The lanterns were made by Sand Palace Arts at community workshops funded by Pembroke Dock Festival Group.

After the parade the huge crowd was treated to a spectacular 20 minute fire show which included fireworks and pyrotechnics. Pembrokeshire Fire Spinners  show dazzled the crowd with their fire juggling and spinning skills, sending sparks which lit up the park and night sky.

Pyro artist Lee Berridge set his 18 foot structure of an owl in a tree alight which drew a huge gasp from the audience and fireworks donated by West Coast Fireworks lit up the structure which was a fantastic spectacle.

Father Christmas appeared and mingled in the crown greeting excited children and handing out sweets.

Samba doc then led the crowds to the park gates with another performance  and after getting the crowd warmed up the fun continued at the Pater Hall where the Festival Group provided free hot dogs and hot chocolate for over 300 people who were entertained by Fusion Community Choir with Father Christmas again mingling and collecting letters from the little ones.

Summing up the event Liz Cook, Community Activist, said: “Lanterns in the Park showed what the Dock can make possible when it pulls together.

“Three weeks ago the parade was not happening but over 30 people from the local community got the job done free of charge. and by working together with the Festival Group and Town Council a fabulous event took place.  I’ve never seen the Pater Hall  and park so packed out, the atmosphere and community spirit was amazing.

“As an informal group we will be working together in the New Year to organise the Midsummer and Winter festivals for the community. A huge thank you to everyone who helped in any way we all did our town proud.

“We couldn’t have done it with local businesses who also donated goods and time including B&M, Pembroke Dock Hire Centre, Rembrandt’s Jewellers and Parfitt’s Carpets.”

Hundreds of photos from the night can be viewed on the Lanterns in the Park Facebook page. If you would like to help out next year contact Liz Cook on 01646 621811.

FBM Holidays to be main sponsor for TenFoot Swim