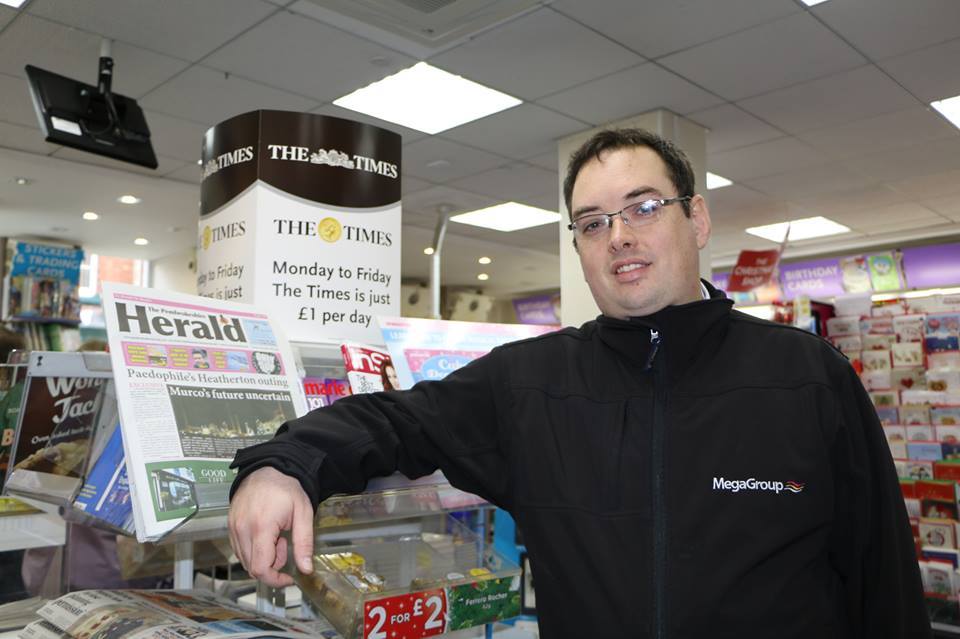 A SECOND judge stepped down from hearing the appeal of Herald editor Tom Sinclair at Swansea Crown Court today (Jan 12).

The 38 year old is appealing against a conviction for allowing a story to be published in the Ceredigion Herald in 2016 which could have led to the identification of the victim of a sexual offence – a failed attempt at voyeurism.

As the offending article from The Ceredigion Herald was read out in court, His Honour Peter Heywood QC realised that he had heard the failed appeal of the would-be voyeur and therefore had to recuse himself.

“A very unfortunate co-incidence… I would feel uncomfortable sitting on this case” he said.

Last year his colleague, His Honour Paul Thomas QC, also had to stop proceedings and call an adjournment because deputy editor Jon Coles – a likely witness in the case – is known to him personally.  They previously worked in the legal profession together when Judge Thomas was a barrister.

After a period of uncertainty, a third judge, His Honour Keith Thomas QC, was made available to hear the case.

The court heard how the victim of the sex crime had not been aware of the article in the newspaper – and was only made aware when contacted by a police officer. That officer had obtained copy of The Ceredigion Herald from The National Library of Wales after the sex offender’s solicitor complained to the police.

Judge Keith Thomas, sitting with two magistrates, rejected the first limb of the appeal when he ruled that the court report had contained so much detail that the victim could have been identified, even if only by family, friends and those who already knew something about her family.

Sinclair argued that he knew nothing about the report until he was made aware that police were investigating a complaint and wanted to interview him.

He said the Ceredigion Herald had been part of the Pembrokeshire, Llanelli and Carmarthen Herald group and as editor of all four titles all stories would be emailed to him before publication – but only as a way of searching out the important stories and deciding the layout of the first 20 pages. It would have been impossible for him to have read and edited 1000 articles per week himself, he claimed.

He said that a time sheet maintained by a security guard at the group’s main premises in Milford Haven showed he had left the building on June 23, 2016, at 11.26am – before the report had been emailed to him.

He then travelled to Heathrow airport for a flight to Oman to try to raise business investment.

Consequently, he had not had any editorial input in relation to the article.

But cross examined by Craig Jones for the CPS, responding to the appeal, he agreed he had not mentioned to the interviewing police officer anything about a trip to Oman on the day in question or about an unread email.

“Are you simply trying to wriggle out of your responsibility,” asked Mr Jones.

“Is the reality that you did see the article?

Sinclair said: “No, I didn’t see the article. I had my main man nurturing the court reporter and checking her articles. It was agreed that Jon Coles would check her articles but with me having the final say.”

Sinclair said that on previous occasions when he made a mistake he admitted it – such as when he printed an article naming the 17 year old captain who crashed his fishing boat.

He agreed he had told the police officer that in his opinion the article “sailed close to the wind, but by the skin of its teeth its ok.”

The court decided it needed to hear evidence from Mr Coles, who will connect to the court on January 22 by video link with Haverfordwest Magistrates’ Court. The hearing was adjourned until then.

Sinclair said in court that negative publicity surrounding the case led to an impact on advertising sales, which was one of the reasons why he decided to close the print edition of The Ceredigion Herald to concentrate on online news in that region.