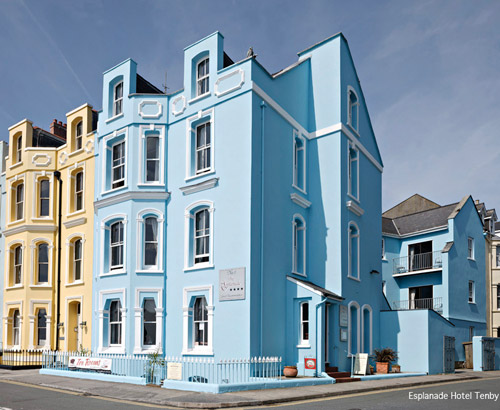 Hospitality sector newcomers Graham and Gabriella Preece achieved a lifetime’s ambition when they picked up the keys to the hotel, which occupies a prominent seafront position and had been on the market at a guide price of £850,000 for the freehold.

Graham Preece said he used to go on holiday to Tenby as a child – and fell in love with the charming and characterful resort – especially its distinctive Esplanade.

Graham, formerly a building surveyor, said: “I have been coming to Tenby since I was a child and then with my own family. It’s been a second home for me – and Gabriella fell in love with it as well.

“We saw that the Esplanade was on the market – and wondered if it would be possible to buy it. Now our dream has come true!”

Graham and Gabriella – who worked in international cycling management, have drawn up a two-three year programme to turn the Esplanade into a contemporary boutique hotel.

“We would like to open a coffee room in the lounge overlooking the ocean to make better use of this fantastic space and of the hotel’s facilities. We’re aiming to have the hotel running for 12 months of the year – for the locals as well as our guests,” he said.

Occupying an enviable seaside position in one of Wales’ most popular seaside resorts, the hotel forms part of a terrace of five properties originally built as town houses in the 1870s and is arranged over three floors plus attic and basement.

Peter Brunt, a director in the Hotels team at Colliers International, said: “The buyer used to go to Tenby for his holidays and was determined to return one day to open his own business. Luckily, he spotted our name and got in touch for some market advice.

“Graham and Gabriella have now sold their business in Chepstow to start a dream life in the heart of west Wales.

“Colliers sold the Esplanade to the vendors back in 2004.  It has 14 letting bedrooms, plus owners’ accommodation including three bedrooms, living room and kitchen dining room.

“It has been successfully traded to serve the town’s thriving Bed & Breakfast trade but is fully capable of being re-launched at other, equally profitable sectors.”

Police issue ‘take a message, pass it on’ advice