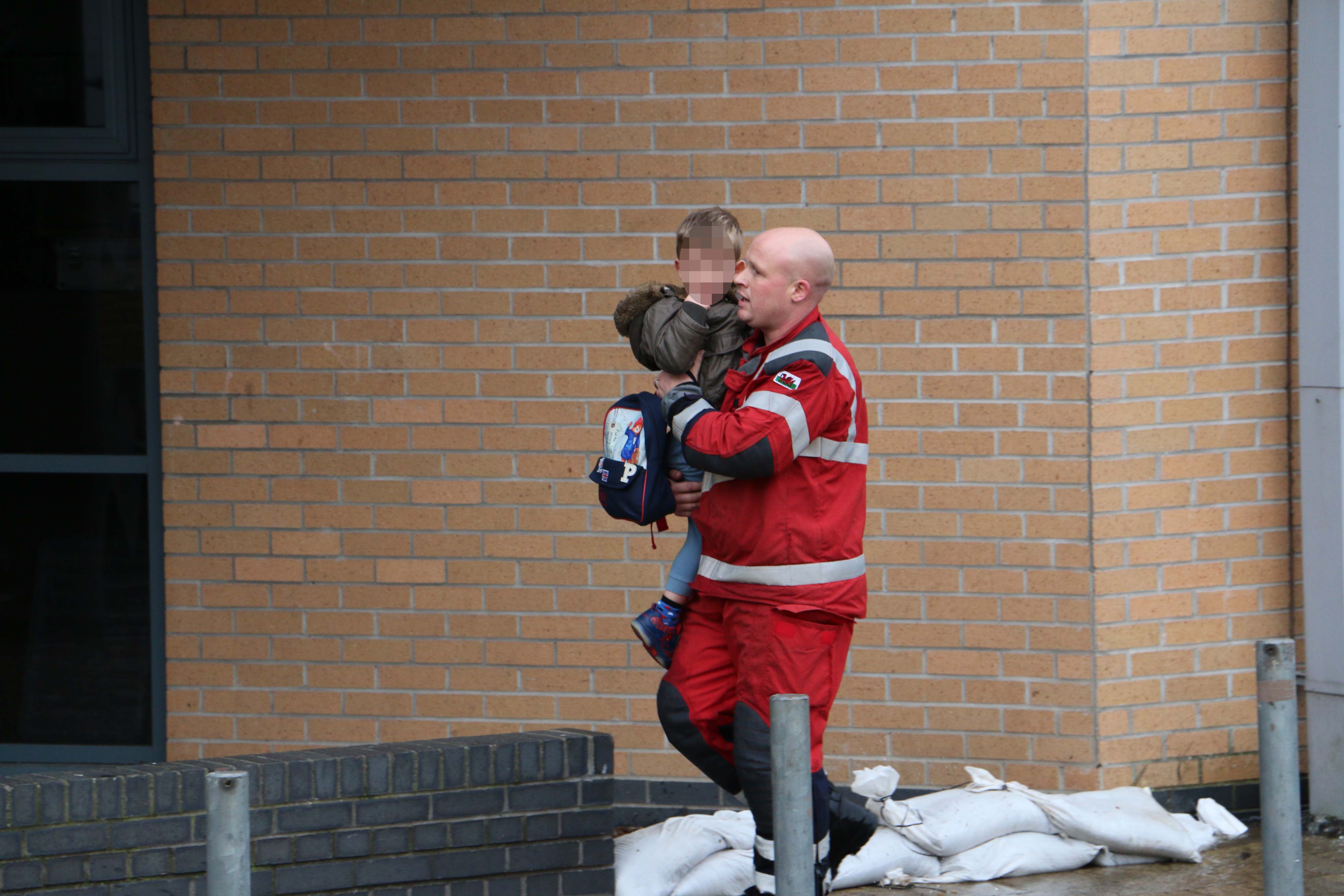 Rescued: A firefighter carrying a child from Happy Day's Nursery
MANPOWER and equipment from all over the Mid and West Wales Fire and Rescue Service area has been mobilised in a major operation to keep flooding under control at Haven’s Head Business Park in Milford Haven.
Units from as far afield as  Ammanford and Hay-on-Wye were assisting fire officers from Milford Haven, Pembroke Dock, Haverfordwest and Fishguard to prevent the main retail shops from flooding. Four large hoses have been laid using specialist lorries from the rear of the Iceland store, going along the back of Tesco and across into the Dock. Two large pumps are in place and are currently sucking up large amounts of water to relieve pressure on Lower Priory, where several homes and a public house were flooded last night (Nov 8). Pumping water: A lot of equipment are at the site

Homeowners spoke of water higher than their kitchen tops, and landlady of the Priory Inn, Glenda German – along with her dog Bertie – were rescued by an inflatable dinghy.
Flood water was perilously close from entering stores, with sandbags being used to keep the shops dry. Police closed off Happy Day’s Nursery at around 8.30am this morning as water levels continued to rise, but some children had already been dropped off.
Once news spread that the nursery was to close, parents waited patiently in Tesco car park as firefighters carried children through the flood water one by one. Parents: Waiting for their children

The Paul Satori charity shop in Milford Haven have said they will remain open despite their car park being closed off by pump hoses blocking the entrance. They have advised customers to use Tesco car park.
Staff from the Port of Milford Haven were seen surveying the damage and taking photos of the flood water. A member of staff at Tesco spoke to The Herald. She said: “It’s never been this bad. I guess another inch or so and water would have been into some of the shops. I understand the water levels may have been higher during the night – that’s why the extra hoses have been added.”
Firefighters, some of whom have been working through the night, are being offered tea and bacon rolls by staff at Tesco.
Related Topics:featured
Up Next