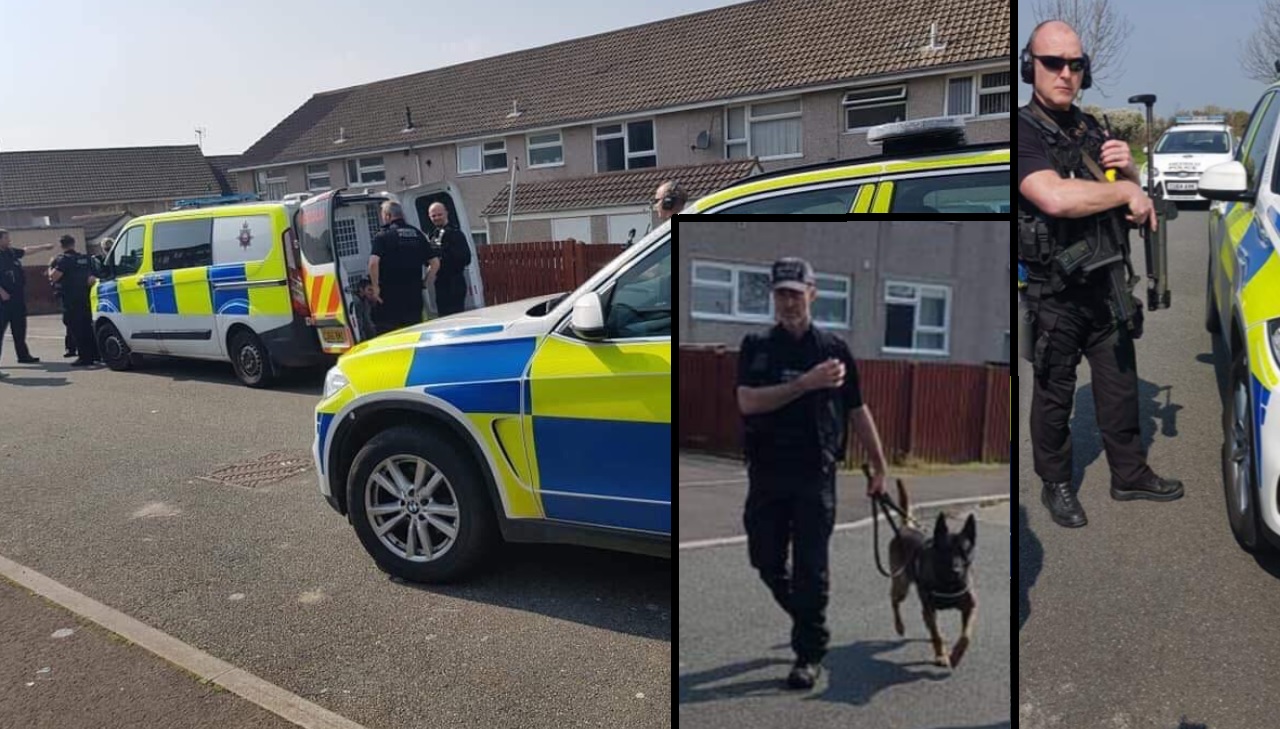 TWO people have been arrested in Howarth Close, Milford Haven this afternoon, including a pregnant teenager, following an allegation of assault made by a resident of the estate.

The incident happened at around 3pm on Saturday (Apr 6).

Police were on scene for around an hour.

Following police making their enquiries, the incident escalated, with them needing to call for back up.

Within minutes eight police vehicles were on the estate, including armed officers and a dog handler. The property around the incident was cordoned of by police with yellow tape.

A male was arrested first, followed by a 17-year-old girl, who is in the early stages of pregnancy.

She was detained by police, but was injured during the arrest according to several witnesses who spoke to The Herald.

One resident said: “We told the police that she was pregnant, and that she suffers with her mental health, but she was still kicked twice.”

A dramatic video of the moment of the event, taken by youngster who lives on Howarth Close shows the woman screaming “get your hands off me” and seemingly trying to resist arrest – the video has been shared on Facebook.

An ambulance was called to the scene. Another three residents said that the woman was bleeding and was taken to hospital.

A spokesperson for the police said: “We were called to Howarth Close, Milford Haven, at around 1.15pm on Saturday to a report of disorder.

“Firearms officers attended the scene due to initial reports that two people were in possession of knives. Following a detailed search, no weapons were located.

“A 24-year-old woman, of Howarth Close, was arrested and charged with two counts of assaulting an emergency worker and one count of using threatening or abusive words or behaviour likely to cause harassment, alarm or distress. She has been bailed to appear at Haverfordwest Magistrates’ Court.

“A 17-year-old was arrested and charged with using threatening or abusive words or behaviour likely to cause harassment, alarm or distress. He has been bailed to appear at youth court, and cannot be named for legal reasons.”

A Brexit event for Pembrokeshire businesses will be held on Friday.