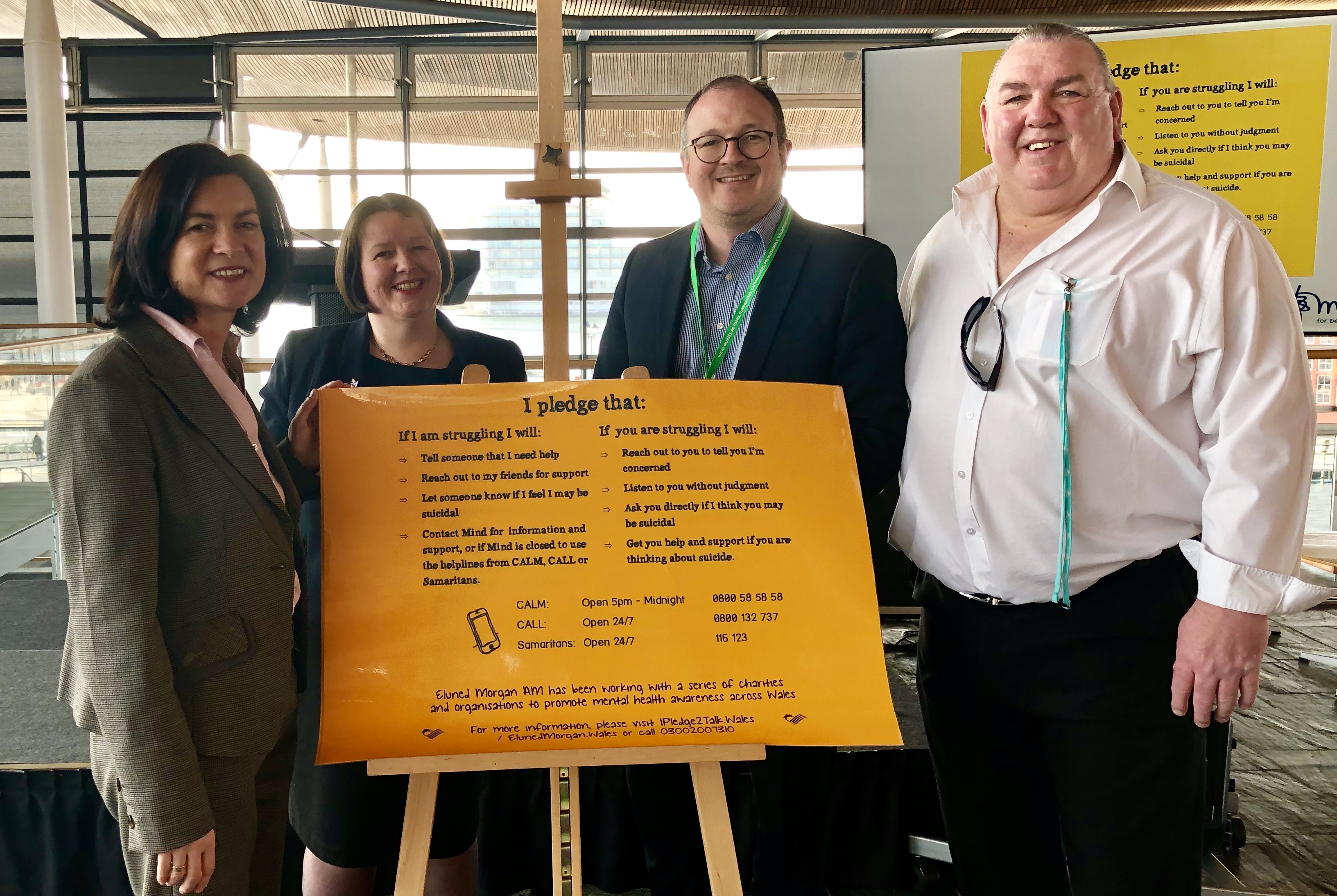 It’s a shocking statistic which has prompted Eluned Morgan to champion a new approach to encouraging men, especially in rural Wales to seek support.

Working with mental health charities across Mid and West Wales including The DPJ Foundation in Pembrokeshire, Eluned is focussing on building community resilience to end the stigma of poor mental health.

Data shows that men are less likely than women to seek help or to express depressive or suicidal thoughts. The causes of suicide are always desperately complex. According to Eluned Morgan, this undeniable trend in male suicide must be confronted, beginning with a move to challenge views surrounding mental health, so that it becomes a topic we can all talk about.

The #IPledge2Talk social media campaign is designed to do just that, by encouraging people to reach out and to open up about their feelings.

Championed by Assembly Member, Eluned Morgan and legendary Welsh footballer, Neville Southall, the movement endeavours to foster an openness in seeking support and to give people more confidence to intervene if they are concerned about someone being at risk.
At the heart of this drive is a pledge card, a resource developed by Mind, whose initiative came about in response to growing concerns over suicide rates.

Speaking on this important issue, Eluned Morgan AM said: “Every suicide is a tragedy. It is important to remember that there are many suicide attempts for each death. As we heard during the launch, the impact on families, friends and communities is devastating and far-reaching. But we can and must do more to prevent those deaths. The launch of the #IPledge2Talk movement is about empowering individuals to seek support and to educate the wider community that just some simple words of encouragement can go a long way in helping someone to manage their mental health crisis. Help is available, we can all make sure it is accessible to those who need it.”

Ex-Everton and Wales Football Keeper, Neville Southall said: “These pledges are fantastic. They should be on every tractor, taxi, bus and train to help make talking about mental health issues the norm. There are support services all over Wales, shining a light for those who need it. But having the confidence to seek help isn’t always easy. The #IPledge2Talk campaign is about how we can all play out part to help those who need it, to get the support they need and deserve.”

Carys Jones, who attended the event on behalf of The DPJ Foundation said: “Thank you to Eluned Morgan for highlighting the work that is being undertaken in Wales with regards to raising awareness of suicide and its causes. We at the DPJ Foundation welcome any initiative that encourages men to talk about mental health issues and it helps to have fantastic advocates like Neville Southall on-board to spread the word.”

The #IPledge2Talk campaign launched at an event in the Senedd last Monday, 1st April 2019. You can get involved by visiting the website ipledge2talk.wales and by sharing your own pledge on social media using the hash tag.

It’s up to all of us to start talking – and to keep talking.