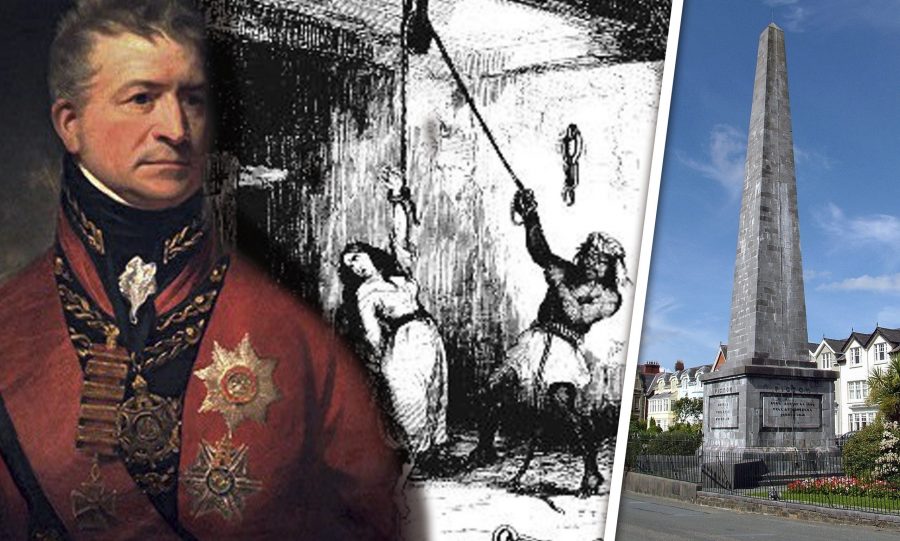 HAVERFORDWEST-born Sir Thomas Picton is now the centre of a debate over re-assessing monuments to slavery. In the wake of the international Black Lives Matter protests, and following the toppling of the statue of slave trader Edward Colston in Bristol, now the appropriateness of other historical monuments is being called into question.

The school named after him has already closed for unrelated reasons – but a blue plaque still remains on the Hill Street house where he was born.

The Pembrokeshire Herald has now launched an online questionnaire for the people of Pembrokeshire to vote on their view on the matter. The results will be forwarded to the local authority.

Cardiff’s Lord Mayor, Cllr Dan De’Ath has written a letter calling for a statue of the “sadistic” Picton to be removed from the Marble Hall in Cardiff City Hall.

A petition for a 25m high obelisk, known as the Picton Monument, in Carmarthen to be renamed has also received 1,000 signatures.

It comes as a statue to slave trader Edward Colston was pulled down during racial equality protests in Bristol over the weekend.

19-year-old Gweni Marni started a petition to “end the commemoration” of Picton via the monument in Carmarthen.

Gweni is from the town and wants the obelisk to be renamed and used to remember “someone good.”

She said: “A lot of people have no idea that Sir Thomas Picton did these things. What he did wasn’t even ‘of the times’, he was a controversial figure in his time and he went to trial for what he did. I just think there’s no place for it at all. It’s just a symbol of our ignorance.”
“We need to recognise our history and not celebrate figures like this.”

Sir Thomas Picton is remembered for his role in the Peninsular War and for being the highest ranking officer killed at the Battle of Waterloo in 1815.

But he also earned the moniker of “Tyrant of Trinidad” after serving as a governor there. He was known for his brutal regime on the island.

In 1806 he was convicted of ordering the illegal torture of a 14-year-old girl, Louisa Calderon.

He admitted to the charge but the conviction was later overturned.

Picton is also accused of having amassed a substantial fortune after profiting from the then legal slave trade.

In his letter to Cardiff Council, Cllr De’Ath wrote he felt it was “an appropriate time to reassess how fitting it is for Cardiff to honour a man such as Picton with a statue on public display.”

He wrote: “I feel is it no longer acceptable for Picton’s statue to be amongst the “Heroes of Wales” in City Hall and I am calling on you to arrange for its removal from the Marble Hall at a time when resources and logistics allow and when it is safe to do so.”
Responding to questions from journalists this week, the First Minister said “where we have statues to people in Wales whose histories belong in that past, rather than being on display as a form of continued celebration, then action should be taken. ”

Mark Drakeford also said he “wouldn’t want to see the way in which the statue was treated in Bristol repeated here.”

He added: “While I share the revulsion shared by people at events in the United States and agree we have to learn those lessons here in Wales I still want to ask people in Wales to express their protests in ways that does not add to the public health risk.”

Carmarthenshire County Council have confirmed they maintain the monument but are making enquiries into who owns it.

Cllr Emlyn Dole, Leader of Carmarthenshire County Council said: “It’s important that we have a conversation around this issue. That conversation has already started with the illumination of County Hall over the weekend in solidarity with all those who fight oppression.

We are keen to have a more detailed conversation and are making plans to bring this to the Council chamber as soon as possible where we, as members, can bring our feelings to the debate in a public arena so that we can come to a collective decision and take any appropriate action thereafter.”

Five mile travel restriction could be in place all summer

Councillor thinks race equality gesture is a waste of electricity