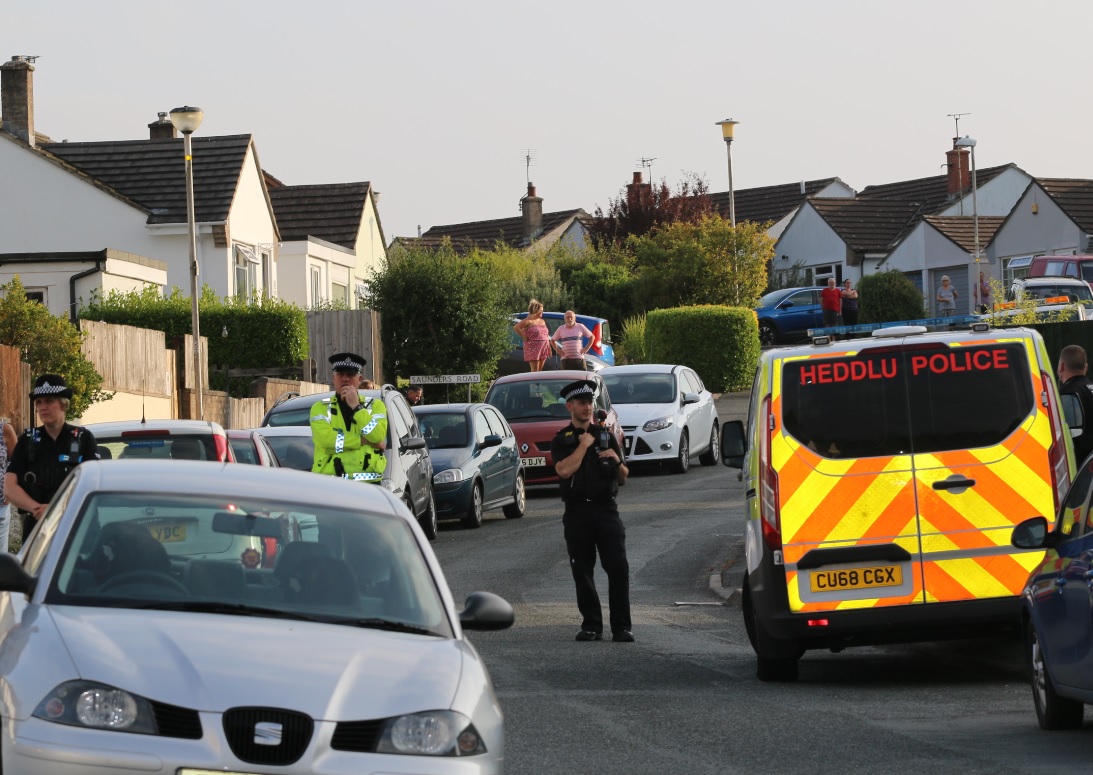 He was released on Friday (Aug 7) to his parents’ address in Bartletts Well Road after serving 13 and a half months of his 27-month sentence.

A small group of around 10 protesters, led by The Welsh Warriors, arrived in the street outside Harris’ home shouting “We’re here to get you out Jonathan”.

The shouting led neighbours from almost every house on the street to come out to their front lawns to see what the fuss was about.

Some of the residents were supportive of the protest but some others were critical of the protesters telling them to mind their own business and go home.

As this was happening a group of around fifteen additional people turned up and is was feared by residents that more would arrive.

A female protester said: “We are here to make sure this paedophile is removed from the street. There is a school 100 yards away and children playing here, and we are not going until that man has been removed.”

Another told a resident of the street who was telling the protesters to disburse: “We have done these before and we were waiting five days for the police to remove a paedophile and we can do the same again. We have our sleeping gear.”

The whole affair was streamed live on the Welsh Warriors Facebook page. Many comments were made online at what seemed to be a few vocal residents in the street supporting Mr Harris following his release from jail. Protesters in Sageston on Sunday (Aug 9)

“They are my neighbours and friends, and they should be allowed to get on with their lives quietly” a woman from the house opposite said.

“Why don’t you just run off back to where you came from – you don’t even know the full facts, do you, we don’t want a protest here.”

Within minutes the police arrived in three vehicles and Harris was quickly whisked into a police van and driven away.

Police asked some of the protesters to contact them in the first instance with concerns about sex offenders in the neighbourhood rather than turning up to protest unannounced.

The protest was then over, and police waited for protesters to disperse and said it was their duty ‘to ensure everyone’s safety’.

No arrests were made during the hour-long demonstration.

At the first hearing at Haverfordwest Magistrates’ Court in March last year, Harris entered no pleas to three charges of causing a child aged 13 to 15 to look at an image of sexual activity, for the purpose of obtaining sexual gratification; and also a further charge of attempting to possess an indecent photo of a child. However, at Swansea Crown Court he pleaded guilty to the offences. At a hearing on April 18, 2019, he admitted inciting the under 16-year-olds to engage in sexual activity and to causing three of them to view indecent images. All the offending took place during 2017.
His barrister, Jim Davis, said Harris appreciated that the crimes passed the custody threshold and that a prison sentence could be the outcome.
At that hearing Judge Walters said that it was possible that the defendant could avoid jail. However, following reports from a psychologist and the probation service he was given a custodial sentence. The moment Jonathan Harris (Wearing a hoodie, on the right) was removed from his house by police (Still from video)

Are you missing out on a council tax reduction?