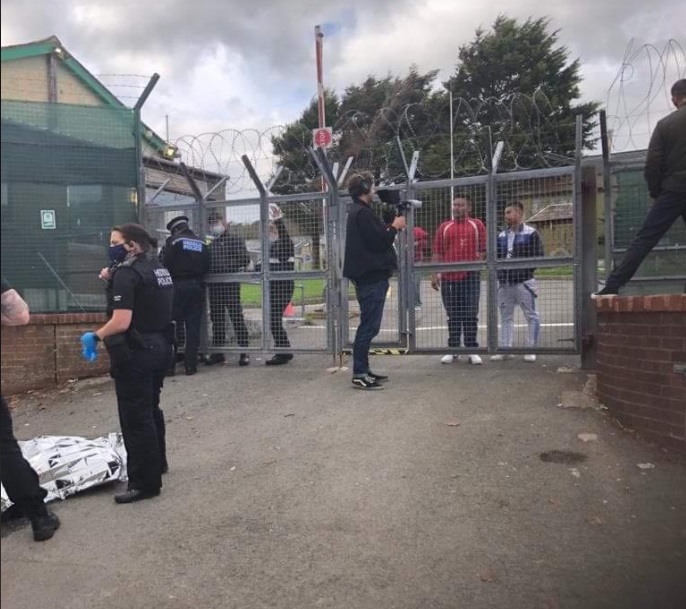 THE MAN who was injured at Penally Army Camp on Thursday (Oct 8) has spoken out on Facebook about his ordeal.

Andy Edwards said he posted to let all those who are concerned about his health know how he was doing, and to say he and his wife are outraged that the security guard at the centre of the allegations is still working at the camp.

Police and ambulance staff attended to him after he was knocked to the floor.

He said on his Facebook post: “I am doing okay apart from feeling battered, bruised and very upset.

“I have some loss of sensation which the experts hope will recover over the coming days. I guess for legal reasons I should not say too much about the alleged assault until I have been contacted by the police.

“As for the person responsible, my wife and I are outraged that the Home Office have not suspended him from front line duties pending an investigation.

“In addition to the police I have received no contact from the Home Office or their agents to check on my welfare.

“I have been allowed to leave hospital for now subject to keeping them informed on any changes or concerns. I would like to thank the police officers who attended to me on the ground, the ambulance personnel and the staff who looked after me at the hospital.

“Finally, my wife and I have received tremendous offers of concern and support from the incredibly kind people resisting this injustice that has been imposed on Penally – This is overwhelming and you are all putting up a fantastic fight whilst maintaining your dignity!

“I hope to be out and about and soon and I will try and meet up and thank everyone personally for their kindness.”

“A 55-year-old member of the public alleges he sustained injuries after being assaulted while taking photographs of the site.

“The incident did not involve any of the service users resident at the centre.

“Local officers attended the site at 2.45pm yesterday, along with paramedics.

“The injured man was taken to hospital and has subsequently been released.

“Police are still investigating the circumstances around the incident, but no arrests have been made.”

The Home Office have been contacted for a comment.