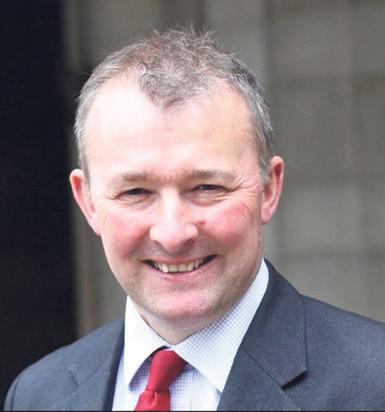 A PEMBROKESHIRE MP who backed the UK government not to extend the free school meal scheme to cover children throughout England for school closures up until Easter 2021, has experienced huge backlash on social media.

A motion on providing 1.4 million disadvantaged children in England, with a £15 a week voucher during school holidays until Easter 2021, was voted down in the House of Commons last Wednesday (Oct 21).

Simon Hart MP for Carmarthen West and South Pembrokeshire, stood with his Government and voted against the bill by 322 to 261, a majority of 61.

Simon Hart was named, along with over 300 of his Conservative colleagues, on The Daily Mirror’s front page, after voting to allow some of the UK’s poorest and vulnerable children to return to school ‘too hungry to learn’.

Stephen Crabb, the MP for Preseli Pembrokeshire, abstained from the vote.

With many organisations calling the decision ‘cruel’ and ‘callous’, one Pembrokeshire pub has taken their stance on the situation further.

Taking to their Facebook page, The Globe in Fishguard has issued a lifetime ban for both Pembrokeshire MP’s, they said: “Following the decision by the Mill and Il Manilo pub in West Yorkshire to ban their local MP Rishi Sunak and other MPs in nearby constituencies over their voting against extending free school meals over the holidays, I would like it known that abstainer Stephen

Crabb and Simon Hart, who voted in support of allowing children to starve, are similarly barred for life from The Globe!

“Thank God that the WG has promised to provide food vouchers for children in need in Wales.

“Anyone who actively or passively enables children to go hungry cannot possibly possess any humanity in our opinion. Here in the Globe we only allow humans and dogs to enter the building; as

Mr Crabb and Mr Hart appear to be neither of these then we feel we have no option but to impose a lifetime ban.”

In a statement on his Facebook page rounding up the week of politics, Mr Hart defended toeing the Government line: “The “opposition motion” last Wednesday seeking an extension to the free school meal programme into the holidays was non-binding and even if passed would not have changed anything.

“The frustrating thing about these motions is that they are nothing more than political theatre. For what it’s worth, it was this Government that extended FSM’s in Easter and Summer holidays in the first place but which has now decided that families in greater need are best served through increasing benefits over a whole year, not just via food vouchers in the holidays.

“I do understand how this looks in the media though (which is exasperating for all of us) but it’s not as straightforward as just removing something without trying to offset the consequences.”

Mr Hart omitted to mention that FSM provision over the summer holidays only happened after the Westminster Government was shamed into action after a massive public outcry over its initial refusal to provide them.

His position was not helped by a series of inflammatory tweets from fellow Conservative MPs, such as Ben Bradley, who claimed over the summer meal vouchers were traded for drugs and prostitutes in his Mansfield constituency.

However, Mr Hart will be pleased to have had support echoing his point on free school meals from Carol Peett, the wife of his constituency chairman, Rayner Peett.
Mrs Peett posted the following on Facebook: “All this Marcus Rashford rubbish – momentum scam to try & destabilise the government using a thick footballer’s name as a frontman – the Government had already given money to councils to make sure these children are fed so totally pointless.”

The Welsh Government has extended free school meals for those eligible through the school holidays up to and including Easter 2021.

Commenting on Simon Hart’s vote, Alistair Cameron, Welsh Liberal Democrat Senedd Candidate for Carmarthen West and South Pembrokeshire said: “Simon Hart’s recent voting choices demonstrate callous neglect for struggling families. Whilst Kirsty Williams in the Senedd has been ensuring that poverty should not mean hunger for our most disadvantaged children, our MP has chosen to deny children across the border the funding that could stop them from going hungry. I am deeply disappointed in our MP.”

The Herald asked the Conservatives’ Education Shadow Minister in the Senedd, Suzy Davies MS, to say whether or not she supported the Welsh Government’s decision to extend free school meal provision.

A spokesperson replied: “The UK Government has invested more than £4 billion in Wales to fight Covid-19 which the Welsh Government are able to use to fund support for people including free school meals during holidays.”

“While the primary duty to feed children lies with the parents, we recognise lockdowns and other restrictions have placed real pressure on family budgets, especially where people haven’t been able to access support or have to use convenience shops which can be more expensive.

“Ensuring children stay physically and mentally healthy during this time is a priority so that they can get the best out of their education and not let Covid-19 define their future. But any scheme must support those who truly need it; those that can afford to contribute should.”

The £4bn claimed to be ‘invested’ in Wales is funding the UK Government was obliged to provide to our country using the Barnett funding formula. It came as a result of the UK spending further money in other parts of the UK to tackle COVID-19.