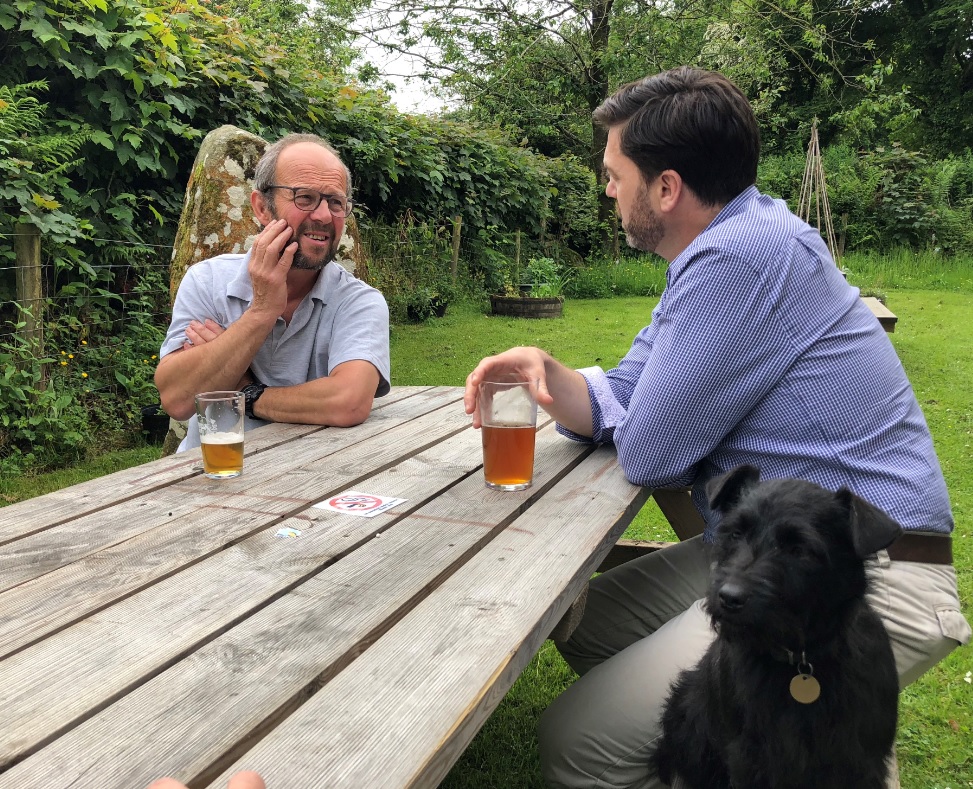 PRESELI MP Stephen Crabb has joined calls for the Chancellor to reconsider changes to a scheme which has transformed the small brewing sector in the UK.

In a joint letter to Rishi Sunak, Stephen Crabb argues that changing Small Breweries’ Relief (SBR) will put a great British success story under threat at a time when many businesses are struggling to survive.

SBR has provided the basis for growth and innovation in the brewing sector and means there is a small brewery in nearly every constituency, employing 6,000 full time jobs and contributing £270 million to GDP each year.

Under the current system, small breweries pay a proportionate amount of tax on the small amount of beer they produce compared to the global companies that dominate the industry. Up to 5,000 hectolitres – which is about 900,000 pints – they pay 50% of beer duty to the Treasury.

Plans announced by the Treasury in July will see the 50% threshold reduced from 5,000 hl to 2,100hl – meaning that over 150 small breweries will have to pay more tax. At the same time, those larger in size will pay the same amount of tax or less. The Treasury also proposes converting the relief to a ‘cash basis’ which could see support for all brewers receiving SBR being eroded away.

Stephen Crabb said: “Our small independent brewers are a real success story, and the support provided through Small Breweries’ Relief is key to their future. These businesses have been severely impacted by the Covid pandemic and now is not the time to be making changes to this scheme.”

Chief Executive of the Society of Independent Brewers, James Calder said: “SBR has been a great success, revolutionising brewing in the UK and allowing more brewers to start up and compete against the global companies that dominate beer in our country. The Chancellor is forcing changes on small breweries, which we have not asked for and do not support. The Treasury needs to urgently reverse course, not reduce the 50% threshold below 5,000hl and give the industry something to cheer about.”

The full text of the letter signed by 103 MPs is below:

The craft beer industry is a great British success story, the envy of the brewing world, and leading the way in innovation and the development of new and exciting beers.

There is a small brewery in nearly every constituency, making around 7% of the beer produced in the UK, employing 6,000 FTE jobs, and directly contributing £270 million to GDP each year. This is something we can all raise our glasses to.

This has, in no small part, been propelled by the Small Breweries’ Relief (SBR) scheme introduced in 2002, which has provided the basis for growth and innovation. You will be aware that SBR means that small breweries pay a proportionate amount of duty to the Treasury. Those producing up to 5,000 hectolitres (hl) a year (approximately 900,000 pints) pay 50% of the full duty rate. Above 5,000hl, brewers pay beer duty on a sliding scale, up to the same 100% rate paid by the largest, multinational corporates.

However, changes proposed by the Government to SBR stands to put this success story at risk.

As a cross-party group of MPs, we are concerned by the recently announced conclusion of the Treasury review of SBR, which proposes to reduce the threshold for the 50% rate in beer duty from 5,000hl to 2,100hl. This will have a devastating impact on at least 150 small breweries brewers across the country, including the Pennine Brewery in your constituency. The proposed move to a cash basis could also lead to the support for all brewers receiving SBR being eroded away as there will be no guarantee the rate will change at all or keep up with inflation.

The review of SBR represents a long-awaited opportunity to fully assess and address the inconsistencies within the duty system but it must be done so in the right way. The current ‘cliff edge’ of relief at 5,000hl does act as a disincentive to growth, and needs to be addressed, but this should not be at the expense of the smaller breweries.

The decision to reduce the starting level to 2,100hl redistributes relief from smaller to larger brewers and is against the original principles of SBR – it will no longer be a progressive beer duty. Fifteen Members from across the House took part in in an adjournment debate on Monday 9th November 2020, demonstrating the interest in this subject.

We therefore urge you to reconsider this approach and look at alternatives that will allow the cliff edge to be smoothed out to incentivise growth without withdrawing any relief for any brewer below 5,000hl.

Now is not the time to penalise small breweries

We are aware that the proposed changes are not expected to come into effect until 2022 but, as we all know, it will take some time for the country and the brewing sector to recover from the impacts of Covid-19. The anxiety caused by the delay in the technical consultation and what the new system might look like only also adds to the uncertainty faced by the sector over the past few months.

The industry emerged from the initial lockdown where brewers lost 80% of their sales due to the closure of pubs, and small breweries have poured away 5 million pints of spoiled beer. Even as pubs opened over the summer, sales were down 50% on a normal July, and breweries were not eligible for the Business Rates holiday or £25,000 grant. This is already taking its toll: two small, independent breweries are going out of business every week.

Research by the Society of Independent Brewers (SIBA) shows that 58% of small breweries are delaying investment, 51% are delaying employing new staff, whilst 49% are delaying increasing capacity because of the uncertainty caused by these proposed changes.

We believe that now is not the time to burden this sector further. It will reduce consumer choice by reversing the revolution in new and innovative breweries, pulling up the ladder for breweries who want to grow.

We also hope that you will continue to engage with sector representatives like SIBA to ensure that the reformed SBR promotes and sustains the craft beer revolution, rather than hinder it.