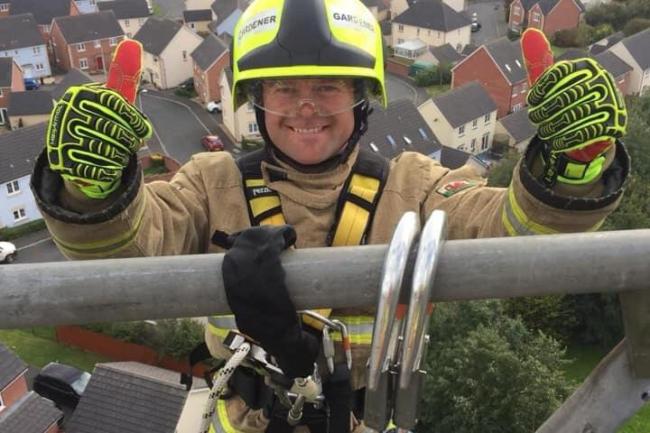 A HARD hitting report into the circumstances surrounding the death of firefighter Josh Gardener in 2019 has blamed systemic, organisational and procedural failings by the local fire service.

The Marine Accident Investigation Branch (MAIB) criticised the senior management at Mid and West Wales Fire and Rescue, specifically highlighting documentation and procedures for boat operations. Those were out of date, unclear and presented confusing safety messages to the reader.

At about 1125 HRS on 17 September 2019, two fire and rescue service boats were in collision while undertaking boat training and familiarisation in the Milford Haven waterway, resulting in Josh Gardener sustaining fatal injuries.

The collision occurred because both boats were operating at speed and carrying out un-coordinated manoeuvres in the same stretch of the river. The manoeuvres resulted in the boats heading towards each other, and actions taken to avoid a collision were unsuccessful.

Josh joined the fire service in 2018 and was well-known in Milford and he was also a keen footballer.

In what has been described as a ‘totally avoidable death’, questions will now be raised as to whether lessons have been learned within the fire service.

The Herald has obtained evidence to show that Firefighters from Milford Haven station brought up their concerns about the large rib, which killed their colleague Josh Gardener, just a few weeks prior to his death.

The station report, dated August 7, 2019, shows firefighters stating they did not have the training or skills needed to operate the rib, and had asked for management to take action.

Within the report, they said: “Skill sets have eroded with regards to the large rib. Are we likely to be upskilled to be able to perform our duties within our risk area, at present we can’t? “

The concerns were not addressed.

The MAIB report showed a number of safety failing which lead to the avoidable death of Josh Gardener, including;

The chief Inspector of Marine Accidents told The Pembrokeshire Herald in a statement: “This tragic accident could have been avoided had the training activities been properly planned and communicated to all the fire and rescue crew on the water that morning. It was unnecessary for the two boats to be operating in close proximity to each other in a wide stretch of the River Cleddau.

“Neither of the boat’s crew were aware of the other’s intended activities, nor were they keeping an effective lookout as they manoeuvred at speed.

“Our investigation found that elements of the Mid and West Wales Fire and Rescue Service documentation and procedures for boat operations were out of date, unclear and presented confusing safety messages to the reader. In addition, it was found that at a national level, fire and rescue service boats are not being operated consistently to a recognised standard when not on inland flood rescue duties.

“Mid and West Wales Fire and Rescue Service has taken a number of actions following this investigation, but I have recommended that it also review the qualifications required of its boat crews and implement measures to maintain crew competency. I have further recommended that the National Fire Chief’s Council work with the Maritime and Coastguard Agency to introduce a standard code for the operations of its water craft.”

The Fire Brigade Union (FBU) has welcomed the report.

Andy Dark, FBU assistant general secretary, said: “Josh’s death was an avoidable tragedy that occurred during a training event which should have been well-planned and well-controlled.  Our thoughts today are first and foremost with his family and the FBU will continue to provide as much support to them as possible.

“We have seen all too many fatal and near-fatal incidents involving firefighters undertaking water training, both inland and now, in this case, in tidal waters. The report’s recommendations appear to address both categories, which will be crucial to preventing further losses of life.

“The issues identified in this report must be addressed and individual firefighters must not be blamed for systemic, organisational, and procedural failings.

“We broadly support the recommendations of this report, which must be implemented swiftly and carefully, with full oversight of the Marine Accident Investigation Branch. Ministers should take serious note of the need for national standards in this area and develop a comprehensive set of statutory minimum standards for all fire and rescue services in the UK.”

Despite the report showing the safety failing coming from top-level organisational failings, The Herald understands that no senior officers have been held reprimanded or held accountable for the failing which tragically killed Josh.

However one source has told us that two firefighters had been sacked.

The Herald contacted Dyfed-Powys Police and HSE to see if they intended to prosecute anybody for the avoidable death of Josh Gardener following the MAIB report.

A  Dyfed-Powys Police spokesperson said: “Our investigation is ongoing.”

A HSE spokesperson said: “The Marine Accident Investigation Branch (MAIB) has had a specific role to identify cause of accident in this case and has subsequently published a report.  MAIB are not part of the criminal investigation.

“The criminal investigation is being conducted under the auspices of the Work Related Death Protocol led by Dyfed Powys Police who are being assisted by the Maritime and Coastguard Agency and the Health and Safety Executive.  Those investigations are continuing and enforcement decisions will be made when they are complete.”

Mid and West Wales Fire and Rescue Service have been asked to comment.