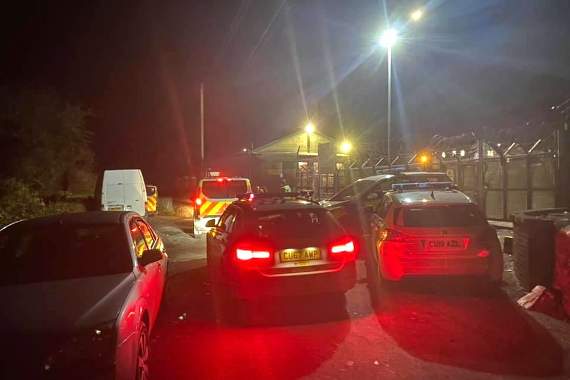 THE POLICE and Crime Commissioner, Mr Dafydd Llywelyn, is today calling for the immediate closure of the asylum accommodation in Penally, Pembrokeshire following a damning inspection report by HM Inspectorate of Prisons (HMIP) and the independent chief inspector of Borders and Immigration (ICIBI).

As well as a lack of Covid protection, fire safety and living conditions concerns, the inspectors found that managers lacked the experience and skills to run large-scale communal accommodation and the Home Office did not exercise adequate oversight. The report also reveals that many residents at the centre said they had mental health problems.

Police and Crime Commissioner Dafydd Llywelyn told The Herald in a written statement: “Following this independent report, and its damning verdict, I am calling for the immediate closure of the asylum centre at Penally, Pembrokeshire.

“I have been in continuous condemnation of the Home Office’s decision to use the camp to house asylum seekers since September last year, and my concerns are vindicated following the Independent Inspector’s initial findings that have been published this week.

“I have seen first-hand the difficult circumstances encountered by individuals residing at the centre. In January, I met with David Bolt, the Chief Inspector of Asylum and Immigration, who reassured me at the time that this independent inspection of the Centre would take place.

“I am now pleased that the report findings highlight the concerns and fears that myself and other local stakeholder have raised with the Home Office on several occasions.

“The lack of strategic planning around the use of camp since September 2020, as well as the lack of community engagement has been extremely frustrating. This has led to unnecessary pressure being put on local resources at a time when we are trying to protect our communities from a global pandemic.

“I am now calling on the Home Office to make alternative arrangements and that we see the closure of the Penally Centre once and for all”.

In a statement released on Tuesday (Mar 9) Plaid Cymru also said Penally Camp should be shut down immediately and have asked local MP Simon Hart to resign.

In a statement, the party said Mr Hart, also Welsh Secretary, should ‘consider his position’ due to ‘his failure to resolve conditions in the camp and consult with local people’

The Plaid comments, made by prospective Plaid Cymru candidate in Carmarthen West and South Pembrokeshire, Cefin Campbell follow a damning report on conditions in the camp by The Independent Chief Inspector of Borders and Immigration and Her Majesty’s Inspectorate of Prisons, describing it as run-down, impoverished, and filthy.

Cefin Campbell said: “These people should not have been located at Penally in the first place. It was a rush job by the Home Office, which resulted in local alarm and degrading conditions for the camp residents. It also caused conflict outside the camp which was a drain on police resources. By keeping everyone in the dark, the UK Government created a dire situation which caused grief all round.

“It’s quite incredible that local MP Simon Hart, a Minister in the UK Government, was not told of plans to house asylum seekers in his constituency by his own cabinet colleagues. It shows that Wales is treated with contempt by the Tory Government in London.

“Throughout this sorry saga, Mr Hart has failed dismally to cope with the situation in Penally, within and without the camp, both as a local MP and Secretary of State for Wales. Due to his failure to be up-front with his constituents and the obvious contempt towards his post as Secretary of State by the Tory Government, he should seriously consider his position. If he can’t influence events of this magnitude in his own constituency what hope is there of Wales benefitting on a wider scale?”

Listen in for top tips to improve health and wellbeing