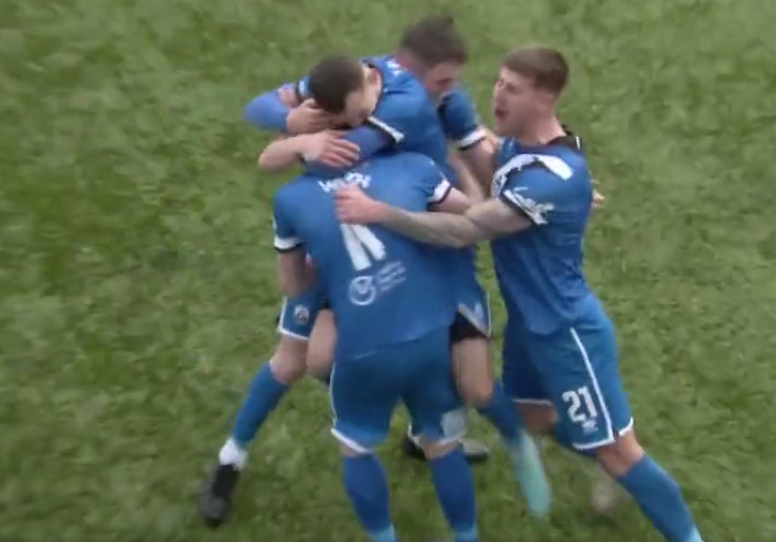 HAVERFORDWEST County ended Phase One of the JD Cymru Premier in perfect fashion with a 2-0 win over bottom side Cefn Druids at The Rock.

First-half goals from Alhagi Touray Sisay and Jack Wilson put the Bluebirds two to the good after just 18 minutes, with County controlling the ball throughout and creating numerous opportunities to extend their lead.

While the sides are only separated by one place in the league table, there was a noticeable difference in the way the two teams approached the game, with the Bluebirds confident to play through the thirds and attack whenever possible.

The victory is County’s first in the league since the end of October, when they beat Newtown 1-0 at the Ogi Bridge Meadow, and provides the team with a real morale boost heading into the start of Phase Two of the season.

In his first game in charge, manager Nicky Hayen made four changes to the side that drew 0-0 with Aberystwyth Town a fortnight ago, with Jazz Richards and Alaric Jones returning from injury, Kurtis Rees replacing Corey Shephard in midfield and Touray Sisay selected to partner Jordan Davies up top. Captain Dylan Rees missed the game through suspension, after receiving his fifth yellow card of the season against Aber last time out.

County started the game on the front foot, and were rewarded for their positive intent when Elliot Scotcher’s free-kick from the right side found it’s way through to an unmarked Touray Sisay in the middle of the goal, and the striker tapped in from close range to give the Bluebirds the perfect start.

Hayen’s side only had to wait two minutes to double their lead. Touray Sisay offloaded the ball to Wilson just outside the area, and the wing-back took a couple of touches before firing a rocket of a shot into the top right corner, leaving goalkeeper Michael Jones with no chance.

There was one negative from a hugely encouraging first-half, with midfielder Kieran Lewis forced off after 37 minutes, with Ricky Watts coming on in his place.

Having been untroubled by the Druids attack in the first-half, County nearly gave the hosts a way back into the game when a stray pass inside their own penalty area handed possession to Niall Flint, but Lee Idzi did well to get down and save his shot from close range.

Keen to extend their advantage in the early stages of the second-half, the Bluebirds nearly made it 3-0 when Davies was freed down the left side by Watts, before he turned and chipped a cross into the area which picked out Touray Sisay, but his effort came back off the left post.

Despite this missed chance, the striker was having an impressive afternoon, and he continued to cause the Druids defence problems, with Flint and Phil Mooney both shown yellow cards in quick succession for fouls on the front man.

Shortly after replacing Richards, wing-back Ryan George had a chance to shoot from inside the area, but the Ancients defence were able to snuff out the danger just in time.

The final chance of note for the Bluebirds came with five minutes remaining, when Scotcher’s cross from the left side hit the crossbar and rebounded back into play, but the awaiting Jones couldn’t direct his header goalwards from a couple of yards out.

In stoppage time, Hayen handed debuts to Alex Worley and loanee Caleb Hughes, who joined the club in the January transfer window.

The victory sees the Bluebirds move to within one point of 10th placed Barry Town United, who lost 2-1 at home to Caernarfon Town.