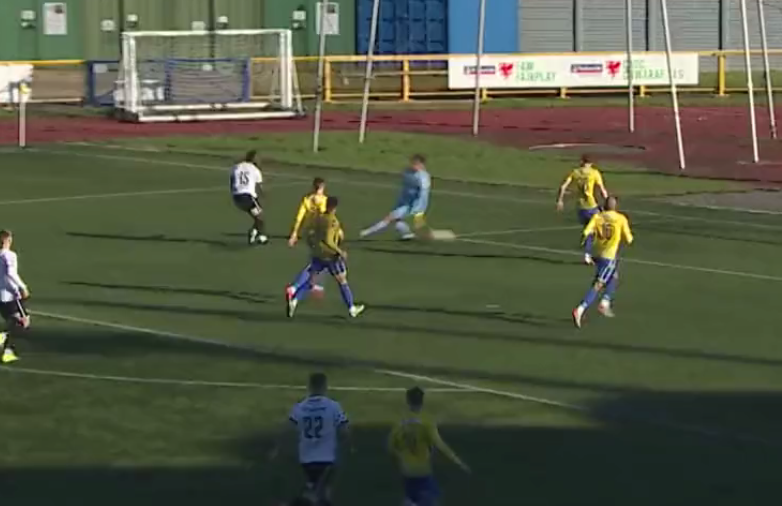 ALHAGI Touray Sisay’s goal two minutes into the second-half was enough to give Haverfordwest County an important 1-0 win over 10-man Barry Town United in our opening game of Phase Two in the JD Cymru Premier.

After a relatively even first-half at a sun-drenched Jenner Park, the striker found the net from a tight angle shortly after the interval, and it proved to be the winning goal as County recorded consecutive victories in the league for the first time this season.

The hosts had opportunities to level the scoring, and thought they had done so when Clayton Green’s header from close range was pushed onto the crossbar by the impressive Lee Idzi, with the officials ruling that the ball had not crossed the line.

This victory sees the Bluebirds leapfrog the Dragons into ninth place in the standings, three points behind Cardiff Metropolitan in seventh – who currently occupy top spot in the Play-Off Conference.

Manager Nicky Hayen made three changes to the side that beat Cefn Druids 2-0 last week, with captain Dylan Rees returning from suspension while Corey Shephard and Ricky Watts came into the midfield in place of Kurtis Rees and the injured Kieran Lewis.

The first opportunity of the game fell County’s way. Dylan Rees’ ball over the top picked out Touray Sisay, but the striker saw his shot from inside the area saved by Kelland Absalom.

The Bluebirds had been on the front foot in the opening 15 minutes, but they had to be alert defensively when Jordan Cotterill found space before seeing his shot blocked by Elliot Scotcher.

County’s best opportunity of the half fell to Jordan Davies. After squick interplay in the attacking third, the ball was worked to the unmarked striker on the right side of thee area, but his shot was parried onto Touray Sisay by Absalom, before rebounding back into his grasp.

On the half hour mark, Idzi pulled off an excellent diving save to deny Rhys Abbruzzese’s speculative effort from distance, before getting down well to save Rhys Kavanagh’s shot from close range shortly after as the team’s went into the break level at 0-0.

However, a matter of minutes after the restart, the Bluebirds countered at pace before the excellent Shephard slid a through ball into the path of Touray Sisay, which he calmly slotted between the legs of Absalom to give County the lead.

This goal gave Hayen’s side confidence, as they continued to be on the front foot and looked the likelier team to find the second goal of the afternoon.

But just before the hour mark, the Linnets thought they had drawn level. A free-kick from the right side was met by the head of captain Green, with the ball coming back off the right post and into the path of Idzi, who pushed it onto the crossbar before Scotcher hooked it to safety.

Gavin Chesterfield’s side claimed the ball had crossed the line, but the officials ruled otherwise and the score remained at 1-0.

Green was involved again five minutes later, again with a header, but this time he couldn’t direct it on target as the ball flew wide of the right post.

With just over 20 minutes remaining, the hosts were reduced to 10 men when Cotterill was shown a second yellow card for a late challenge on Dylan Rees.

This allowed County to lower the tempo and see out the game relatively unthreatened in the closing stages, as Hayen’s side held on pick up a crucial three points.

Next up for the Bluebirds is Cefn Druids at the Ogi Bridge Meadow next Saturday, March 12 (Kick-off: 14:30). The game will see Hayen take to the home dugout for the first time since being unveiled as our new manager,