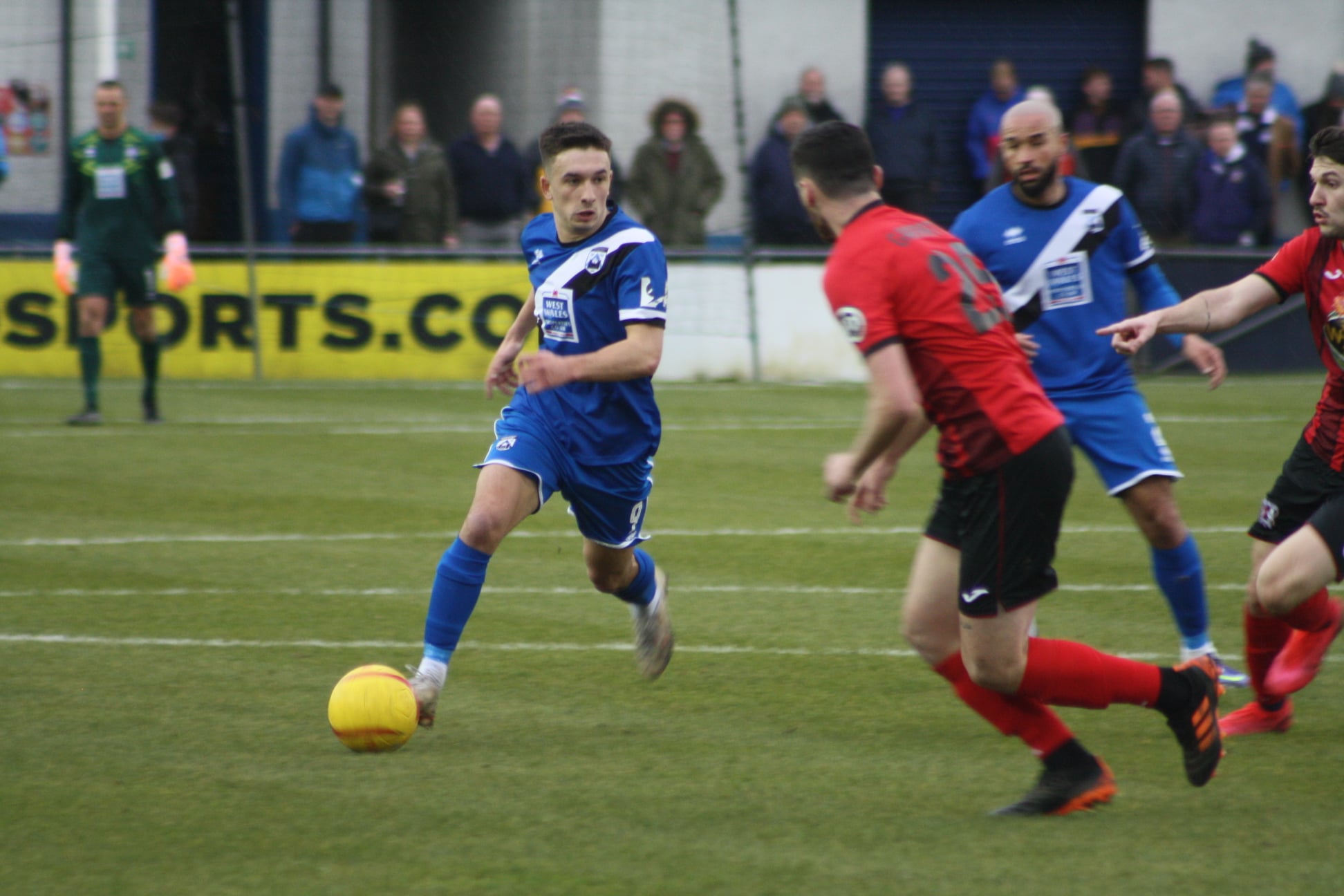 Ben Fawcett scored a brace to take his goal tally for the season to seven, as Jack Wilson, Alhagi Touray Sisay and Danny Williams also found the net on an afternoon which also saw loanee Jordan Davies get off the mark for the Bluebirds.

The margin of victory is County’s joint-second highest in top-flight history, with their previous 6-1 success coming against Airbus UK Broughton in the 2004-05 season.

The result sees the Bluebirds move up one place to eighth in the overall standings, and second in the Play-Off Conference, three points behind Cardiff Met in seventh.

Manager Nicky Hayen, who was taking charge of his first game at the Ogi Bridge Meadow, made one change to the side that defeated Barry Town United 1-0 last week, with Fawcett replacing Williams in the starting lineup.

County were on the attack right from the first whistle, with Wilson’s cross from the edge of the area deflected into the hands of Druids goalkeeper Michael Jones.

Davies went close shortly after when he cut inside onto his right foot, before curling narrowly wide of the right post from just outside the area.

Fawcett’s first involvement of what would prove to be a busy afternoon was to see his shot from inside the area saved low down by Jones.

Just minutes later, Davies’ dangerous chipped cross into the area somehow managed to evade everyone and roll away to safety.

The best chance of the first-half came when Elliot Scotcher’s free-kick was blocked, but only into the path of Touray Sisay, who controlled the ball with his foot before heading it over Jones into the path of Wilson, but he was unable to direct it goalwards and saw his header come back off the crossbar.

The Bluebirds defence did well to scramble and block Liam Thomas’ shot from inside the area in first-half stoppage time to ensure the teams went into the break goalless.

However, in the exact same fashion as they had done against Barry the week before, County found the net just a minute after the restart. After Wilson had headed the ball back across goal, the Druids could only clear into the path of Fawcett, and he was on hand to strike first time into the right corner to give the Bluebirds the lead.

The Ancients responded just minutes later though. After winning the ball back high up the pitch, Thomas sprinted to the byline before squaring to Jelson Antonio, who benefitted from a slight touch off Scotcher before tapping in from point-blank range to make it 1-1.

Wilson and Corey Shephard both went close to putting the Bluebirds ahead again, but it was Davies who restored the hosts’ advantage when Wilson’s cross to the far post found the striker, and his clever touch took him past Jones to allow him to tap into an empty net.

Wilson again went close when he scuffed his effort just wide from inside the area, but he was not to be denied 10 minutes later when he showed excellent technique to let a high ball come down to him before hitting it first time and finding the right corner for his second goal of the season contender in a matter of weeks.

Things got even better for the Bluebirds when Fawcett’s strike from distance took a touch off an Ancients defender to direct the ball into the bottom left corner to make it 4-1.

There was still time for County to find the net on two more occasions in the closing stages. Firstly, Touray Sisay pounced on a loose ball inside the area to chip over Jones for his eighth league goal of the season, before Danny Williams finished off what could well be the team’s most impressive goal of the season to date.

An attack, which started with goalkeeper Lee Idzi, saw the Bluebirds complete 18 passes as they worked their way up the field, before Fawcett’s crisp pass to Shephard was directed into the path of Williams with an eye-catching flick, and the substitute took the ball around Jones to roll into an empty net and round off an excellent afternoon for Haverfordwest County.

The Bluebirds are next in action on Tuesday evening, when they travel to Park Avenue to take on Aberystwyth Town. Kick-off is at 8pm.