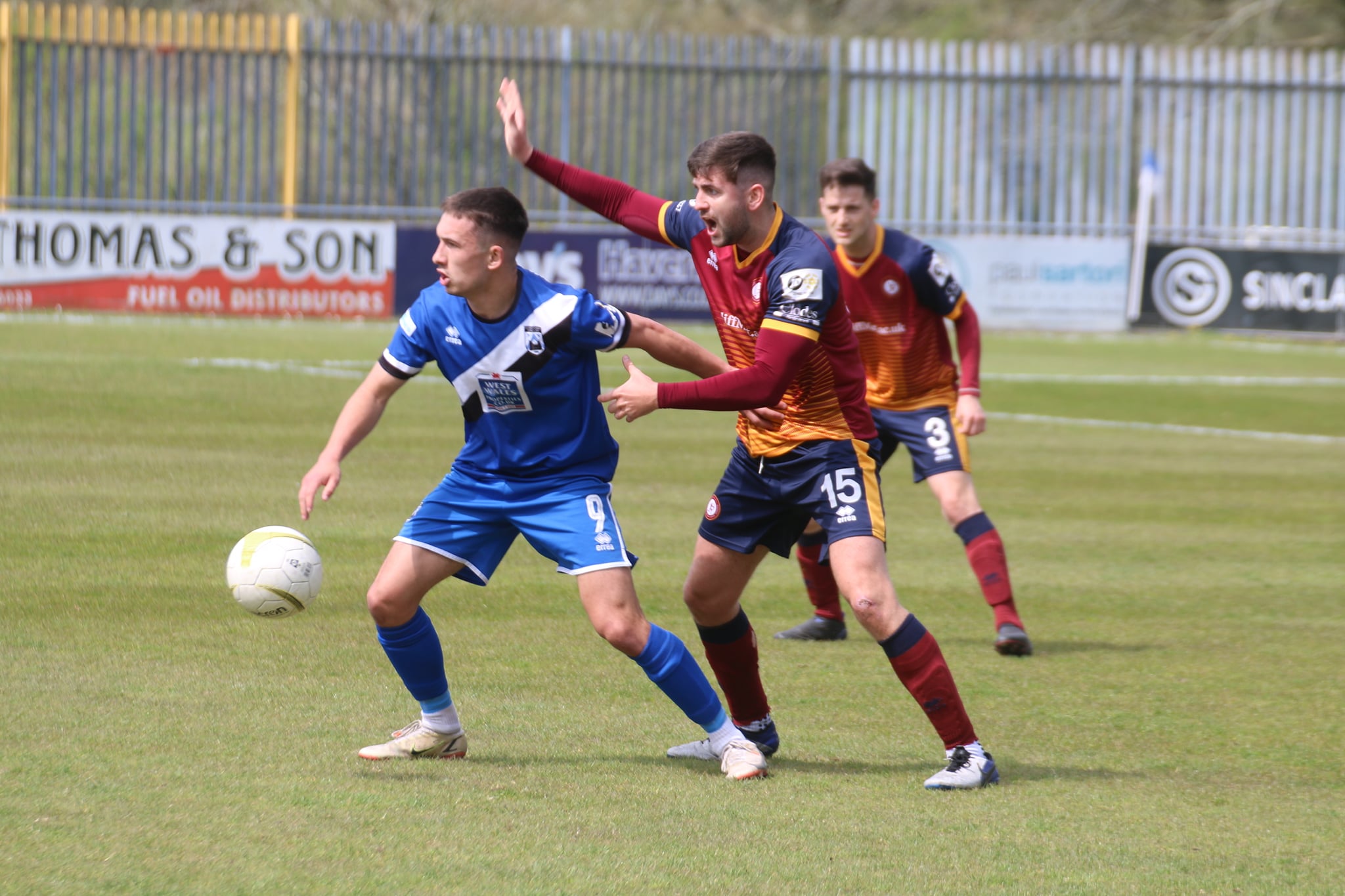 HAVERFORDWEST County were narrowly defeated 2-1 by Cardiff Metropolitan yesterday, as the JD Cymru Premier season drew to a close in front of a big crowd at the Ogi Bridge Meadow.

Over 700 people were in attendance on a sunny afternoon in Haverfordwest, and they may have thought the Bluebirds were on the way to victory when Ben Fawcett gave County the lead just after the half hour mark.

However, two goals in three minutes shortly before half-time from Joe Evans and Kyle McCarthy saw the Archers – who were being managed by Christian Edwards for the final time in regular league action – turn the game around, and they held on to claim the victory which clinches seventh place.

The result means the Bluebirds have to settle for 10th place, which ultimately marks a successful season with Nicky Hayen’s side securing their place in the top-flight for next season.

Hayen made two changes to the team from Monday’s defeat to Connah’s Quay Nomads, with Kyle Patten and Jordan Davies returning to the starting lineup in place of Ryan George and Ricky Watts.

And County made a positive start to the game, with Jack Wilson fizzing a ball across the face of goal which somehow managed to miss everyone, before Fawcett’s strike from just outside the area was well saved by Alex Lang.

Davies was next to go close when his shot from inside the area went just wide of the right post after the strike was played in by Henry Jones.

The Bluebirds defence had to be alert to block Eliot Evans’ volley from the edge of the area, before Davies had a second opportunity which he blazed over the crossbar.

Hayen’s side were ahead just a minute later though, when a pinpoint pass upfield by Jazz Richards fell into the path of Fawcett, who took a touch to control before sliding the ball past Lang for his eighth league goal of the season.

The lead would only last four minutes, however, when Eliot Evans’ corner picked out namesake Joe, who headed into the net to bring the visitors level.

And the comeback was complete with four minutes to go before half-time when McCarthy tried his luck from distance and unleashed an unstoppable effort which flew into the top left corner – leaving goalkeeper Lee Idzi with no chance.

Keen to turn the game back in their favour and send the supporters home happy ahead of next season, County were the team in the ascendency in the second-half.

Davies put the ball into the net just after the hour mark, but the linesman’s flag went up for a tight offside as the scoreline remained 2-1.

The on-loan forward went close with less than 20 minutes remaining when the ball bobbled around inside the penalty area before falling into his path, and he tried an overhead kick which went agonisingly over the bar.

Hayen’s side kept the pressure on as they searched for an equaliser in the closing stages, with Davies poking an effort just wide and Henry Jones’ shot from 30 yards out just going over the bar.

With five minutes added on at the end of the 90 minutes, there was still time for the hosts to find a dramatic late equaliser, and those in attendance must have thought it was about to come when Davies’ cross from the left picked out Henry Jones inside the area, but his header from a few yards out came back off the bar.

This was to be the final action of a gripping contest in front of the Sgorio cameras, as the Students held on for victory to rubber stamp their place in seventh.