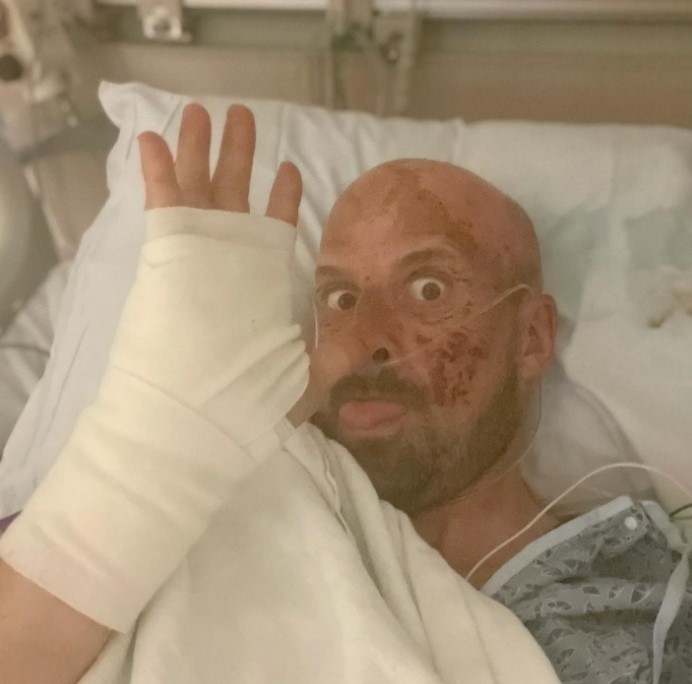 A WELL-KNOWN Pembrokeshire stuntman has been left paralysed after becoming crushed between two suspended cars.

Jonathan Goodwin, from Pembrokeshire, was previously a contestant on Britain’s Got Talent, plummeting 30ft to the ground after a stunt went badly wrong.

In October 2021, Jonathan, was suspended 70ft in the air in a straightjacket, between two suspended cars.

During the rehearsal for America’s Got Talent: Extreme, Jonathan was supposed to escape the straitjacket and land on the air mattress below before the suspended cars collided.

However, something went drastically wrong, when the two cars collided, crushing Mr Goodwin, and bursting into flames.

The stuntman fell 30ft and missed the intended target and landed on the floor below.

Jonathan was left with life changing injuries, including: two broken shoulder blades, third degree burns, a severed spinal cord, a broken spine and shattered both of his legs.

Jonathan is no stranger to death defying stunts, after previously having his own TV show: The Incredible Mr Goodwin, where he famously dangled in a straitjacket from a blazing rope over the River Thames.

Explaining the ordeal on Jay Rayner’s Out To Lunch podcast, Goodwin’s fiance said: “He fell 30ft and lost a kidney, broke both shoulder blades, shattered both legs, third degree burns, broke his spine and severed his spinal cord and nearly died.

“And then on the operating table he nearly died again.”

Taking to his Instagram page, Mr Goodwin posted a selfie from his hospital bed thanking people for their well wishes and support.

He went on to say: “A couple of days ago my life took a complete left turn, and the outpouring of love from all corners of the world; from people I didn’t even think would know or remember me, has just been astonishing. Truly Incredible.”

Even though Jonathan now has to use a wheelchair, he hinted that he is not going to abandon doing what he loves, adding: “To death I say nananana boo boo, and to the rest of you, watch this space.

“There is a long road to recovery and that wont look like what it did. I may leave the daft s*** alone for a while, but I have a lot left to do in this world.

“Maybe we can make something good together?”

Speaking on Jonathan’s strength and character, Fiance Amanda gushed: “His courage and his strength is something that I just aspire to be like. He’s just incredible, honestly, like so happy, just like a very happy, positive human being, just liquid sunshine.

Saundersfoot pub aims to raise £20,000 at a charity weekend for Queen’s Platinum Jubilee