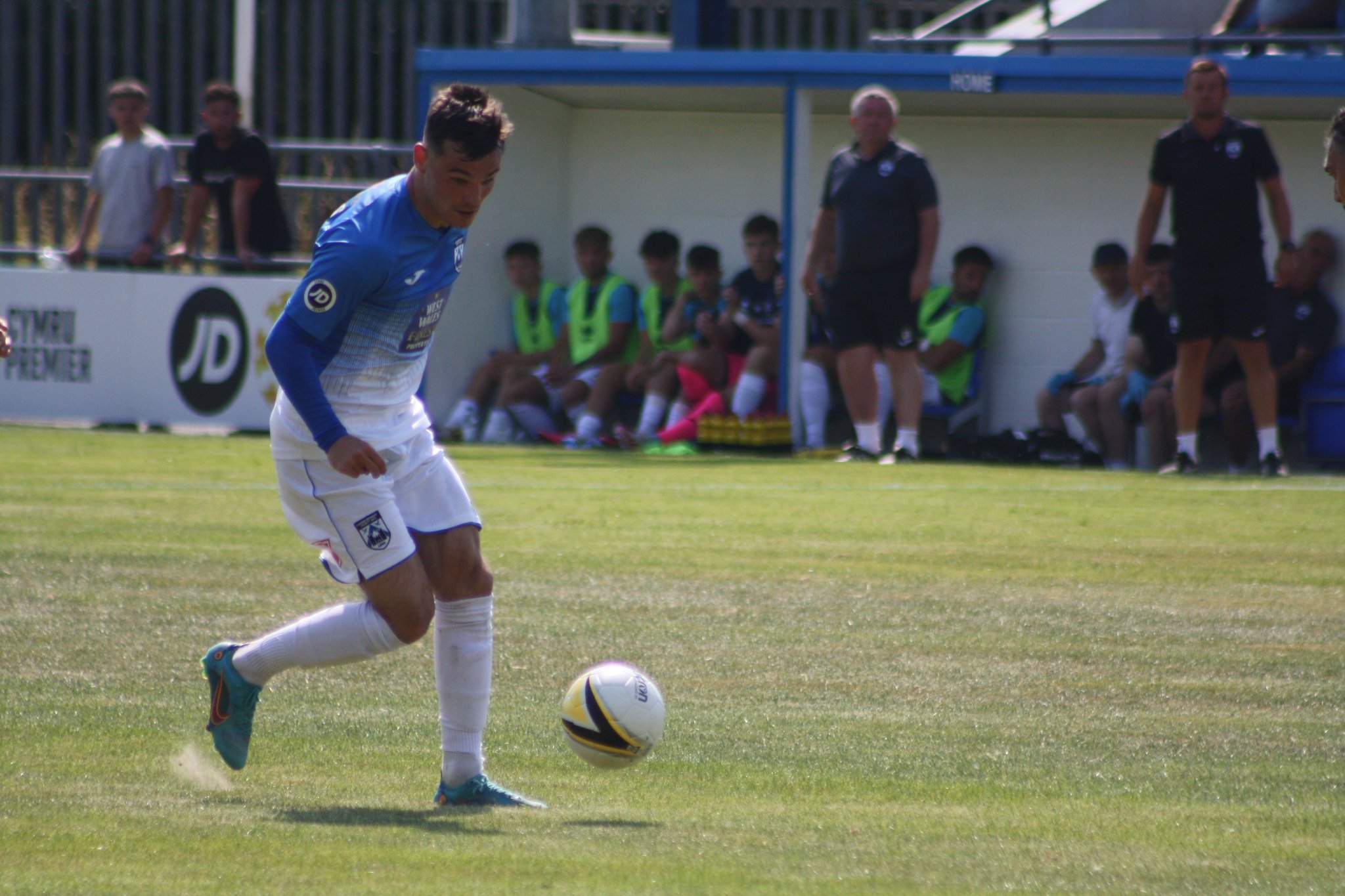 HAVERFORDWEST County kick-started their 2022-23 JD Cymru Premier campaign with a 1-0 victory over Caernarfon Town at the Ogi Bridge Meadow on Saturday (Aug 13).

Jordan Davies’ header with 10 minutes remaining was enough to give the Bluebirds all three points, as they marked manager Tony Pennock’s first league game in charge in winning fashion.

In sweltering conditions at the Ogi Bridge Meadow – with the temperature reaching a high of 32°C – both teams showed impressive fitness levels to stick to their task throughout the 90 minutes.

County showed positive intent right from the off, with Jack Wilson having a couple of opportunities inside the opening six minutes which goalkeeper Josh Tibbetts was equal to.

Henry Jones then put a ball into the area which picked out Jordan Davies at the back post, but the forward was just unable to bring it under his spell to get a shot away.

Wilson had another chance not long after when Ryan George showed jet heels to beat his man before putting a ball into the area which picked the forward out, but his effort went over the crossbar.

Despite their early pressure, the Bluebirds could have found themselves behind but for some excellent last-ditch defending which saw Sion Bradley’s shot from inside the area blocked on its path to goal.

Striker Ben Fawcett was next to have an effort on goal when he picked the ball up from Jordan Davies and got a shot away, which was heading for the right corner, but Tibbetts got down to produce the save.

With the searing heat in mind, two water breaks were scheduled to be taken 25 minutes into both halves. While there was a risk that this stoppage in play could have taken some of County’s tempo away, this was not to be the case as they continued to play on the front foot.

The best chance of the first-half came 10 minutes before the break, when George again beat his opposite number and put a ball into the area which found Fawcett, but after having a couple of efforts from a few yards out, the ball was somehow kept out of the net.

The second-half followed a similar pattern to the first, with County dictating the play against a well-organised Canaries side.

Pennock’s side created three chances in as many minutes in the early stages of the second period, with Lee Jenkins – who was making his Bluebirds top-flight debut – heading just wide from a free-kick, before Jordan Davies’ cross-cum-shot was palmed behind from a corner and Fawcett had his shot from inside the area deflected just wide.

The game lost some of its tempo for a 15-minute period, but it was sparked back into life when Henry Jones’ shot from inside the area was inadvertently blocked on its path to goal by a teammate.

With the final 10 minutes approaching, it looked as if the match might be heading towards a stalemate, however the Bluebirds were finally able to make their pressure tell.

Henry Jones picked the ball up on the left side and delivered a pinpoint cross into the area which found Jordan Davies at the far post, and the striker guided his header home to send the home supporters wild and get his team off to a winning start to the Cymru Premier season.

Haverfordwest County are next in action on Saturday, August 20, when they travel to Maes Tegid to take on Bala Town (Kick-off 2.30pm).

Who needs what on the final day of the cricket season?