Children from Johnston C.P. School: Listening to the story of Henry Tudor at Carew Castle

Children from Johnston, Orielton and Sageston C.P. Schools were treated to an energetic one-man show, in which Henry Tudor (Henry VII) detailed how he was born at nearby Pembroke Castle and fled to France before eventually returning to defeat Richard III at the Battle of Bosworth and be crowned king.

Carew Castle and Tidal Mill, which is managed and run by the Pembrokeshire Coast National Park Authority, also hosts a packed programme of public activities and events each year, which help bring the site’s fascinating 2,000 year history to life.

Park Authority Chief Executive Tegryn Jones said: “It’s fitting that this story was told at Carew Castle, which was at one time the home of Sir Rhys ap Thomas, who is credited by some with killing Richard III at the Battle of Bosworth, handing the crown to Henry Tudor.

“A lasting reminder of Carew’s links to this fascinating period in British history can be seen inside the castle where the coats of arms of Henry VII, his son Arthur, Prince of Wales, and of Arthur’s wife, Catherine of Aragon, are still present today.”

The festival’s creator, Eleri Twynog Davies, added: “Welsh history is rich with dynamic, charismatic characters and this festival offered a wonderful opportunity to introduce those characters and more to children via lively shows which will feed the imagination.

“The fact that the festival was held at historic sites linked to each character added an extra dimension and will allow youngsters further opportunities to learn more about our history.

“I’m very grateful to all the partners who have embraced the idea of a festival so warmly and am delighted so many schools signed up to be a part of this inaugural month-long event. I hope, in future, to develop the festival into an annual event, so that many more generations of children can learn more about their history and heritage.” 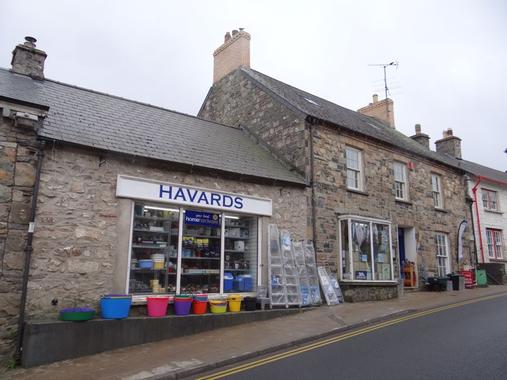 A NEW community initiative is being launched in Newport, Pembrokeshire to ensure the much loved Havards Shop is kept as a hardware shop for Newport and surrounding areas.

For those who know Newport, Pembrokeshire the Havards Shop is not just a traditional hardware shop but has a considerable amount of essentials and gifts for locals and visitors alike.

The current owners, Bryce and Sonnie Barrett wish to see the community having a chance to purchase and retain the shop and have it as an additional hub for the community.

The shop has been on the market for many months and the option of a community run cooperative shop is one that is now being seriously considered by the locals.

Adrian Varney who is on Newport Town Council contacted Cris Tomos of PLANED to gain support with the initial development phase of seeking funds as community shares and loans from local people.

The local town councillor, Adrian Varney noted, “the shop is an important building in the town and so many generations have supported and continue to rely on the shop for hardware and gift items. we have to look at a local solution to retaining the Havards shop”

The current owners Bryce and Sonnie Barrett commented, “A community purchase would ensure the character of the shop is retained and future generations can have a shop such as this within the community” they added “We would ensure that all the current business supplier contacts and electronic till and stock control systems that we have developed would be handed over and we would wish to fully support the new community team on how to manage the business successfully”

Anyone who would wish to consider investing in the community project can pick up a pledge form in the shop or on the new community shop Facebook Page that will be launched shortly. Also anyone who has time to join the new community committee can fill in an application form at the shop.

Cris Tomos concluded “Local shops are  now being taken on by many communities around the country and there is comprehensive support for community groups, also for investors there will be a opportunities for annual dividends/interest dependant trading profits and an investors tax relief of up to 30% return for UK taxpayers under the HMRC scheme known as Social Investment Tax Relief.”