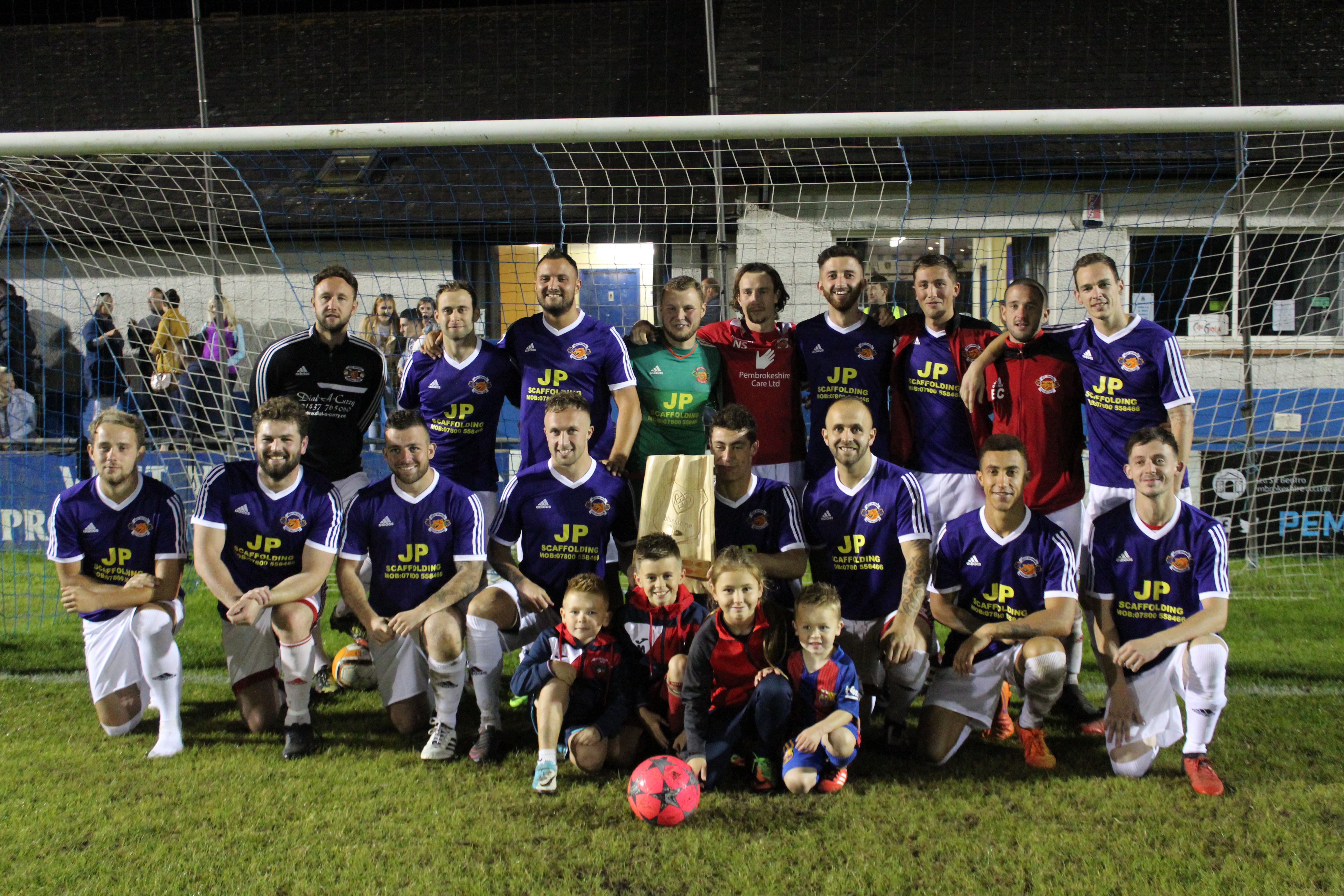 WEST DRAGONS won the inaugural Bluestone Foundation Shield after they beat Bluestone 4-2 in a penalty shoot-out after a thrilling ninety minutes of football.

The final was played at the Bridge Meadow Stadium, Haverfordwest, on Friday, September 1, and a good crowd gathered to show their support.

Bluestone made an excellent start to the match and with only two minutes gone they stunned the Dragons as Bradley Hewett broke free and buried his shot into the bottom right corner of the net.

Dragon’s Tony Evans came close to a response for his side but after he cut inside his shot was saved.

With sixteen minutes on the clock the referee adjudged that Bradley Hewett had been pulled down in the area and pointed to the spot. Captain Ian Darbyshire took the spot kick and buried it into the net to double Bluestone’s lead.

Davies could have added a third just moments later but after he rounded the keeper he was met by the Dragons defence who were able to clear the ball.

Daryl Mansbridge had a chance for the Dragons with a free kick on the edge of the box but his shot went over the bar.

Shortly before half time the Dragons pulled a goal back as Jordan Williams ran into the box before Scott Crawford took over and fired the ball into the net.

Early in the second half, the Dragons came agonisingly close to equalising as Crawford’s fierce strike cannoned back off the crossbar.

Bluestone also had former Swansea City player Lee Trundle in their team and he came on with half an hour to go.

Dylan Davies came close for Bluestone as his run ended with him firing the ball just over the bar.

With twelve minutes to go the Dragons equalised from a corner as Crawford poked the ball home at the back post.

Assist: Lee Trundle came on and set up a goal for Bluestone

However, just five minutes later, Bluestone restored their lead as Trundle controlled the ball well before crossing to the back post for Llew Jones who composed himself after missing his first shot to fire into the roof of the net.

Those celebrations were short lived as Dorian Davies, after seeing his free kick blocked, reacted well to volley the ball into the bottom left corner of the net and make it 3-3.

There was still time for another chance and Trundle showed his trickery before being fouled but his resulting free kick was blocked by the wall.

Referee Paul Rooney called time on a thrilling match meaning penalties would be needed to decide the game.

Both sides scored their first penalties but Ewan Cunningham saw his spot kick saved by Bluestone keeper Chris Lo, only for Darbyshire to see the following kick tipped over the bar by Ben Henton.

Allen scored his next penalty for the Dragons but Henton again saved to give his side the advantage.

After eight penalties the Dragons led 3-2 and it was left to Ashley Prior who buried his effort to seal a first Bluestone Foundation Shield win for West Dragons.

After the match, it was announced that the tournament as a whole had raised over £1000 which will benefit projects within Pembrokeshire.

Bluestone Foundation Chairman Frank Atkins thanked those who attended and everyone who was involved with the tournament, including Ian Darbyshire, who first came up with the idea of the tournament.

Controversial cricket match to be investigated