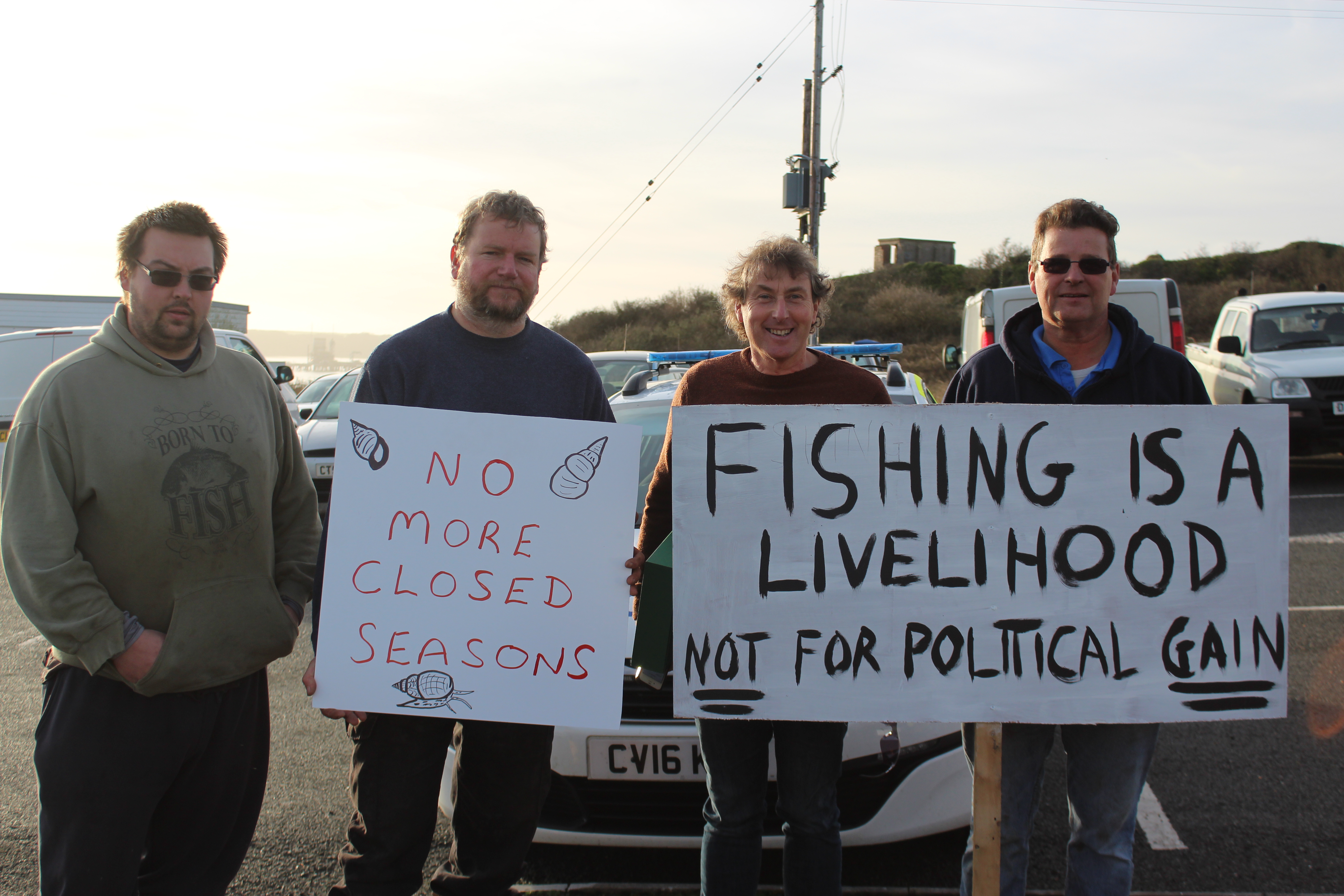 FISHERMEN from across Wales gathered outside Milford Haven Port Authority in Hakin on Monday afternoon (Dec 18) to protest against planned fishing restrictions.

Around 30 angered fishermen had hoped to speak to Assembly Member Lesley Griffiths who was attending a meeting at the Port Authority.

Stephen De-Waine of the Pembrokeshire Fishery had wrote a letter to the AM imploring her to open her eyes and meet fisherman to understand the problems that would arise should the restrictions be imposed.

In his letter he also accused the Welsh Government of miss-managing fisheries in Wales and failing to secure adequate deals.

Mr De-Waine, who has been fishing since he was 18, told the Herald: “in 2010 Welsh Government took over responsibility for the fisheries and since then they have been eroding our fisheries. We started off in Wales with seven fisheries, they’ve closed two, they’ve put restrictions and closures on some of the others and they’re looking to put restrictions on the other ones.

“They’re not fighting on our behalf to maintain the industry so we are losing it. This, today, is a protest for the minister to say to her that she’s got to open her eyes and start paying attention to what is going on otherwise she is going to lose the fishing industry.

“Our message to the AM is that she has to open her eyes and see what the restrictions she is bringing in place for the fishing industry is doing to the industry because she is driving the industry into poverty.”

It is hoped that inshore fisheries can be restored and that no more restrictions or closed seasons be put in place.

Those who were at the protest held a number of banners stating that the Welsh Government had ruined a number of fishing industries, calling them ‘out of control’ and calling for no more closed seasons adding ‘enough is enough’.

Mark Dellar, of the Teifi Coracle Netsmen Association, told the Herald: “I’m here today because Natural Resources Wales have put a proposal out to restrict our fishing seasons and we believe it’s not justified, they’re trying to restrict us for two months of the season and also to support the rest of the fishing industry.

“We’re also trying to enlighten the minister as to what’s happening as we believe she hasn’t got all the information in front of her.”

The fishermen waited outside the Port Authority offices for over an hour hoping to speak to the minister.

However, when she arrived she was taken down to the main building and only took the letter from Stephen De-Waine before going inside.

It left many fishermen disappointed that they had not had the opportunity to speak to her.

Council ‘white elephant’ likely to be sold off