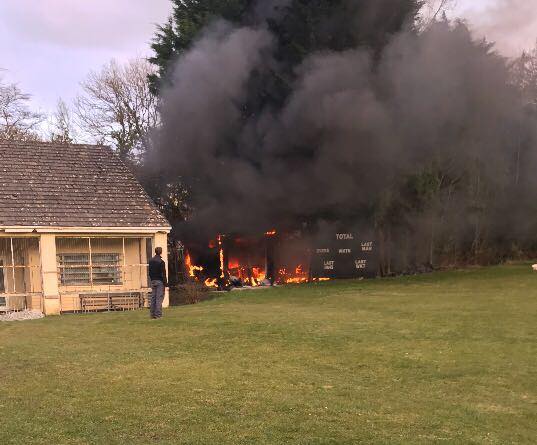 DYFED-POWYS Police is currently investigating an incident of arson which has destroyed equipment belonging to Saundersfoot Cricket Club.

The incident took place on Tuesday, February 27, and it is believed that the fire was started deliberately.

It is likely to leave the club with a hefty bill to fix the damage right before the start of the new cricket season which begins on April 22.

Saundersfoot Cricket Club Chairman Roger Stanford told the Herald: “We have had ongoing problems on the field and the changing rooms for some time now but this is more sinister than anything else.

“It is a nuisance as we now have to take everything down to clear it. We were given the shed by SWALEC. We had a trailer in there along with plastic chairs and other equipment.

“It is lucky that the Fire Brigade got there when they did as the trees were on fire next to it, the fence was also charred and just the other side of the fence there is a Caravan Park so it could have been a lot worse.” Mr Stanford added that the repair costs would be a four-figure sum and said they would need to meet with the insurance companies first to discuss it.

A spokesperson for the Police said: “Dyfed-Powys Police is investigating after a shed at King George Fields, Saundersfoot, was set alight.

“It is believed the fire was started deliberately, and has destroyed the shed.

“The incident was reported at around 5pm on Tuesday, February 27. Anyone with information that could help the enquiry is asked to contact 101.”

A spokesperson for Mid and West Wales Fire and Rescue Service added: “On Tuesday, February 27, at 05:14pm, crews from Tenby were called to a fire in Milford Street, Saundersfoot.

“The Fire Service made the area safe and left the incident with the Police at 05:58pm.”

It is not the first time the club that the Cricket and Football clubs have had to deal with issues such as this, as in September 2017, triathlon spectators parked on the pitch which led to it being cut up and, in the words of the club, ‘ruined’.

Saundersfoot Cricket Club has two senior teams along with a number of junior teams.