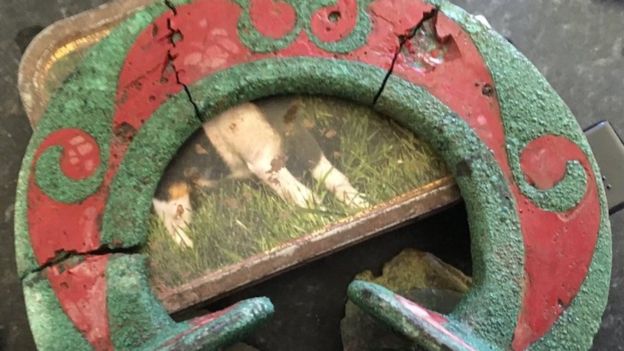 THE FIRST example of a Celtic chariot burial in Wales is thought to have been found in south Pembrokeshire by a metal detectorist.

The site, which is believed to be part of a greater Iron Age settlement, is being kept secret by National Museum Wales until a more comprehensive dig can be carried out. Mike Smith, of Milford Haven, is a member of the Pembrokeshire Prospectors, and first found the pieces of metalwork in February, after his preferred detecting site was flooded, forcing him to look elsewhere.

He originally believed the first piece to be a medieval brooch, but upon further research, an expert informed him that it was in fact part of a bronze Celtic horse harness from roughly 600BC.

The bronze was green from corrosion, yet the red enamelling had not faded with time, and when Mr Smith returned the next day, he found further bridle fittings, a brooch and tools. The excavation also revealed the rims of two rusted iron chariot wheels, whilst a pony’s tooth found next to the bridle revealed the site to be a Celtic chariot burial, the first of its kind to be found in Wales.

Chariot burial was an Iron Age Celtic custom, reserved for those of high status, and often included grave goods symbolising the wealth of those buried. The wooden chariot would soon decay, but the bronze horse harness and iron wheel covers remain to this day.

The Celts as an ethnolinguistic group were once found across Europe, their influence stretching from Ireland to Anatolia, and chariot burials have been documented across the continent.

Around 20 Iron Age chariot burials have been excavated in Britain, roughly dating from between 500 BC and 100 BC, with the vast majority found in north-east England.

It is thought that ploughing would have gradually brought the burial closer to the surface, and a full excavation has been planned for next year, as work stopped after a week due to funding running out.

The research is by no means complete, as scans revealed a three-metre metal anomaly beneath the chariot, but the site now has legal protection, and the dig shall wait until the soil is damp and less compacted.