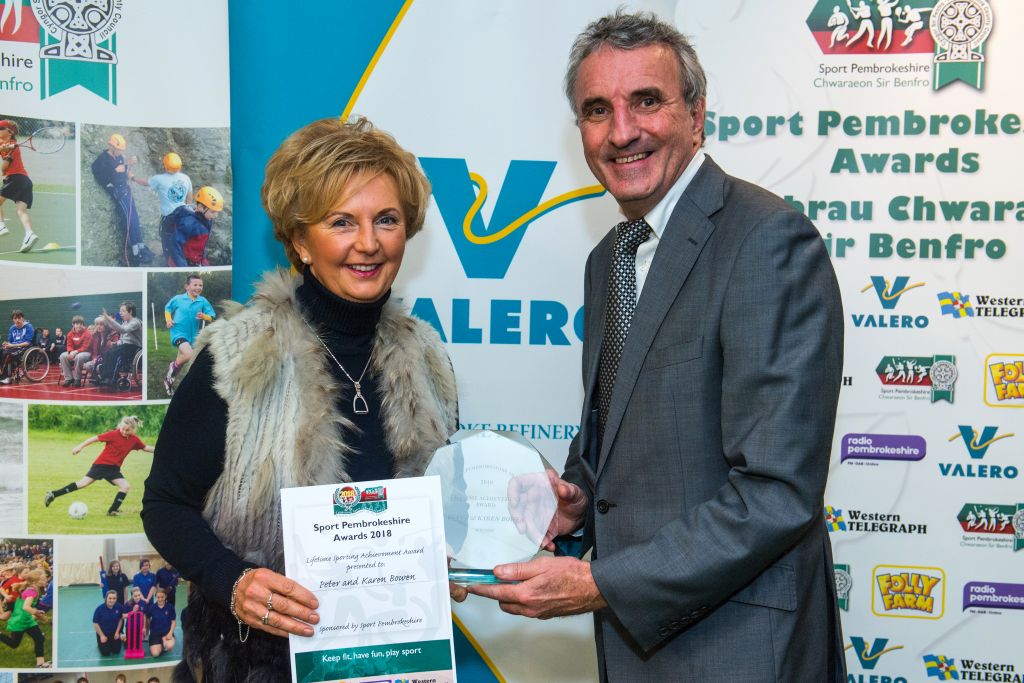 INSPIRATIONAL achievements in sport by were celebrated in the prestigious Sport Pembrokeshire Awards 2018 on Friday evening.

Now in its 12th year, the gala ceremony at Folly Farm was hosted by sports journalist Bill Carne and Cllr Huw George and organised by Sport Pembrokeshire, the sport development team at Pembrokeshire County Council.

The Lifetime Achievement award was presented to Peter and Karen Bowen described by Geoff Williams, Head of Sport at BBC Wales, as a couple ‘at the forefront of British horse racing’.

Presenting them with their award, he said: “Peter and Karen Bowen have transformed a bungalow and a few fields into one of the best yards in the United Kingdom. Their complex at Letterston now boasts over seventy boxes and state-of-the-art all weather facilities.

“But team Bowen is very much a family outfit. Karen was no stranger to the show ring, and is a former champion point-to-pointer. Eldest son Mickey has built a reputation as a successful point-to-point trainer; and Sean and James are both professional jockeys. James became the youngest ever winner of the Welsh Grand National this year, aged just 16.

“Incredibly, the stable is now on the verge of achieving a thousand winners.” The Special Achievement Award, presented by the Chairman of Pembrokeshire County Council, was presented to 27-year-old footballer Kristian Speake from Crundale.

“The Award is given to a sportsman or woman who has overcome great adversity – and tonight’s winner is certainly no exception,” said Cllr Aden Brinn, Chairman.

“Kristian played for Haverfordwest AFC until last February when he was grievously injured in an incident in the town which resulted in a serious injury to his skull.

“He was in a coma for 24 days in the intensive care unit at the University Hospital of Wales in Cardiff before being placed on a neurological ward for several weeks.

“Kristian then spent a further six weeks in a special unit in Port Talbot where he underwent extensive physical and cognitive rehabilitation. During this time, he had three eye operations as well as brain surgery in which surgeons fitted a titanium plate in the right side of his head.

“However, there is a happy ending. Though his determination and the support of his family and friends, Kristian has made a miraculous recovery and completed the Cardiff half marathon in October, raising money for the Cardiff and Vale Health Charity as a thank you to all the medical staff involved in his treatment.”

Ben Field, manager of Sport Pembrokeshire, congratulated all the winners, finalists and nominees, and said he was very grateful to the sponsors for their support.

“We received more nominations than ever before this year – 192 – which is a brilliant reflection on how sport is growing and thriving across the county,” he said.

Cllr Paul Miller, Cabinet Member for Sport, Leisure and Culture, added his congratulations and said: “The Sports Awards are a wonderful opportunity to recognise the amazing achievements of sportspeople across Pembrokeshire, and the very hard work that takes place behind the scenes. Club Organiser of the Year

Team Achievement of the Year

Junior (U16) Team Achievement of the Year