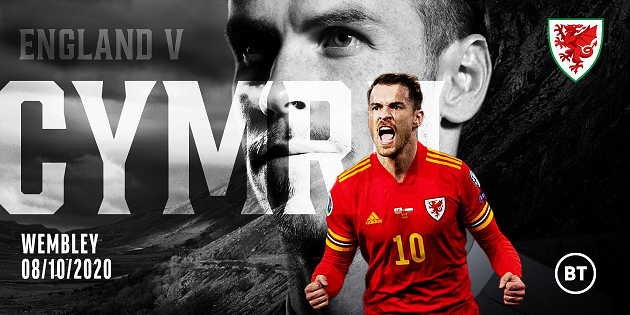 CYMRU will travel to Wembley Stadium on Thursday 8 October for a home nations international against England.

Ryan Giggs’ side will return to action this autumn for the first time in 10 months due to the COVID-19 pandemic, kicking off with the 2020/21 UEFA Nations League campaign. The match against England will be one of two additional international matches scheduled as triple headers in October and November. In keeping with current Government guidelines, this fixture is scheduled to be played behind-closed-doors.

Since their first encounter in 1879, England are Cymru’s second oldest opponents with 102 matches in total producing 14 wins, 21 draws and 67 defeats. Cymru’s last visit to Wembley Stadium was in 2011 for a UEFA EURO 2012 qualifier, with Ashley Cole scoring in a 1-0 defeat.

Ryan Giggs’ side will be using this match to prepare for the rescheduled EURO 2020 finals next summer where they hope to return to Wembley, one of the host stadiums, for the latter stages of the tournament.

Looking ahead to the autumn, Cymru are in Nations League Group B4 alongside Bulgaria, Finland and the Republic of Ireland with fixture dates as follows:

All fixtures are scheduled to be played behind-closed-doors for the foreseeable future.

The FAW will continue to adhere to relevant Government guidelines and supporters will be notified should arrangements change and tickets become available.