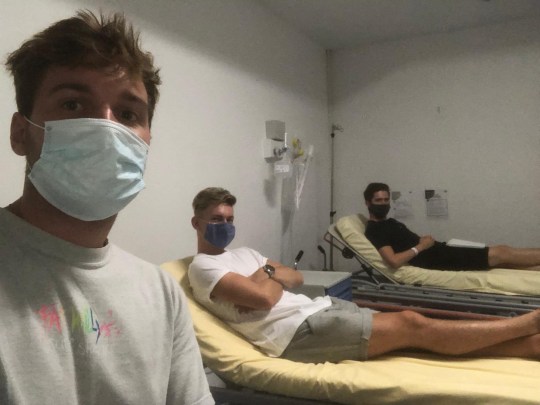 Left to right) Quinn, Rhys and Will

A PEMBROKESHIRE man who has been quarantined in Italy for more than a month after testing positive for coronavirus, is still no closer to being able to go home.

Rhys James of Pembroke Dock, who had been teaching English in Italy, has been hauled up in a secure isolation facility by Italian officials since he tested positive for the virus on August 17.

Speaking to The Herald, Rhys told us he originally went to Italy alone on July 5, starting in Milan and working across the north of the country.

On August 16, both Rhys and Quinn began to display symptoms of the virus and as the trio had been staying together, all three were tested for coronavirus.

All three men provided a positive swab test, despite Will still to this day not having any symptoms.

Rhys told us that they were initially all taken into hospital and told they would be able to return to their flats and isolate together. All men are travelling to isolation centres together, but must isolate seperately on their arrival

He claimed an hour later, guidance was different and another representative said all three would be taken to a hospital facility where they must isolate separately.

Hospital staff travelled to the men’s dwellings and packed up their belongings and sent them to the facility.

Rhys told us how all of their belongings were mixed up, which he says defeats the object of keeping them all separate.

The trio are currently on their third isolation facility, where they travel together, but then must isolate in separate rooms when they arrive.

Medical advice in the UK, currently says those that test positive for the virus have to quarantine for 10 days, then they are no longer considered infectious and they no longer need to isolate.

This science is backed by The World Health Organisation.

Current regulations in Italy stipulate that you must provide two separate negative Covid-19 swab tests at least 24 hours apart, before you can leave quarantine.

Despite none of the trio displaying any coronavirus symptoms since August 21, they continue to provide positive swab test results, a method that can detect dead cells for months after.

Originally they kept their spirits high by facetiming, but at some locations due to lack of WIFI that isn’t always possible. Typical meal provided by the facility

With no family to rely on or unable to order food from outside, the men are forced to rely on the hospitality of Italian quarantine centres for their daily meals.

With two out of the three men having food intolerance’s, this has caused them a great deal of discomfort.

Rhys told us that they have been in contact with The British Embassy, who have been able to assist them in their dietary needs and obtaining bigger portions.

The Foreign Office have cited to many media sources that they are in contact with the men, a claim Rhys disputes, saying no contact has been made with them from any representatives for the office.

Speaking on the quarantine, Rhys said: “I do understand why they are being so careful after the way they were hit with coronavirus at the beginning.

“But we are approaching nearly six weeks of isolation now and the only answer they keep giving us to keep us upheld here is that ‘it’s the science’.”

“We have had no update whatsoever, if we had an end date or somebody was doing something to help it would be fine. At the moment we are constantly stressed.” The men are hauled up indefinitely

Rhys told us how the measure inflicted on them seem as though prison would be a better option for them, he added “At least you can go outside into the yard, we can only open our door slightly to pick up our food and that’s it.”

Rhys told us how they are tested each Monday, all three men tested positive when they were tested on September 14.

They were last tested on Monday (Sept 21), they are still awaiting the results of the swabs.