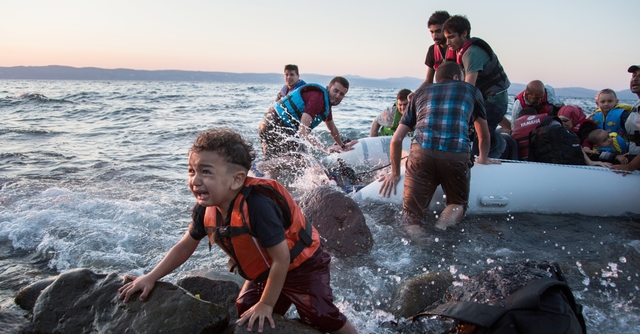 IN THE WEEK that the First Minister said that a military camp is not the correct place to house people who have escaped military conflict from other parts of the world, we cut through the jargon to explain the difference between asylum seekers, refugees and immigrants.

Following the decision to use Penally Camp near Tenby as a centre for up to 250 male asylum seekers there has been, amongst some of the protestors and commentators, some considerable confusion.

Every day, people around the world make the difficult decision to leave their countries in search of safety and better lives. Currently, there are 68.5 million men, women and children escaping war, persecution and political turbulence. These are refugees and asylum seekers.
There are others who are looking for jobs or an education—they are usually called migrants—and people who want to live permanently in another country—immigrants.

There’s been confusion and debate over the use of these terms to describe the plight of those on the move. Here’s a closer look at the distinct differences between a refugee, asylum seeker, immigrant, and migrant.

Who is a refugee?

A refugee is someone who has been forced to flee his or her home because of war, violence or persecution, often without warning. They are unable to return home unless and until conditions in their native lands are safe for them again.

An official entity such as a government or the United Nations Refugee Agency determines whether a person seeking international protection meets the definition of a refugee, based on well-founded fear.

Those who obtain refugee status are given protections under international laws and conventions and lifesaving support from aid agencies, including the International Rescue Committee

Who is an asylum seeker?

An asylum seeker is someone who is also seeking international protection from dangers in his or her home country, but whose claim for refugee status hasn’t been determined legally. Asylum seekers must apply for protection in the country of destination—meaning they must arrive at or cross a border in order to apply.

Then, they must be able to prove to authorities there that they meet the criteria to be covered by refugee protections. Not every asylum seeker will be recognised as a refugee.

Tens of thousands of children have fled extreme danger—war, murder, kidnapping, violence against women and forced recruitment by gangs.

UK law says that to stay in the UK as a refugee you must be unable to live safely in any part of your own country because you fear persecution there. If you’re stateless, your own country is the country you usually live in.

Who is an immigrant?

An immigrant is someone who makes a conscious decision to leave his or her home and move to a foreign country with the intention of settling there. Immigrants often go through a lengthy vetting process to immigrate to a new country. Many become lawful permanent residents and eventually citizens.

Immigrants research their destinations, explore employment opportunities, and study the language of the country where they plan to live. Most importantly, they are free to return home whenever they choose.

Who is a migrant?

A migrant is someone who is moving from place to place (within his or her country or across borders), usually for economic reasons such as seasonal work. Similar to immigrants, they were not forced to leave their native countries because of persecution or violence, but rather are seeking better opportunities.

What is an illegal immigrant?

Can illegal documents be used to enter the UK?

No, and persons doing so will be prosecuted unless they can show that they had no choice to use them to flee from danger.

Penally Camp will eventually house 250 male asylum seekers, these are men who have no choice but to flee from places like Iraq where they and their families face violence, threats and death for things like their religious beliefs and/or culture, some will also be coming from Iran where they face an uncertain future because of an extremely hardline government system which shows little, if any, mercy for those who do not conform to their strict religious laws. It is also highly likely, The Herald understands, that some of the asylum seekers have previously worked with, or are connected to those who have worked with, the UK and her allies during the War on Terror.

The 250 asylum seekers at Penally Camp will remain there until they get processed by The Home Office, at that point they will either become refugees and be allowed to remain for a period of time or they will be removed from the UK and returned to either their homeland or to the first place they entered into the EU under the Dublin Agreement (please note that this agreement expires on December 31 when the UK’s transition period ends and the UK leaves the EU).

The Herald has worked with www.rescue.org, an independent non governmental organisation to collate this information.