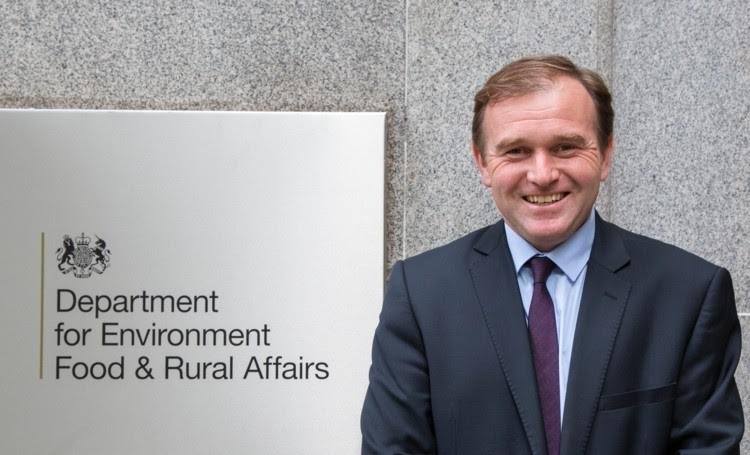 GEORGE EUSTICE has all the qualifications to be DEFRA Secretary of State in the Westminster Government.
He owns a pair of green wellingtons, corduroy trousers, a smart tweed jacket and a wax jacket.
He must be very good at his job. He’s been a Minister in DEFRA for most of the last six years.

Which makes his catastrophically ignorant performance on Sunday’s Andrew Marr programme all the more baffling.
After six years as a Government minister, four of which have come after the result of the 2016 Referendum and ten months of which have come after Boris Johnson ‘got Brexit done’, Mr Eustice appears to have little or no grasp of the realities of agricultural production and food processing.
His nonsensical remarks about sheep farming – which he has sought to clarity – have received a lot of attention.
Of equally worthy attention is how George Eustice regards the interaction between markets.
In Eustice World ™, tariffs will have no effect on the UK’s dairy industry because tariffs will also be applied to EU goods coming into the UK. Which would be an interesting take if in the last reported year the UK didn’t operate a surplus of dairy trade with the EU. In short, EU countries buy more of ours than we do of theirs.
No doubt the gap in exports will be taken up by exporting blue cheese to the notoriously lactose-intolerant population of Japan.

As an illustration of the Eustice Doctrine the DEFRA Secretary claimed that if producers like Arla wanted to continue to trade in the UK, they would have to relocate their production of Lurpak to the UK.
Arla explained in a subsequent tweet, doubtless to George Eustice’s amazement after only six years in DEFRA, Lurpak is subject to legal origin protections. Those mean that Arla can only produce Lurpak® in Denmark with Danish milk. It can’t be produced in the UK.
Arla helpfully added: “Don’t panic, whatever happens with Brexit, we’re sure we’ll be able to find a way to keep Lurpak coming into the UK.”
Dairy production was only a small part of George Eustice’s monumental achievements during his interview.
He went on to anger sheep farmers with a crass assertion so wrong-headed that even his subsequent attempted gloss on his words rubbed salt into their wounds.

FEELING THE HEAT OVER SHEEP MEAT

Andrew Marr asked George Eustice about the effect on sheep farmers. In a no-deal Brexit, red meat exporters face tariff barriers to trade with their largest export market. Over 40% of sheep meat is exported to the EU and that accounts for 90% of all UK sheepmeat exports. The largest market for British sheep meat in the EU is France, which takes around half of all exports.
In the event of a no-deal Brexit, the tariffs on lamb exports would make UK production uncompetitive in the EU market. Worse, the prospect of a trade deal with New Zealand raises the dual prospect of imports carving UK farmersout of their home markets.
Mr Eustice blithely asserted that UK sheep farmers would face only short term price drops and farmers who farmed sheep and cattle together could diversify into beef as imports from Ireland and the EU would fall due to increased tariffs affecting imports to the UK.
He subsequently clarified: “In my comments on the Andrew Marr Show, I did not say that all sheep farmers should diversify into beef. I said that if tariffs were applied then some mixed beef and sheep enterprises might choose to diversify more into beef because Irish beef would become subject to tariffs, creating new opportunities for British producers.”
That is not what Mr Eustice said. He said mixed cattle and sheep farms could diversify.
Mr Eustice’s suggestion would only have force if he thought most sheep farmers farmed cattle. Otherwise, his answer on sheep tariffs would make no sense in context.
On the latter point, farming organisations expressed dismay and bemusement at Mr Eustice’s ignorance.

Farmers should prepare for IHT changes