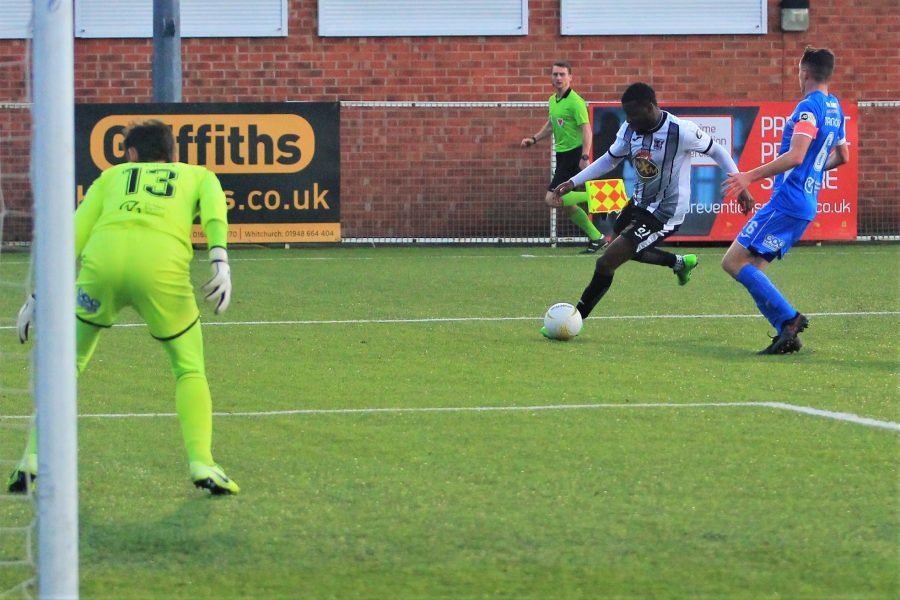 THE BLUEBIRDS fell to defeat in North Wales as three second-half goals from Cefn Druids saw off the visitors’ challenge.

After a bright opening, the match tightened up, with neither team able to take control of the ball.

Such half chances as were created during the opening period fell to the Druids.

Edge, for the home team, got the best chance early on. He won the ball back just outside the Bluebirds box but fired his chance high and wide.

Shortly after though, Haverfordwest created a very good chance as a ball over the top saw forward Mark Jones in on goal by Druids keeper and skipper Michael Jones produced a fantastic reaction save down low to deny him, and the follow up was blasted over by Marcus Griffiths after some frantic defending by Druids.

Druids then took the lead as Arsan crossed from the left for Cody Ruberto to finish to put the home side ahead.

Shortly after, Gajda kept the Bluebirds in the game as he got down to stop an Edge strike from point-blank range.

Gajda was called upon again as Darlington fired a volley towards goal from the edge of the box, but it was straight at the Haverfordwest stopper.

The Druids continued to apply pressure as soon as the second half began.

Alex Darlington had the first chance of the second half as he raced through on goal, but as he was one-on-one with Gajda he dragged his shot wide. Druids then doubled their lead, Gajda made a smart stop from an Azimale header but the same man poked in the rebound.

Azimale almost made it 3 to the home side but his strike from close range was well-saved by Gajda.

The Bluebirds continued to try and break down the home side.

Marcus Griffiths chased down a ball over the top, but his shot was smothered well by the Druids keeper, Michael Jones, denying the Bluebirds a way back into the game.

Then on 70 minutes, Druids hit a third.

Darlington found himself in a great position on the side of the box; however, instead of shooting, he found Edge in a better position with a delightful dinked cross. Edge fired past Wojciech Gajda to put the Druids 3-0 up with only twenty minutes to play.

The game was opening up at this point and only minutes later Haverfordwest sparked a glimmer of hope of a comeback after a mix up at the back allowed Jack Wilson to sneak in and cleverly lob the ball over Jones into the back of the net.

Haverfordwest now pressed forward for another and had a solid spell of possession, pinning the Druids back.

Minutes before the final whistle, Druids won a free-kick on the edge of the box.

Jonny Taylor, who had been on the pitch for only a minute or so, saw Niall Flint running into space. He played a clever quick free-kick, putting Flint through on goal while the Haverfordwest defence was caught napping.

Flint found the bottom corner to make it 4-1 and seal a deserved three points for the Premier’s bottom team.

The win sees the Druids move off the bottom of the table to only 1 point behind both Aberystwyth and Newtown.