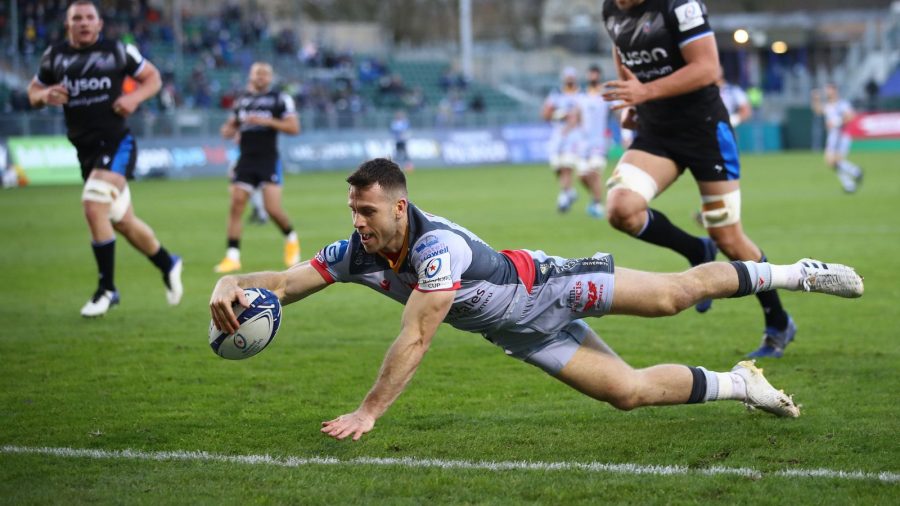 Heineken European Champions League
Bath Rugby 19 – Scarlets 23
IN A high-intensity game at The Rec, Scarlets dug deep to claim a thrilling Champions Cup victory over Bath Rugby.
Throughout a tense Pool A encounter, there was little between the two sides with Scarlets scoring a try in each half through scrum-halves Gareth Davies – on his 200th appearance – and Kieran Hardy.
Both teams had their chances to win but in the end, the spoils and the famous old ragdoll headed to West Wales.
Bath got on the board first with Ben Spencer striking home shot from the kicking tee.
While Bath applied early pressure, the Scarlets broke the shackles in spectacular fashion.
Leigh Halfpenny broke the defensive line to offload to Scarlets skipper Steff Evans. The winger broke through the cover defence to link with scrum-half Gareth Davies on the inside line.
The Wales scrum-half still had work to do but jinked past the final defender to cross near the posts.
Halfpenny added the extras, and shortly afterwards he missed a long-range effort to put the Scarlets further ahead.
The Scarlets lost Wales’ international forwards Jake Ball and Samson Lee to head injury assessments. Morgan Jones and Javan Sebastian replaced the duo.
It took 18 minutes of continuous pressure and knocking on the door of the Scarlets’ try-line before the hosts retook the lead.
A lovely piece of interplay began from No. 8, Zach Mercer. The ball was smartly shipped in contact before Sam Underhill found Ruaridh McConnochie, who dotted down in the corner. Spencer missed the conversion.
Bath then earned a scrum penalty after several warnings to the Scarlets’ front row. Spencer slotted home the three points to give Bath a four-point lead.
On 32 minutes the Welsh region got to within a point of Bath Rugby with a Halfpenny penalty. Just three minutes later, Spencer re-established the four-point gap as the hosts were awarded a penalty, which the nine converted with ease.
14-10 down at the break, the Scarlets would’ve been disappointed at the length of time they spent on the back foot and getting sucked into a physical confrontation with the rugged home eight.
It was only six minutes into the second period when the hosts were pinged for offside, allowing. Halfpenny to strike his penalty through the uprights from close range.
Bath piled the pressure on Scarlets with a lot of possession and territory, but they were unable to make that pressure pay off until the 53rd minute.
The hosts got their reward through Will Stuart, who crashed over to score in his first appearance of the season for the Blue, Black and White.
Josh Macleod replaced Jac Morgan, who enjoyed another outstanding game, and made an immediate impact with a turnover, while the experience of Jon Davies also proved crucial off the bench.
Scarlets kept plugging away and saw their hard work rewarded on 64 minutes.
Dan Jones combined with Rob Evans, who produced a sublime off-load to put Hardy away under the posts for a score converted by Halfpenny.
With one point in it, both sides had chances.
Hardy just failed to find Evans on his outside with the line beckoning, while Bath’s route-one approach came against a brick-wall defence.
A Halfpenny penalty gave the Scarlets a four-point cushion going into the final minutes, but Bath stole the kick-off before pounding away at the visitors’ line.
In the 78th minute, Bath crossed the whitewash, only to have the ball held up over the line following a crunching effort from Leigh Halfpenny to deny the home team a score.
Still 23-19.
But a try would be enough for the hosts to take the game.
As the clock struck red, Bath continued to pile on the pressure with continuous and relentless forward phases. As Spencer stretched his arm out towards the line, Morgan Jones steamed into the tackle.
It was the last play of the game.
With hearts in their mouths, Scarlets players waited for the TMO’s decision and reacted joyfully when the TMO ruled out the last gasp effort.
Glenn Delaney lauded the incredible never-say-die defensive effort that saw the Scarlets hang on for an outstanding 23-19 Heineken Champions Cup win over Bath at The Rec.
“That match had something for everyone didn’t it?” said a relieved Delaney afterwards.
“We had a chance to score just before those final minutes and then the commitment and effort at the end were massive. We were under so much pressure. That was about character. For me, it was epitomised by Gareth Davies.
“The boys wanted to play for him on his 200th and it was really special the way they finished it off to get the job done for him.”
Reflecting on the tense end to the game, Glenn Delaney said: “Those final minutes were all about commitment and heart. There were bits about the defence in the first half I wasn’t so happy with, I was frustrated we weren’t as aggressive as we would have liked, but that character comes through in the big moments. These are big-game players. We are learning as a group what it is like to be in this contest and that was a big European game for us.
“It is a big step forward, we will enjoy it and get ready for Toulon next week.”
Delaney added: “In the second half I thought we moved the ball a little wider on the edge. We never go that going in the first half and we were pretty harsh on ourselves at half-time. That try in the middle of the field, Rob Evans’s pass to put Kieran away was outstanding. That is the game we wanted to play. We wanted to move Bath around.
“We knew we couldn’t go at Bath square-on because they are big and physical and are good players. We had to move them around, we saw a bit of the Scarlets way coming out and the DNA of the club, the boys are happy to be taking the ragdoll home.”
Related Topics:
Up Next

Bluebirds shot down by Druids

Can you help the police with a Kilgetty burglary investigation?