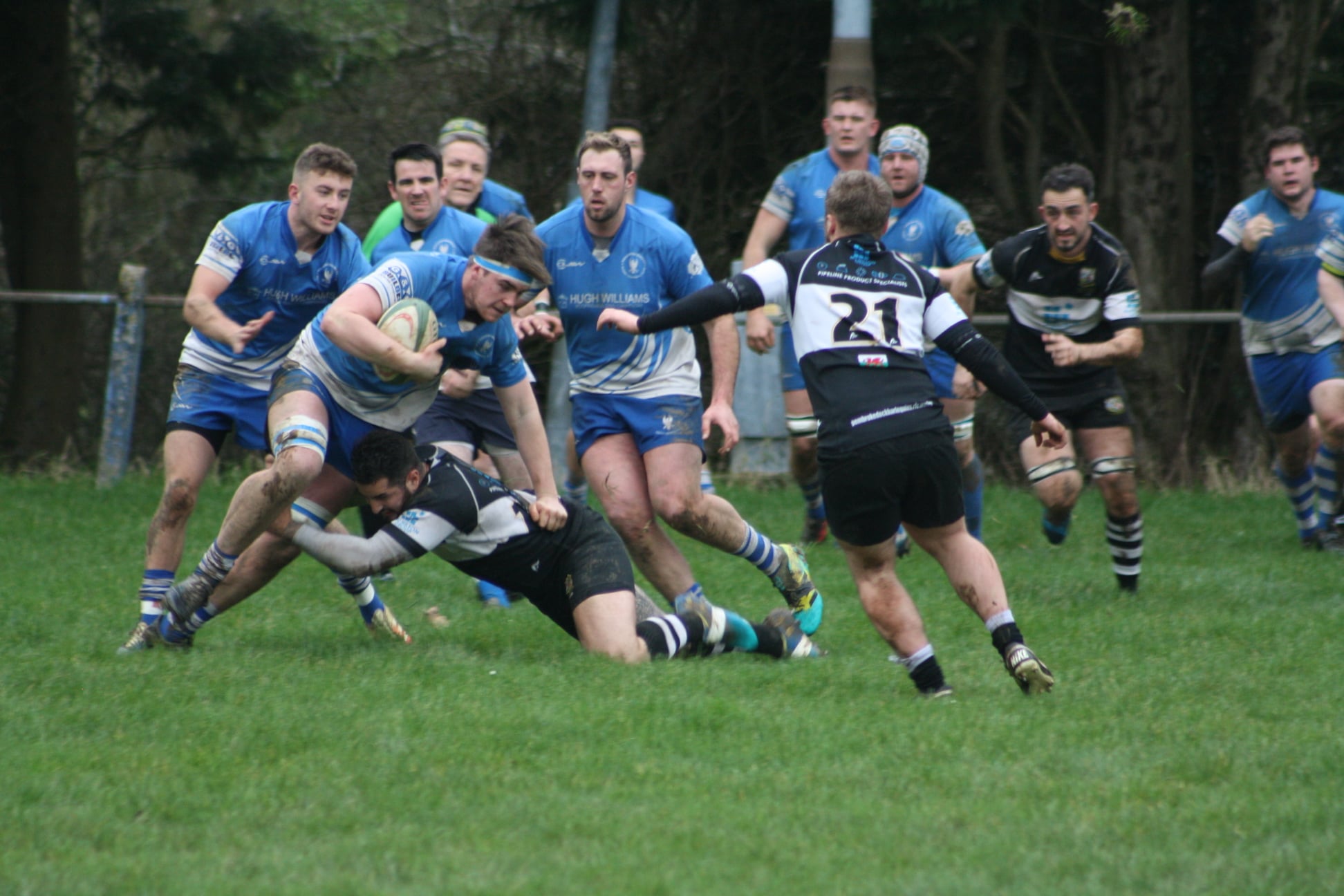 HAVERFORDWEST maintained their 100% record in League 3 West A on Saturday (Jan 15) but they were made to work for their 17-11 win by a determined Pembroke Dock Quins side.

It was a pulsating encounter and the teams will do it again in the near future with their Pembs KO Cup quarter final at Bierspool still to be played.

The Quins kicked off on a very still day without an ounce of wind anywhere and went straight on the attack and forced a penalty after just 5 minutes.

Up stepped Outside Half Euan MacDonald and he made no mistake and put the Quins 0-3 in front.

From there on the Quins were in the ascendancy, and it seemed it was only penalties that was giving the Blues respite.

Euan MacDonald tried his luck from a long range penalty but unfortunately for the Quins it just went wide of the upright.

The Blues started to hit back in the last ten minutes of the half and they were camped inside the Quins’ 5-yard line.

The Quins gave away a penalty try, and with only one minute of the half remaining that seemed to be that.

As the match went into added time, the Quins chased the ball down well and forced a Blues lineout 10 yards from their own line.

The Quins had clearly not read the script, and pinched the ball and went straight at the Blues line.

After holding on to possession well they finally recycled left and outflanked the Blues defence with a try for Full Back Sam (Rasher) James who dived over in the corner.

Euan MacDonald missed the conversion but the Quins, against the odds, went in at the break 7-8 in front.

The Quins recently have not had the best of starts after the break, but this time it was different. They were soon in the Blues’ half, attacking with some fine driving runs and some accurate kicking from the Half Backs.

They caught the Blues holding on, and up stepped Euan MacDonald to stretch the lead to 7-11.

The question now was could the Quins keep this intensity up and what were the Blues going to do about it?

We soon had the answer as the Quins were penalised and the Blues kicked to the corner. They won the Lineout and Prop Terry Lovell crashed over for an unconverted try to put his side in front at 12-11.

Now it was the Quins’ turn to answer some questions and they duly did, as once again they were camped in the Blues half. A drop Goal attempt from Scrum Half Jonathan Rogers went narrowly wide as the Quins desperately tried to regain the lead.

The Quins Scrum was struggling as the game was entering the final few minutes, which resulted in penalties which relieved the pressure for the home side.

Right on time Right Winger Jack Blockwell scored in the corner for another unconverted try. Could the Quins do what they did at the end of the first half? The answer was no but it was not for lack of trying.

The Quins can take a lot of Pride from this match, having lost No8 and Captain Harry Owen to a head injury, and without the ball carrying of Flanker Hywel Baker, which was a big loss to them.

The win moves the Blues up to second in the table and they are now the only unbeaten side in the division and they also have two games in hand on leaders St Clears.

On Saturday, January 22, Haverfordwest are in action in a preliminary round of the WRU Bowl competition as they take on Tylorstown.

The sides are next in league action on Saturday, January 29, when the Blues travel to Llanybydder while the Quins host Tregaron.