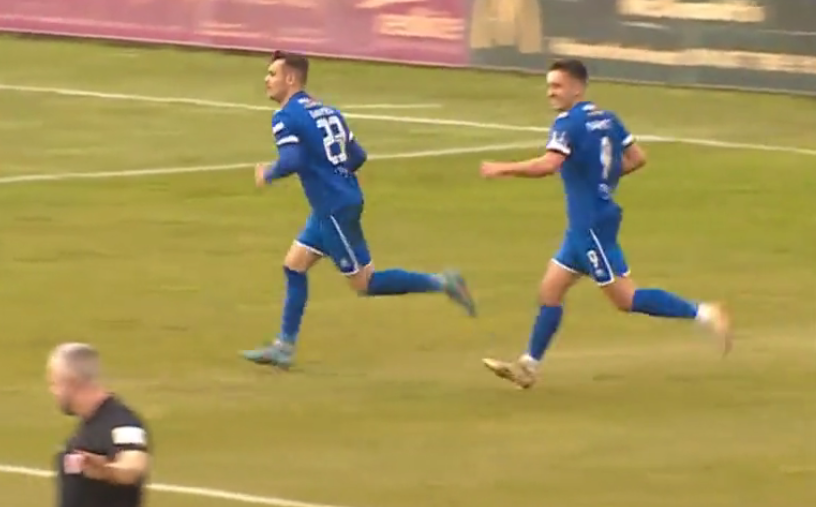 JORDAN Davies scored twice as Haverfordwest County beat Barry Town United 2-0 at the Ogi Bridge Meadow yesterday, a result which guarantees there will be JD Cymru Premier football in Pembrokeshire next season.

The on-loan forward gave the Bluebirds the lead after 19 minutes with a well-taken finish, before striking again just before the hour mark to give County a priceless three points.

Nicky Hayen’s side performed excellently throughout, and the margin of victory could have been even wider. However, the hosts did have goalkeeper Lee Idzi to thank for saving Kayne McLaggon’s second-half penalty to maintain the clean sheet.

The result is enough to lift the Bluebirds up to seventh, and top of the Play-Off Conference, after Cardiff Metropolitan lost 2-0 at Connah’s Quay Nomads.

Manager Hayen made two changes to the team that beat Cefn Druids 6-1 last Saturday, with Kurtis Rees and Ricky Watts coming in for the suspended Alaric Jones and Kyle Patten, who failed a fitness test before kick-off.

It was the visitors who had the first opportunity of the game, with McLaggon seeing his shot from inside the area well saved by the alert Idzi.

This was as close as the Dragons would come to scoring in the first-half, as County went on to control the tempo and create the better chances.

Jordan Davies, who was heavily involved throughout, played a teasing ball across the face of goal but couldn’t pick out a teammate, before Kieran Lewis’ first time effort went wide after Ben Fawcett had done well to keep the ball alive.

County were nearly presented with a gift when Jordan Davies’ ball into the area was fumbled by Mike Lewis, however, despite being nearby, Lewis couldn’t react in time as the ball went wide.

The Bluebirds were ahead just minutes later though, when Fawcett’s ball down the right touchline put Jordan Davies into space, and he advanced into the area before turning Evan Press inside out and firing past Lewis to send the home crowd wild.

It was very nearly 2-0 not long after when Jordan Davies’ curling effort from the left side went narrowly wide of the right post.

Hayen’s side were flowing with confidence at this point, as Henry Jones’ shot from inside the area took a deflection before being pushed behind by Lewis.

There were two further opportunities for the Bluebirds to double their advantage before half-time, with Fawcett’s cross picking out an unmarked Jordan Davies, who was unable to get the desired connection on his shot, before Fawcett’s header was blocked on the goal line.

Marcus Day went close with a shot from distance which flew just over the crossbar 10 minutes before half-time, as County headed into the changing rooms with a deserved lead.

Keen to find the second goal early in the second-half to take full control of the contest, the Bluebirds started quickly with Jazz Richards’ ball into the area nearly finding Fawcett, as Lewis came out to gather.

Moments later, though, they did find the second goal when Lewis’ pass upfield played Fawcett into acres of space, and his pinpoint cross into the area picked out Jordan Davies who beat Mikey George to the ball to sweep home and give County some breathing space.

It looked as though the lead was going to be halved when the visitors were awarded a penalty shortly after the hour mark, as Kurtis Rees was adjudged to have fouled Clayton Green inside the area. However, Idzi was equal to McLaggon’s spot kick, as he got down low to his left to push the ball away and keep the scoreline at 2-0.

The Dragons striker had another opportunity to bring his side back into the game not long after, but Jazz did brilliantly to get back and block his shot from inside the area.

Rhys Kavanagh sent a shot inches wide of the left post as Gavin Chesterfield’s side continued to push forward, but the Bluebirds defence battled hard to ensure they maintained a clean sheet.

Substitute Jack Wilson sent a shot just wide in the closing stages as County looked to finish with a flourish. However, the game was to finish in unfortunate circumstances as substitute Alhagi Touray Sisay had to be carried off the field on a stretcher after sustaining an injury to his collar bone.

The game, understandably, rather petered out after this, but it was Hayen’s side who took all three points having turned in an excellent display when it was needed the most.

The Bluebirds are next in action on Monday (April 18), when we travel to Deeside Stadium to take on Connah’s Quay Nomads, before returning home to face Cardiff Metropolitan in our final game of the season on April 23 at the Ogi Bridge Meadow.