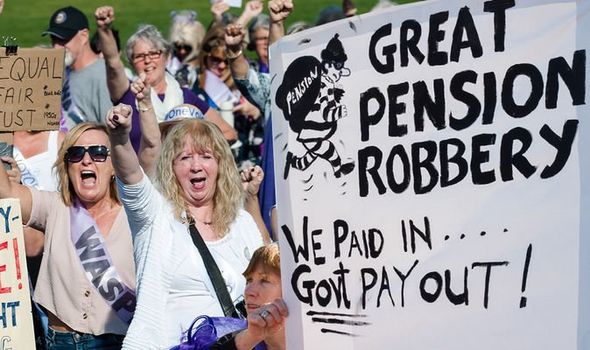 PENSIONS Minister Guy Opperman, like Simon Hart, Secretary of State for Wales have said that they have no plans to meet with WASPI campaigners.

In the latest twist for these women, Labour MP Dr Rupa Huq questioned the Government on when the last meeting between a minister and the women of WASPI was held, and when the Government next intends to schedule one.

Guy Opperman, minister for pensions, stated there had been a meeting between a minister and representatives of WASPI.

However, he acknowledged this had occurred years ago on June 29, 2016.

Jackie Gilderdale said that “The Ombudsman has been clear that the Department could be pro-active on compensation”.

“All we are asking is that Ministers meet with us to discuss a fair, fast compensation package now before more women die waiting for justice. We have lost over 220,000 women during this campaign including members of the local 1950s WASPI Women of Wales.

“The MPs refusal is ignorant. They need to remember they’re paid from the public purse, to represent their constituents”.

Rupa Huq MP, who posed the original question in Parliament, has described the Government’s response as “shocking”.

She has called for the Government to take further action on the matter for women affected.

Ms Huq added: “The DWP has already been found guilty by the Ombudsman of maladministration”.

On Saturday some 1950s women joined over 115,000 people in London at the TUC rally, demanding justice now.

Simon Hart MP/Secretary of State responded recently to one of his 1950s WASPI Women of Wales constituents who asked for his help. His opening paragraph in his response was as follows:-

“Thank you for your recent email regarding pensions and the cost of living. I’m sorry to hear that you are struggling with the increase in heating and electricity bills; I appreciate the stress it is causing in households across the country”.

Local 1950s WASPI Women of Wales Organiser, Jackie Gilderdale said: “It’s all very well that Simon Hart responded, but what does he intend to do to help the 1950s women and others during an economic crises caused by his Party, and the fat cats who profit through Tory Policies? His responses continue to be cut, copy and pasted from websites, rather than from himself”.

With lower state benefits and higher tax revenues from employment, the increase in state pension age from 65 to 66 boosted the public finances by £4.9 billion per year, equivalent to around a quarter of 1% of national income, or 5% of annual government spending on state pensions. The benefit to the exchequer is the key counterpart to the reductions in household incomes caused by the reform.

Jackie said that “just to make it clear, the national insurance fund has a surplus of approximately £30 billion and that surplus has been generated by the women who have paid national insurance. All we ask is that the 1950s women are given what they are entitled too – after all they’ve paid into the system for decades. The state pension should be seen as a right, but the Government have changed the terms and conditions of that right without consulting the 3.6 million women affected! 12 months ago the Government and DWP were found guilty of maladministration and now we await the findings of stages 2 and 3, so these women can be rightfully compensated”.