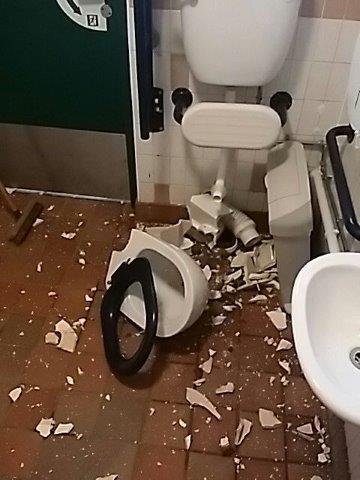 PEMBROKESHIRE COUNTY COUNCIL has vowed to crack down on acts of vandalism in the county and is asking the public to help.

It comes after damage was caused to toilet facilities in Marine Road Broad Haven and the multi-storey Car Park in Haverfordwest between December 7-10.

The damage caused to the cubicle in Haverfordwest was so severe it has been temporarily shut, however two cubicles can still be used while the required maintenance is carried out.

Fortunately, Danfo, maintenance contractors of public conveniences in Pembrokeshire, were able to re-open the facility in Broad Haven swiftly.

On both occasions the toilets were smashed to pieces.

“It is clear that whoever is doing this is doing it for the sole purpose of causing damage for damage sake. It is mindboggling why someone would want to do that.

“The damage is such that I assume they are using something like a sledgehammer to do it and if anyone has seen or heard anything, I’d urge them to get in touch with us so we can work with the Police to follow it up.

“It is mindless, stupid and causes a risk to the public.”

Damage caused to public conveniences in Pembrokeshire amounts to thousands of pounds a year and the Authority has been forced to board up the facility at Gelliswick in Milford Haven due to a spate of recent attacks.

Danfo regularly have to clean up facilities across Pembrokeshire after vandals kick doors off hinges, rip toilet paper holders from fixings, fill toilet pans with pebbles and mud while used toilet paper is often strewn over walls.

“These people are causing a risk to the health of the public and costing us money that we can ill afford to spend at a time when budgets are stretched,” added Cllr Tomos.

“We cannot and will not allow them to get away with it.”

Milford Haven: Fire at storeroom next to Sir Charles Whetham