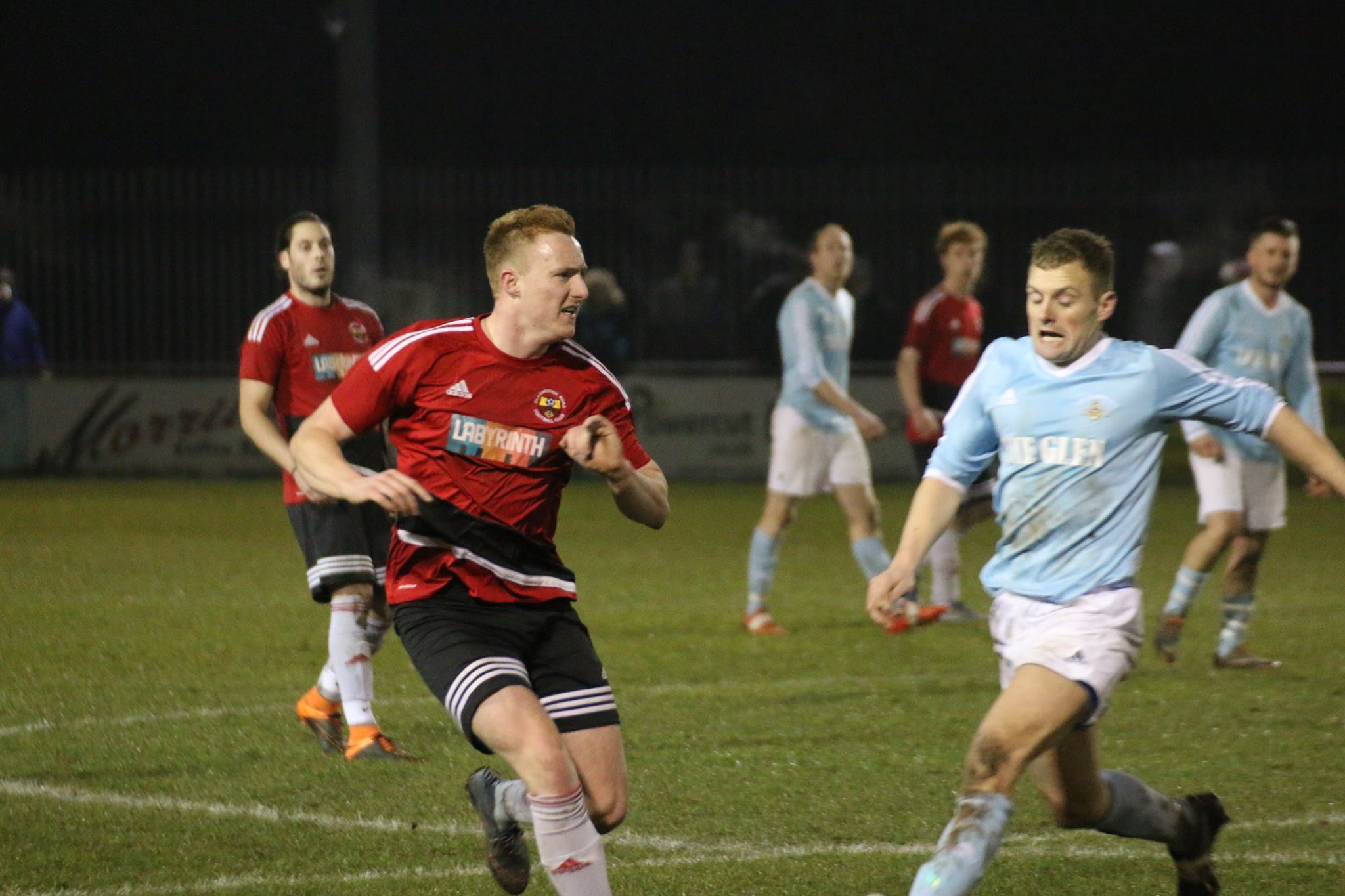 CLARBESTON Road are the first team into the Senior Cup final after they knocked out holders Merlins Bridge on Wednesday night (Feb 21), thanks to a last minute deflected strike from Ieuan Cooke.

The Bridge, who had a man sent off with twenty minutes to go, had thought they forced the game into extra time when Chris Ormond headed in but it wasn’t to be as Cooke’s winner sent the Clarby players and fans into delirium.

The game was a repeat of last season’s Final which the Wizards won and both sides were clearly determined to reach the Final once more.

It was a quiet first half with Merlins Bridge shading the possession and having the better of the chances.

Will Haworth came close for the Wizards but his shot was pushed wide by Clarby keeper Lee Scott.

Adam Hawkins also tried his luck but his shot was tame and was easily saved by Scott.

On the half hour mark, Clarby’s Jason Griffiths tried a long shot but Bridge keeper Gary Thomas was equal to it.

A minute later, Griffiths flashed a ball across the face of goal but nobody was able to get on the end of it. Joey George then sent an inviting cross to the back post for Hawkins but as the Clarby players appealed for offside, he could only send his effort into the side netting.

Matthew D’Ivry then played Hawkins in once more but he dragged his shot well wide of the posts.

Then on the stroke of half time Clarby got the all-important breakthrough as Tom Reubens beat the defender before sending a shot towards goal which was deflected in by the Wizards’ Richard Hughes.

There was still time for Merlins Bridge to come back and from the kick off a long ball was missed by the Clarby defence allowing Will Haworth in but his shot was saved at the near post.

The half time whistle went with Clarby leading by a goal to nil but the game was still up for grabs.

The Wizards started well in the second half and Luke Hayward saw his effort pushed wide by Scott and from the resulting corner, Hawkins saw his volleyed effort also saved.

Mike Turpin then sent a cross into the box which had to be tipped over by Bridge keeper Thomas with players lurking.

Bridge top scorer Nathan Greene was introduced to the action and he almost made an immediate impact when he turned and shot towards goal but Scott got down well to save it.

Then came a few moments of madness from Bridge defender Richard Hughes as he was booked and then brought down Clarby’s Matthew Davies and after waving play on, referee Sean O’Connor waited for play to end before producing a second yellow card for Hughes.

Despite being down to ten men the Wizards still had chances and Hawkins saw a shot saved before Greene saw an effort cannon back off the crossbar.

With three minutes to go the Wizards were awarded a free kick which D’Ivry delivered and Chris Ormond rose highest to head the ball into the net despite the best efforts of the Clarby keeper to save it.

That got their tails up and moments later Greene headed over from a corner as the Bridge pushed for a winner.

Then, deep into injury time, a ball into the box fell to Ieuan Cooke and his effort looked as if it would be saved by Thomas but a Bridge defender stuck an unfortunate leg out and the ball bounced off him and into the net. Nathan Greene heads over from a corner

That sent the Clarby players and coaches wild and they held on to reach the final for the second year in a row.

They will now play the winners of the second semi-final between Carew and Hakin United which takes place next Wednesday (Feb 28).

Speaking after the match, Clarbeston Road coach Matthew Ellis said: “Everyone gave 110% as we knew we would have a tough night ahead of us. They started at a high pace and were on top until we changed formation slightly and this slowly got us into the game.

“The goal came at the perfect time and gave us a massive boost going into half time knowing they would have to break us down and would leave gaps at the back. Tom Reubens has been excellent this season and showed his power and pace to create the goal.

“The sending off didn’t really affect the game as we kept the same shape and allowed them to have the ball in their half as we tried to conserve energy for the final onslaught.

“It was a big blow when they scored when they did, I gave away the free kick which led to the goal so when Cookie got the goal in injury time I was ecstatic as none of us wanted extra time.

“It is a massive achievement for the team and the whole club as it is so well run behind the scenes. This is a reward for both us and them.

“Two senior cup finals in two seasons is outstanding, let’s hope this season we will be the winning side!”