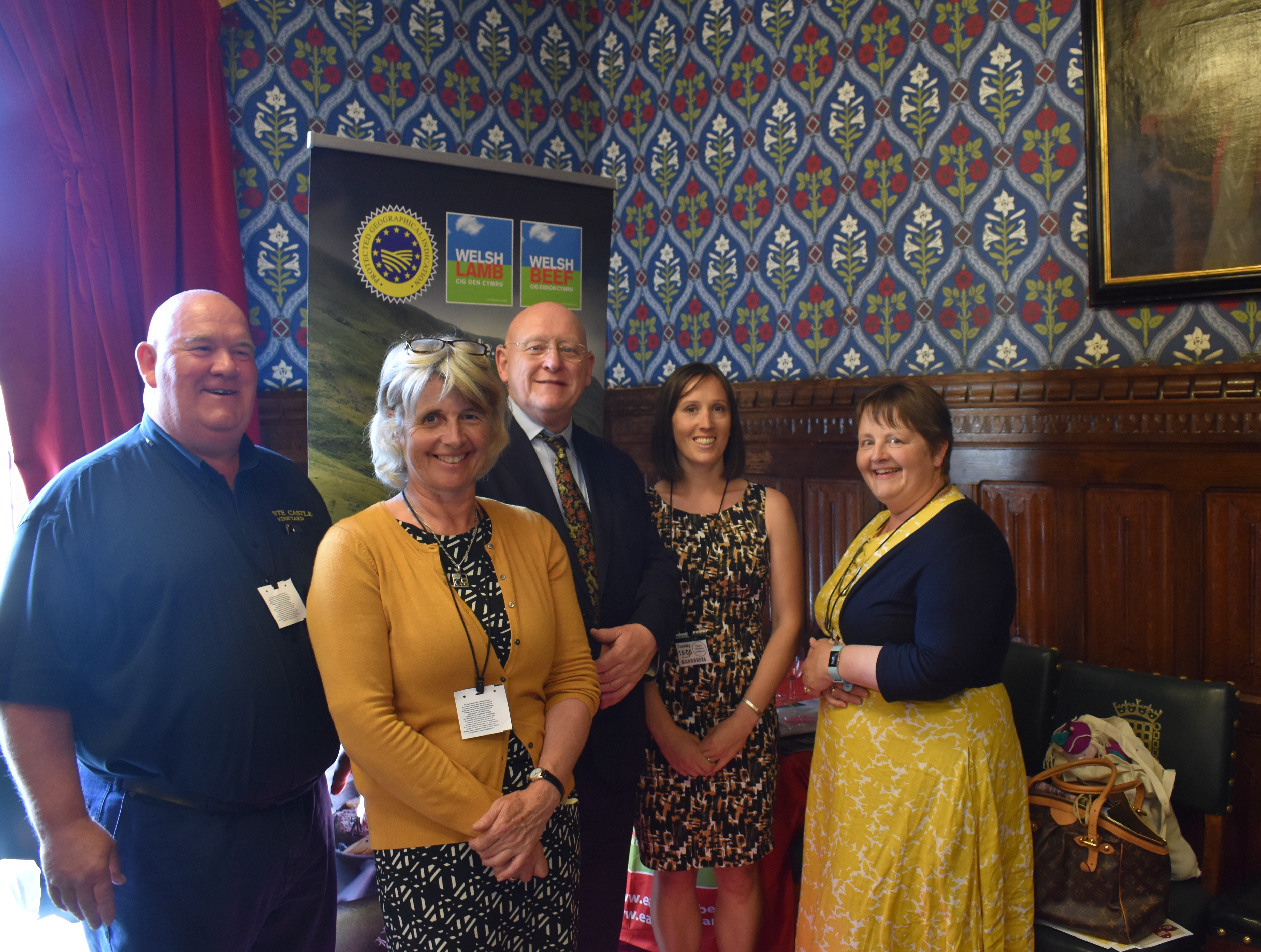 REPRESENTATIVES of some of the UK’s most iconic foods met with MPs and Peers at Westminster on Tuesday​ (May 15) with the future of Protected Food Names top of the agenda.

Politicians crowded into Westminster’s Jubilee Room for a showcase of foods from among 86 products which currently enjoy designation under the European Protected Food Names scheme. The event, organised by the UK Protected Food Name Association (UKPFN) was an opportunity to discuss how the brands bring £4.8 billion in export income to the UK each year, and how the scheme could be maintained after Brexit.

Hybu Cig Cymru – Meat Promotion Wales (HCC) had a major presence at the event, with samples of PGI (Protected Geographical Indication) Welsh Lamb and Beef proving popular among the politicians.

“PGI designation has been the cornerstone of efforts to grow new markets for Welsh Lamb and Welsh Beef, at home and abroad,” said HCC Chief Executive Gwyn Howells. “It is recognised as a mark of high quality and traceability among the food industry globally.

“We naturally take a close interest in how these brands, currently protected under EU law, will be maintained after Brexit,” he added. “As part of the UKPFN Association, we have been engaging actively with the Westminster and Welsh Governments.”

Gwyn Howells explained​:​ “It is possible for products outside the EU – such as Colombian Coffee – to have this designation. However the issue is part of the Brexit negotiations, and nothing is yet guaranteed.

“It’s vital that a solution is found to enable lamb and beef from Wales to maintain their current status alongside iconic products such as Champagne and Parma Ham,” he argued.

“PGI Welsh Lamb and Beef is a billion pound industry employing thousands on farms and in the supply chain. Anything less than a seamless transition to an equivalent scheme which is recognised worldwide could risk the export success that Welsh red meat has enjoyed over the past decade.”

The event was sponsored by Arfon MP Hywel Williams, and featured over thirty products from England, Scotland, Northern Ireland, and a large delegation from Wales including Anglesey Sea Salt and Welsh Wine.

Lesley Griffiths, Welsh Government Cabinet Secretary for Energy Planning and Rural Affairs said “Protected food names are internationally-recognised badges of authenticity and originality. Wales produces world-leading food and drink of the best quality. Our Protected Food Name basket is growing, which gives recognition to the dedication of our producers to quality and ensures that their products are protected under EU law.

“The EU scheme has registered products from as far as China, Cambodia and Turkey, which demonstrates that when UK leaves the EU there is a strong precedent set towards negotiating our continued part in this scheme, the Welsh Government will work hard to ensure this. Wales has deep experience in food and agriculture, and the substantial number of protected and designated products is a result of our ability to combine traditional farming methods with innovation and technology​.”​

HCC launches vision for the future