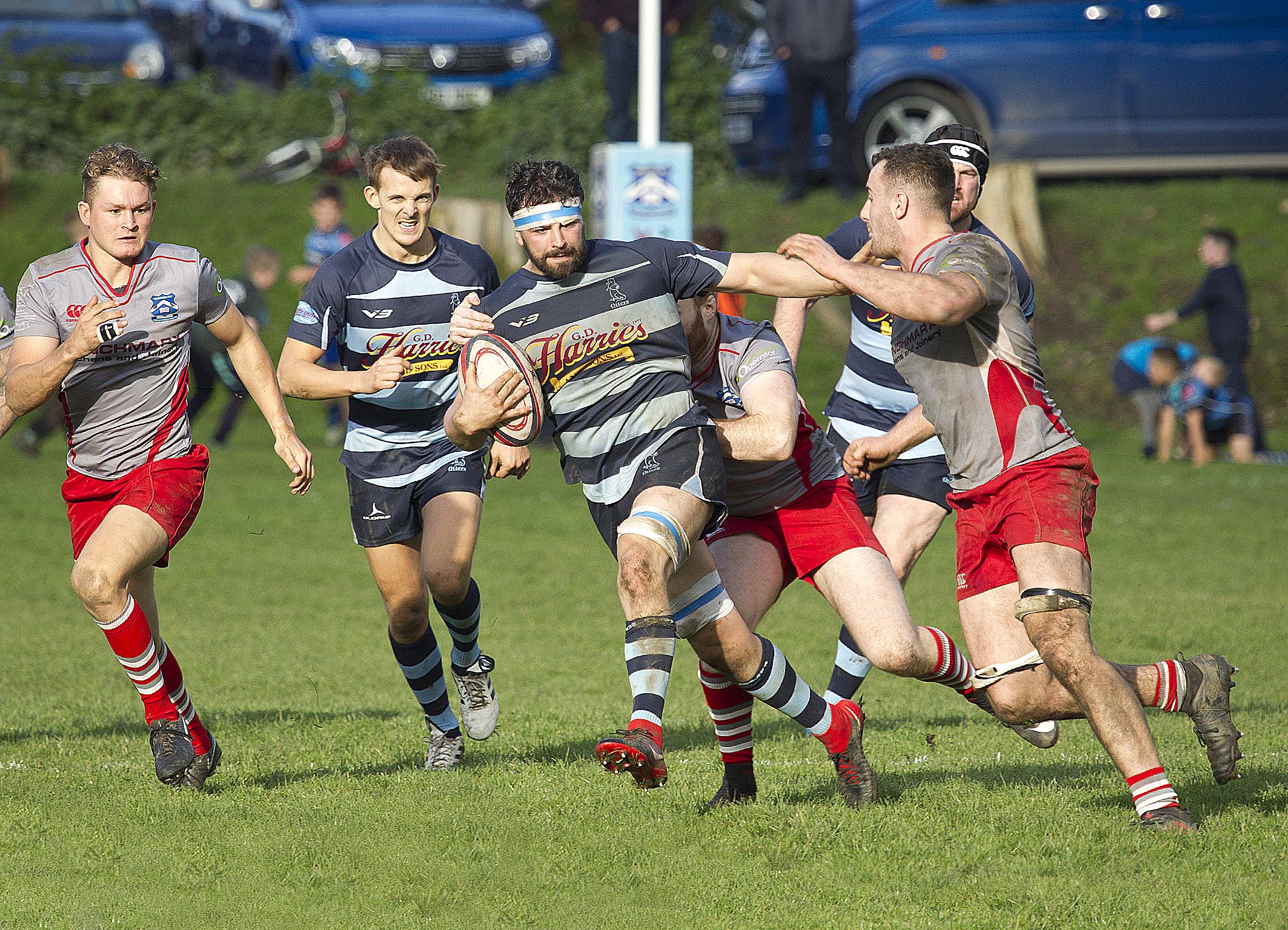 NARBERTH travelled to Trebanos on Saturday (Oct 20) with once again a few enforced changes to the team due to injuries and unavailability.

Trebanos are having a very good season with a great defensive record and the Otters knew they were in for a very tough match on a ground where they had lost the previous season.

For the first ten minutes there was very little between the teams with the side in possession looking to create opportunities and then spread the ball wide but good defence from both sides resulted in a stalemate.

Eventually Narberth was guilty of a high tackle and home winger Matthew Edwards kicked the penalty (3-0). Shortly afterwards Trebanos infringed at a ruck and Nick Gale, playing at centre, evened things up with a nicely struck penalty from about 45 metres out (3-3).

Five minutes later Narberth had a scrum on the Trebanos 22 metre line. No.8 Richie Rees picked up the ball and drove forward. The ball was recycled and fed to centre Jack Price who broke down the middle.

There were further charges towards the Trebanos line by the Otters two Props Bradley Davies and Tom Slater and then Richie Rees once again took the ball forward. He was tackled close to the try line and quick ball from the ensuing ruck saw Jack Price sprint through a gap in the home defence and pass to the supporting full back Johnny Morgan who scored near the posts. Nick Gale kicked the conversion (3-10). Narberth started to get on top at this stage of the game and had the greater share of possession. The forwards and backs were combining well but whether Narberth took the ball on in the forwards or spread the ball wide the Trebanos defence held firm with some strong tackling.

Then Narberth had a scrum near to the Trebanos try line and when the Otters drove forward Trebanos dropped the scrum and were penalised. Nick Gale kicked the penalty (3-13).

Shortly after the restart Narberth were penalised at a lineout and the home team kicked to the corner. The Otters defended well but had to concede a five metre scrum. From this the ball was moved quickly to the Trebanos No.12 who broke the first tackle and then fed his co-centre Tom Dew who scored near the posts. Matthew Edwards converted (10-13).

The remainder of the half saw Trebanos putting pressure on the visitors in their own half and it was the Otters turn to put in a determined defensive shift with some strong tackling being put in by forwards and backs alike. The Otters held out and the score remained 10-13 at half time.

Trebanos started the second half as they had finished the first and after five minutes a clever kick through behind the Narberth backs by the home fly half saw centre Tom Dew dive on the ball and score under the posts.

Winger Edwards converted to put Trebanos back in the lead 17-13. Narberth quickly got themselves back into the game and were pressing near the Trebanos try line. They were beginning to get the upper hand in the scrums with Bradley Davies, Dan Smith and Tom Slater outscrummaging their front row opponents. Eventually from a series of forward drives towards the home try line Narberth forced their way over with a well-deserved try from No.6 Andrew Cooke. Nick Gale converted (17-20).Shortly afterwards from another infringement at a scrum by the home team saw Nick Gale kicking a penalty to increase the lead (17-23).

Trebanos refused to give up and came back with a series of lineouts close to the visitors line but every attack was driven back by a dogged defence from the Narberth forwards. However from an infringement at a ruck Narberth were penalised and again Edwards kicked the goal (20-23).

Narberth then made several changes with Props Davies and Slater being replaced by Dan Jacobs and Tom Kaijaks, scrum half Rhys Lane being replaced by Lewys Gibby and Yannick Parker replacing the injured Nick Gale in the centre. More Narberth pressure in the scrum resulted in afurther penalty which Narberth kicked to the corner.

The ball was caught at the lineout by captain Alex Jenkins and Narberth drove towards the Trebanos line. Eventually the ball was released and Jack Price forced his way over the line. The conversion attempt failed (20-28).

Trebanos came back yet again and a further penalty by Edwards brought the score back to 23-28. That was the final score of the game and the Otters were relieved to come away with another away win.

On Saturday (Oct 27), they are home to Cardiff Metropolitan who are unbeaten and top of the Championship table. It should be an interesting encounter.

Vikings hit back to beat Pencoed

Pembroke up to third