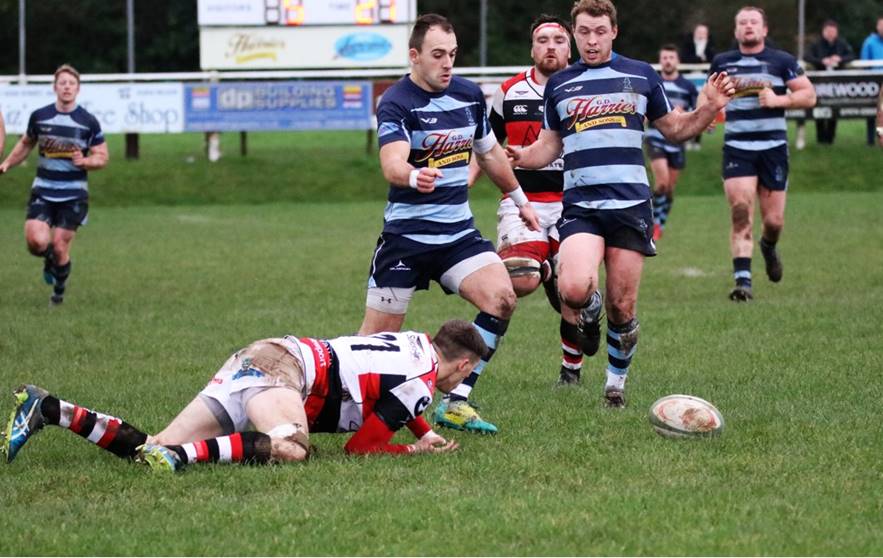 NARBERTH gave everything they had on Saturday (Jan 19), but it wasn’t enough to earn victory against Pontypool at the Lewis Lloyd Ground.

Pontypool, unbeaten in 49 games, arrived with an army of loyal supporters to add to a large crowd eager to witness the clash. They were not disappointed for the Otters had no intention of giving way to the league leaders.

The Otters kicked off and for the next few minutes attacked Pooler in their half and on the halfway line. A scrum was called and the ball was served and in seconds the ball came out on the tight head. Pooler winger Lloyd Lewis gathered the ball and seeing his way to the line clear, raced up the far touchline for him to score an unconverted try.

The Otters restarted and it seemed a kicking duel was likely until Pontypool put the ball in touch. From the Otters lineout the ball was moved  from left to right with hooker Rhodri Owens breaking forward, Pooler brought him down but the Otters rucked well, Ryan Lane fed the ball to Jonathan Rogers who repeated the previous weeks drop goal with ease, bringing the score to 3-5.

There was then another kicking duel with Pooler chasing every kick while the Otters played for safety and kicked into touch. Pooler then set up a rolling maul before releasing fly half Mathew Lewis to place the ball into touch on the Otters 22. Pooler continued to put the pressure on but the Otters stood up to it well. The visitors forced the Otters back into their 22, gaining a penalty at the breakdown and Mathew Lewis put the ball into touch on the 5 metre line by the clubhouse.

From the lineout they set up a rolling maul but the Otters pack were equal to the technique and thwarted Pooler and managed to get the ball to Jack Price who kicked down field before full back Geraint Walsh moved the ball to the opposite side of the field before the Otters closed him down.

Pooler were penalised for offside enabling Jonathan Rogers to kick into the Pooler 22. The Otters gaining the ball moved across from the stand side but the move broke down when the passed ball was dropped.

The Otters regained possession and Jack Price made a powerful break and although tackled he managed to forced his way through before slipping to the ground. At the ruck the Otters were again penalised.

Then on 27 minutes with Pooler in attack in the Otters half the ball broke loose and reacting quickly Nick Gale kicked the ball down field, the Pontypool winger was unable to control the ball enabling Nick to kick forward again and easily win the sprint to the touch down. He followed this with an excellent conversion to make it 10-5 to the Otters.

Pooler responded aggressively to finding themselves behind but the Otters defended with good organisation and equal aggression stopping every attempt to break through even at the scrum 10 metres from the Otters line, when Rhys Lane was able to put in a relieving kick into touch on his 22.

The Otters pack put pressure on Pooler enabling wing Will Lewis to kick ahead and break forward. He gathered the ball making many metres before being tackled.

Pooler were making much use of their heavier pack but a stout defence held them back. Close to half time Mathew Lewis kicked Pooler to the Otters corner. At the lineout a maul was formed but held back only for the Otters to be penalised and for Richard Rees to be sent to the sin bin.

The referee eventually blew for half time after playing six minutes injury time with the Otters 10-5 ahead.

The second half started with both full backs attempting a kicking duel before Ianto Griffiths put the ball into touch on halfway.

The difference between the two scrum halves beside age is that Lewys has a longer pass enabling Jonathan Rogers to position himself further back away from the Pooler back row. However, five minutes into the second half, Pooler levelled the score with an unconverted try by flanker Mikey Herbert who broke through the Otters defence to cross the line and touch down.

For the next 10 minutes Pooler stepped up their pressure in an aggressive manner with both defences putting in some brutal tackles. The Otters were awarded a penalty for Nick Gale to step up and successfully kick the Otters into a 3 point lead at 13-10. A few minutes later, the Otters were defending another forceful Pooler attack when on their 22, there was an unfortunate injury affecting flanker Steffan Phillips. His cries of agony were heard around the ground and play stopped for 10 minutes while he received attention. A huge round of applause occurred when Steffan rose and was able, with assistance, to walk off the field with his right arm supported.

A scrum restarted the game, Pooler were awarded a penalty with which Mathew Lewis levelled the score at 13-13.

This was followed a few minutes later with the Otters regaining the lead with another Nick Gale penalty.

The Otters continued their attempts to break through the Pooler defence and a diagonal break by Keiron Jones saw him tackled 5 metres from the try line. A successful ruck saw Jonathan Rogers throw a long pass which reached Nick Gale who raced towards the line before being pulled down, via the ruck the ball was moved quickly towards the clubhouse when Pooler were penalised for lying offside.

The Otters kicked to the corner at the lineout forming a maul but the possession was lost enabling Pooler to force their way downfield. On 76 minutes they were awarded a penalty, Mathew Lewis kicked to touch into the Otters 22.

At the lineout they formed a maul before quickly releasing the ball with Mathew Lewis managing to break the defensive wall and score an unconverted try. The score was now 16-18.

Unfortunately the Otters kick out on the half way line went directly into touch. Thus enabling Pooler to scrummage and retain the ball.

Otters defence coach Jon Dodd commented: “It was a very hard game, very physical. We probably gave Pontypool the hardest game of the season, we are disappointed we lost. Everything went to the game plan. There was more kicking and chasing than we normally do but that was because of the quality of Pontypool.

“Defensively we were very good but we spent long periods of time without the ball and it took its toll. We took our breakaway try very well but there were other chances we might have taken. We played excellently and for the spectator it was a good game to watch. The team from 1 to 15 put in a very good performance today. Nick Gale with his place kicking was excellent and kept us going. So with those thoughts in mind we can go forward in the remaining games and win them all.”

Wasps settle for a draw