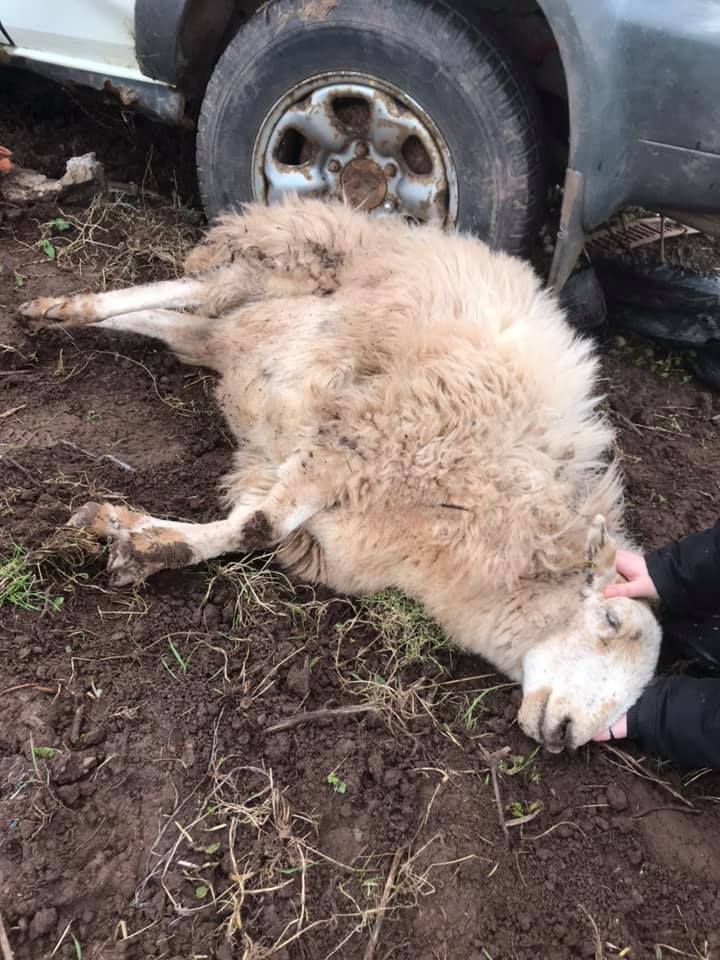 RESIDENTS in Pembroke Dock are expressing concerns about the welfare of animals in a nearby field after a sheep which was found to be in ill health by the member of the public had to be put down by a vet.

The animal was found at a field just off the B4322 (Pembroke Road) yesterday afternoon (Jan 27).

The locals who saw the animal in distress, describing it as seemingly ‘neglected’, tried to contact the RSCPA but received no help, which ultimately meant that a vet had to put the animal to sleep.

A Facebook post about the incident has been shared hundreds of times, with many local residents expressing their outrage at the fact animals were being kept in such conditions.

A Herald reporter visited the field this afternoon (Jan 28) and it is easy to see why locals are alarmed.

Immediately in front of the gate a wrecked vehicle, with debris strewn across the ground across the length of the field. Debris: All across the field (pic. Herald)

Wire, pieces of old wooden pallets, and litter can easily be identified from the gateway.

The field also lacks a lot of grass, with the majority of the ground covered in mud.

One local, who did not wish to be named, told us: “I saw the sheep  – initially thought it was dead, but I went into the field and took a closer look and it was moving so I stooped down to it.

“It started to have a seizure and was in a bad way – I couldn’t leave it like she was. Old vehicle: In front of the gateway (pic. Herald)

“We contacted the RSPCA but after 2 hours we had heard nothing and the weather was atrocious so I decided to try and make it comfortable by making a bed in the back of my van.”

The local continued: “A man turned up to ask what was wrong – I explained and he drove off, and then the owner came. He was identified to me afterwards as I had no clue who he was at the time.

“He asked what was wrong and I explained and he opened her mouth, pulled her legs and told me to take it home.

“At this stage I was unaware who this person was, so I called a vet as I couldn’t bear to see it suffer any more and the RSPCA hadn’t turned.

“The vet came to your home and put her to sleep in the back of my van.

“Nobody has contacted myself or my friend – I’m just being inundated with messages from the public telling me of lots of other occasions of neglect etc that authorities are well aware of but nothing is ever done.”

When contacted by The Herald about the concerns raised, a spokesperson told us: “We are aware of the number of expressions of concern relating to these animals.

“We can assure the public that appropriate steps are being taken to ensure the welfare of the animals during the ongoing investigation.”

An RSPCA spokesperson said: “RSPCA Cymru is very saddened to hear that this sheep was severely injured and to prevent further suffering was put to sleep. The animal welfare charity can confirm that it received a call in regards to this sheep, and passed this onto Animal Health, who have been leading on animal-matters in the area.

“Unfortunately, the RSPCA only has a very small number of inspectors – but we receive a call for help approximately every 30 seconds across England and Wales; and sometimes need to pass calls onto other agencies where they have appropriate statutory responsibility, or who have prior experience of a location.”