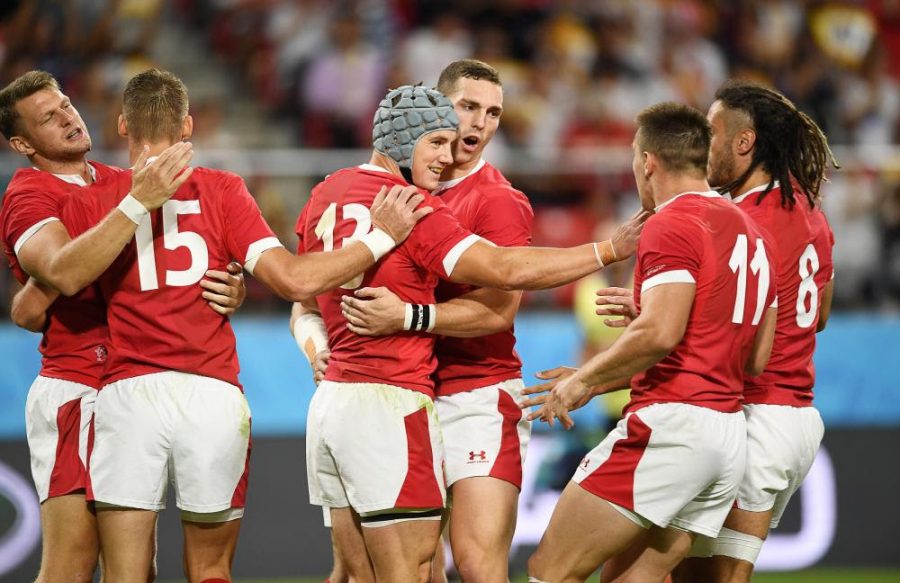 WALES booked their place in the quarter finals of the Rugby World Cup on Wednesday as they survived a scare from Fiji.

The Fijians led 10-0 early on and 17-14 in the second half but a try hat trick from Josh Adams helped them eventually seal the victory.

Fiji made a bright start but a loose pass gave Wales possession. However, James Davies was then guilty of being offside and Fiji opted for a scrum near the try line.

They worked it to the right for Josua Tuisova who forced his way over despite the attentions of three Wales players. Ben Volavola missed the conversion from wide on the right but Fiji led 5-0 after the opening five minutes.

Wales thought they had scored a minute later when Josh Navidi went over but the ball had been knocked on earlier in the move.

Fiji then broke through again and Frank Lomani touched the ball down, but after checking with the TMO the pass to him was judged forwards.

The referee stayed with the TMO to check for foul play and it was Ken Owens who was yellow carded for a tip tackle.

Fiji didn’t let the disallowed try get to them and they again worked it to the right for Kini Murimurivalu who rolled over before touching down. Volavola’s conversion from out wide again was just wide.

Tevita Cavubati was then yellow carded for a shoulder charge to the back temporarily making it 14 vs 14.

After 18 minutes Dan Biggar kicked across field to the left for Josh Adams who took the ball well before touching down. Biggar then added the conversion from out wide to make it 10-7 to Fiji.

With 26 minutes gone the ball was played to Adams again who dived over but the TMO adjudged that Adams’ foot had just gone into touch.

Fiji were defending well and had forced Wales back but Semi Kunatani was guilty of being offside and was given a yellow card after a series of Fiji indiscretions.

With half an hour gone Wales, after looking to bulldoze their way over, passed out left to Adams again who this time went over for the try. Biggar was successful with the conversion again to give Wales a 14-10 lead.

Shortly before half time Fiji thought they had scored a third try but Volavola’s pass to Viliame Mata was forward.

Half time came with Wales winning 14-10 but the game was still very much in the balance.

Fiji started the second half well and came close to the line but James Davies turned the ball over after seven minutes to ease the pressure.

Davies was then penalised for stopping a drive and after an accumulation of penalties, he was shown a yellow card.

Fiji kicked to touch and set up a maul but after it was brought down near the line, referee Jerome Garces marched under the posts to award a penalty try.

That put the Fijians 17-14 ahead and Wales then lost Dan Biggar to a head injury. He and Liam Williams both went for a high ball with Biggar coming off worse. Biggar picked himself up but was replaced by Rhys Patchell.

Patchell was straight into the action as he scored a long-range penalty to bring the scores level.

Jonathan Davies then made a great break for the line and made a superb offload to Adams who dived over to touch the ball down. The try was checked by the TMO but Adams’ hat trick was soon confirmed. Patchell’s conversion came back off the post and the score stayed at 22-17.

Davies then limped off and he was replaced by Owen Watkin.

Fiji were keen to show that they were not out of the game and came forward again but gave away possession.

With ten minutes to go, Gareth Davies offloaded to Liam Williams who dived down near the posts to secure a bonus point for Wales. Patchell added the extras to put the men in red 29-17 ahead.

That try all but sealed the win for Wales and when the clock ticked past 80 minutes, they kicked into touch to bring the game to a close.