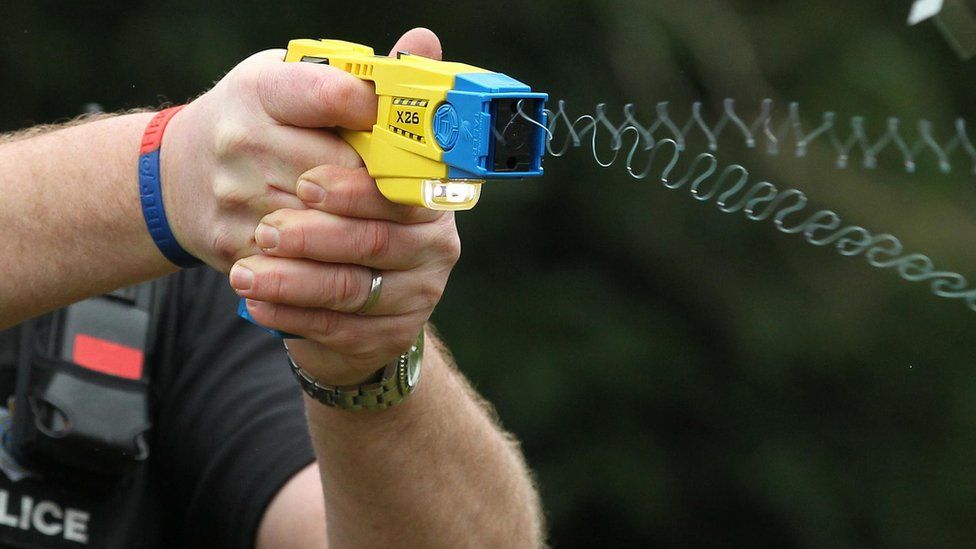 Dyfed Powys Police have released the video following the jailing of the hostage for 27 months.

Officers used chainsaws to cut their way through a door before throwing stun grenades into a room at the house in Fishguard, Pembrokeshire, in November last year.

Police then charged through the doors firing Tasers to subdue hostage-taker Shane Thomas, 23, and his father.

Thomas was wanted by police and had gone on the run after attacking two customers in a pub, Swansea Crown Court heard.

He was later tracked to his father’s home – and barricaded himself inside with four teenagers.

One of the youths raised the alarm by messaging a friend on Snapchat saying he was being ‘held against his will and frightened’.

A court heard Thomas was in an ‘alcohol and drug haze’ when he blocked the front door with a fridge, settee, and cooker.

Thomas said he had drunk 15 cans of lager and erected barricades to protect himself because he was ‘scared’ of police. Prosecutor Dean Pulling said that when officers arrived Thomas shouted threats through the door and a ‘siege’ developed.

Mr Pulling said the grenades were thrown as ‘distraction devices’ before Thomas was Tasered, sprayed with pepper spray and restrained.

Swansea Crown Court heard both Thomas and his father were arrested at the house in Fishguard, Pembrokeshire.

Mr Pulling said the siege had cost police around £31,000 because it involved 30 officers and a force helicopter.

Jon Tarrant, defending, said dad-to-be Thomas had been in a ‘alcohol and drug haze’ after being kicked out of home last year but now wanted to grow up.

Judge, Recorder John Philpotts, told Thomas he was ‘hell bent on trouble’ and jailed him for 27 months.