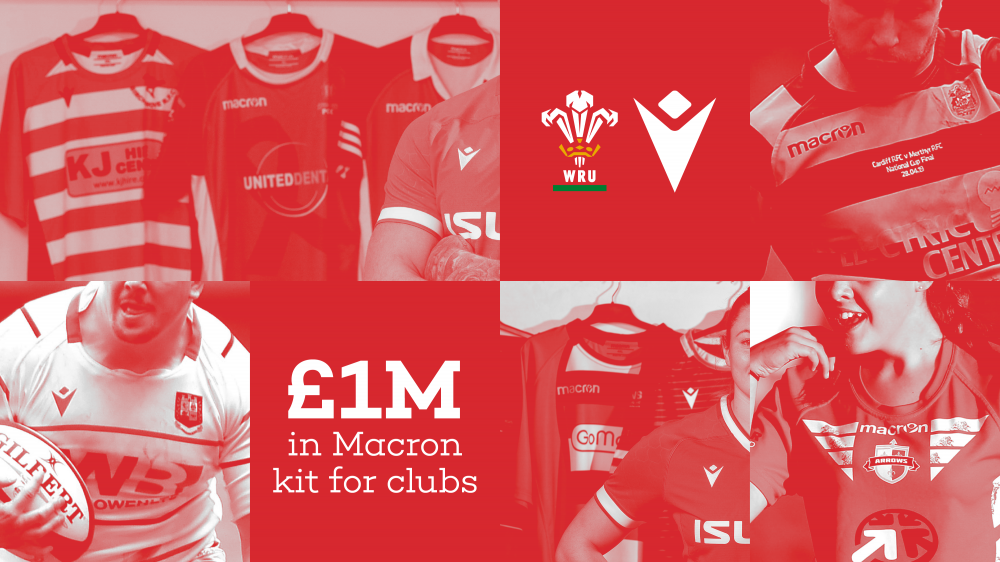 All WRU clubs, along with Female Hubs, mixed ability teams and Wales Deaf have been offered the chance to claim at least one set of free kit for next season as part of the Welsh Rugby Union’s kit sponsorship with Macron.

Macron became the WRU’s official kit supplier in 2020, providing Wales’ national and age grade teams with playing and training gear. And a key part of the innovative partnership will see Macron invest £6 million over six years in free kit for the community game.

Clubs have been invited to sign up to the offer and claim between £1500 and £6300 in free kit vouchers for next season depending on the teams they run. The vouchers, once allocated, can be used at local Macron Stores, who will provide support in helping clubs to select, design and order kit.

From a community club perspective, there is an allocation for senior men’s 1st XV teams which can be re-distributed by other club teams such as 2nd XVs, vets or junior teams, if, for example clubs have already produced senior men’s 1st XV kit for next season.

Clubs can also claim free Macron kit vouchers to purchase a set of kit for their youth and senior women’s teams. This allocation must be used for those specific teams.

Female Hubs and a number of inclusive teams throughout Wales such as mixed ability teams have been offered the chance to claim a set of free Macron kit, and Macron will also kit out the Wales Deaf national teams.

WRU Community Director Geraint John said, “We are delighted to be able to offer the community game such a substantial amount of free Macron kit which will be especially appreciated at this time. The vouchers will enable all our clubs, Female Hubs and inclusive teams to reduce kit costs or re-allocate valuable sponsorship monies. Macron is already a proud kit supplier to many community clubs in Wales, and their eagerness to embrace this key area of the game will no doubt consolidate that relationship.”

Clubs, Female Hubs and inclusive teams have been contacted and asked to sign up to the offer by Friday 5 March, indicating the teams they wish to claim kit vouchers for.

Wales duo return to boost Scarlets side for Benetton clash