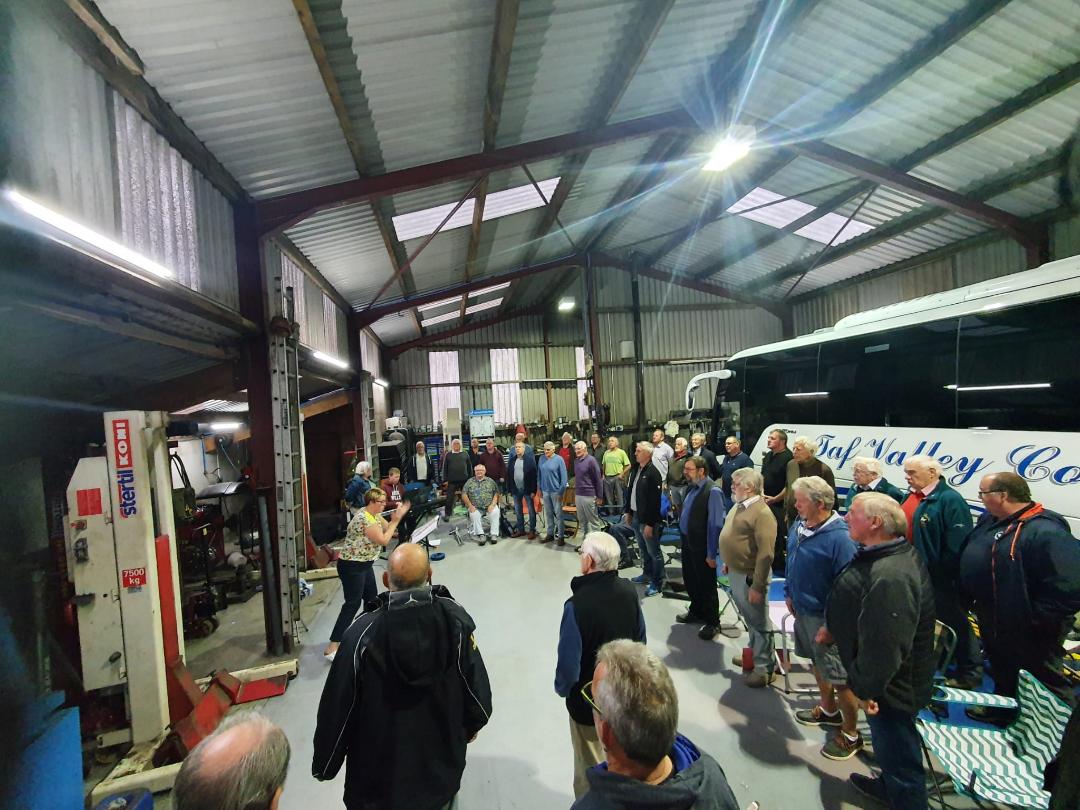 Whitland Male Choir are returning to the stage for the first time since St David’s Day 2020 to star in Narberth & Whitland Rotary, Grand Charity Concert when they perform with Britain’s Got Talent Stars Richard and Adam at the Follies Theatre, Folly Farm on Saturday 9th October this year.

One of the oldest choirs in the country, Whitland Male Choir should have been celebrating its 125th Anniversary in 2020. The pandemic meant this was not possible and as a result 19 Choir events have been cancelled in the last 18 months and they are delighted to have been invited to take part in this gala event.

It has been a difficult time for all of us and choirs have been no exception. From March of last year until the end of May 2021, they were unable to get together to practice and Choir spokesman David Thomas said that “However, for 12 months the Choir kept together with weekly online practices. It was not without its technical challenges for all of us, but it meant we maintained contact with each other and kept the camaraderie”.

“Our first get-togethers were socially distanced in the open air, firstly in the lovely garden of Choir Librarian Phil Garrod, then in the stand at Whitland Rugby Club and also in the grounds of Ysgol Dyffryn Tȃf before we were able to meet in the garage of Bysiau Cwm Tȃf, thanks to Clive Edwards. And we soon discovered the acoustics in the garage are superb”!

The Choir has raised many thousands of pounds in recent years. Their members are drawn from a wide area, embracing Whitland, Clunderwen, Llanboidy, Maenclochog, Haverfordwest, Narberth, St Clears and the surrounding areas. The Choir has competed in many competitions and has been successful at the National Eisteddfod and Gwyl Fawr Aberteifi (Cardigan eisteddfod).

The Choir are delighted that their first concert back is on home territory and they look to once again travelling further afield. In the past the choir has travelled abroad giving concerts at Tramore and Killarney in Ireland; Pipriac, St Gregoire and Rennes in Brittany.  They have also performed at the Royal Albert Hall, London; St David’s Hall, Cardiff and the M.E.N. Manchester not forgetting trips abroad to Vienna, Holland and the Cork Festival in Ireland.  The Choir has also enjoyed singing with other choirs over the years.

Mrs Hefina Jones was appointed Musical Director in 2018 after being accompanist for almost 20 years. Hefina is originally from Capel Iwan near Newcastle Emlyn and currently lives in Llangynin, St Clears.  Hefina works at Ysgol Dyffryn Taf, Whitland and is also a part time piano teacher.  She enjoys working with children to give them the opportunity to enjoy and develop their musical skills.  She obtained the A.L.C.M in 1993 and has accompanied various artists and choirs over the years.  She has conducted numerous singing festivals in the area, and enjoys singing in her spare time.

The Accompanist is Owain Williams, he is originally from Wiston, near Haverfordwest.  He attended Ysgol Glan Cleddau and Ysgol y Preseli, then went on to study professional music at the University of Wales, Trinity Saint David in Carmarthen, graduating in 2013. Having worked at Nant y Ffin Hotel for many years, Owain is a familiar face to many and currently works as the County Organiser for Pembrokeshire YFC.  As well as accompanying Whitland Male Choir, Owain accompanies Bechgyn Jemeima, the Landsker Singers and Criw Harmoni.

Deputy Accompanist is Heather Jenkin Heather lives in Whitland and is a Foundation Phase teacher and music co-ordinator at Ysgol Caer Elen, Haverfordwest. Heather is also accompanist for Corlan, a mixed choir based in Llanboidy, a member of Parti’r Gromlech and is one of the organists at Tabernacle Chapel, Whitland.

Tickets for the concert, which are sure to be in great demand are now on sale and can be bought online at www.nwrotary.co.uk and also for cash at local outlets, Dales Music Shop, Tenby; Rock ‘n Rolla Boutique, Narberth and The Creative Cafe, High Street, Haverfordwest. They are also available from Chorister Huw Jones of Whitland Male Choir.