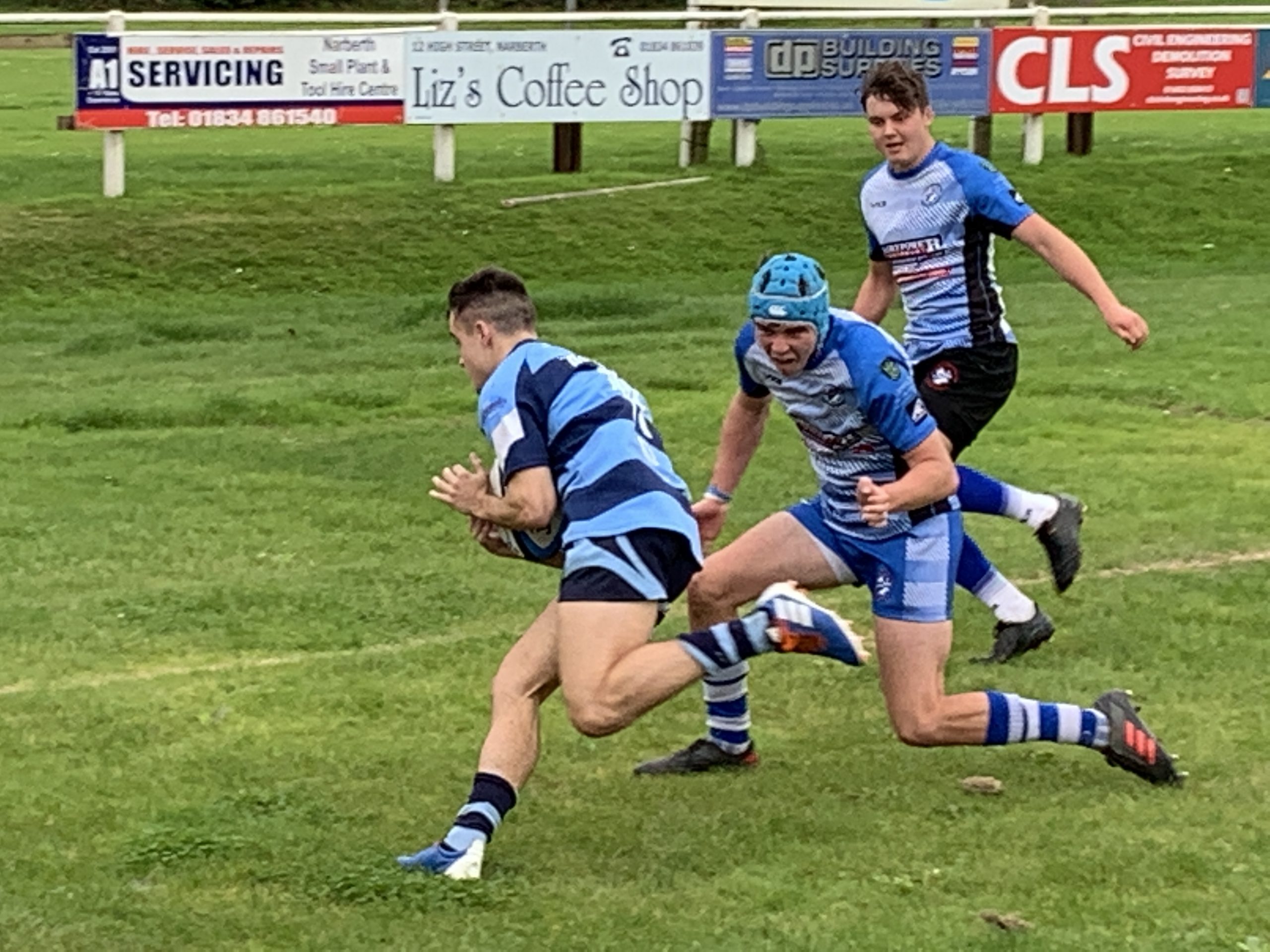 THE Narberth RFC first team remained unbeaten during the WRU Cup and are now waiting for confirmation of the second round play-offs dates and venues. The strength in depth of the OTTERS is due to the commitment of the Coaches and back room staff for all teams not just the first.

The Club believes in nurturing the game and the players from the young sides under 5’s to under 16’s with just as much pride and commitment as that shown for the 1st team.

The results speak for themselves. One of the rising stars, George Macdonald, is only 18 years of age and playing for the 1sts has provided two magnificent performances as scrum half echoing the exploits of his father Chris MacDonald a former player and stalwart for Narberth RFC.

Members will fondly remember Chris – he was educated at Dyffryn Taf School, Whitland where he captained the schools senior side and was

Captain of Narberth RFC Under 15’s. On 27.04.1989 in the Youth Cup Final at Pembroke Chris scored 2 tries from centre position resulting in Narberth 14 Pembroke Dock Quins 10. The RFC club statistician Ken Mathias keeps records of all the teams and he provided the following insight.

He was also a member of the Narberth Youth Team that beat Cardigan 19-13 in the Final of the Youth Cup at Whitland following a replay. Chris was judged to be Player of the Tournament in the 1990 Narberth 7’s Squad that won the Pembs County 7’s tournament at Pembroke Dock Quins.

He made his debut in October 1990 in the Narberth First team in the Heineken League and during that season played 15 league games all of them at centre where he partnered either Peter Nicholas or Gerwyn Reynolds scoring his first league try in November of that year.

In November 1991 he played his first game at scrum half for the first team in the Heineken league and that turned out to be his favourite position in a long and illustrious career. During the season 1994 – 95 Chris joined Swansea RFC for a season and a half before returning to Narberth and he was subsequently elected Narberth First team captain in the season 1998-99. At the turn of the millennium in one season he scored 12 tries in league games.

His prowess in the sport led Chris in 2004-05 to join Llanelli in the Premiership and he scored the winning try in the last few minutes to win the Konica Minolta Cup Final 25 – 24 against Pontypridd. He stayed with them for two seasons before returning to Narberth. He also played for the Scarlets and represented the British Police on numerous occasions including several tours abroad

In April 2007 Chris played his last league game for Narberth and was awarded Man of the Match on merit. In total for the OTTERS Chris Macdonald played in 252 league games scoring 82 league tries and a further 10 in Welsh Cup games. Quite a record and his son George shows enough talent to match or surpass his dad’s achievements. Time will tell.

In the meantime, at the start of the 2021-2022 season, other youngsters in the age group 16-18 are also showing promise in the Narberth RFC Youth Team. In the final game of September they beat Fishguard 20-10 in a pacy match played in good weather conditions on a superb OTTERS pitch. Defensively, many of the young bloods, some only just turned 16, were up against a heftier side of whom many of the opposition players were that bit older and more mature in their physique.

Youth Coach Rob Nicholas commented: “Our young Narberth youth team faced an older and much bigger Fishguard opposition on Saturday. From the outset Fishguard used their large forwards, running hard off the scrum half. After weathering this early onslaught with brave and aggressive tackling the home side started taking the game to the opposition.

Excellent handling and interplay saw them go into half time leading 10-0 with two well taken tries from Owen Llewellyn.

The second half mirrored the first with the visitors continuing to use their massive pack and the home team repulsing them time after time. Narberth continued to move the ball well and scored another excellent try through Yori Morgan.

Fishguard had a late rally but Narberth ran out fully deserved winners 20 points to 10. Outstanding for the young Otters were Yori Morgan, Brad Cramb, Owen Llewellyn, Tom Monk. The three coaches were unanimous in their choice of man of the match Harri Harries.

Not to be outdone the under 9’s age group were out practicing in the last Sunday of September. Ken Morgan went along to see the youngsters training routine involving tackle bags under the supervision of their coaches Andy Cotter, Dave Monan, Tomas Rees and Dylan Hughes.

At the end of the training session they then had a 40 minute session of two 20 minute halves playing against a Whitland team kitted out in their familiar Green and White strip from the neighbouring town.

There was some fast running from both sides but at this level the main aim of the coaches from both sides is to develop speed, awareness of space and passing the ball. The youngsters had a great time and thoroughly enjoyed playing on the 1st Teams pitch.

Seagulls miss out on a draw after missed conversion