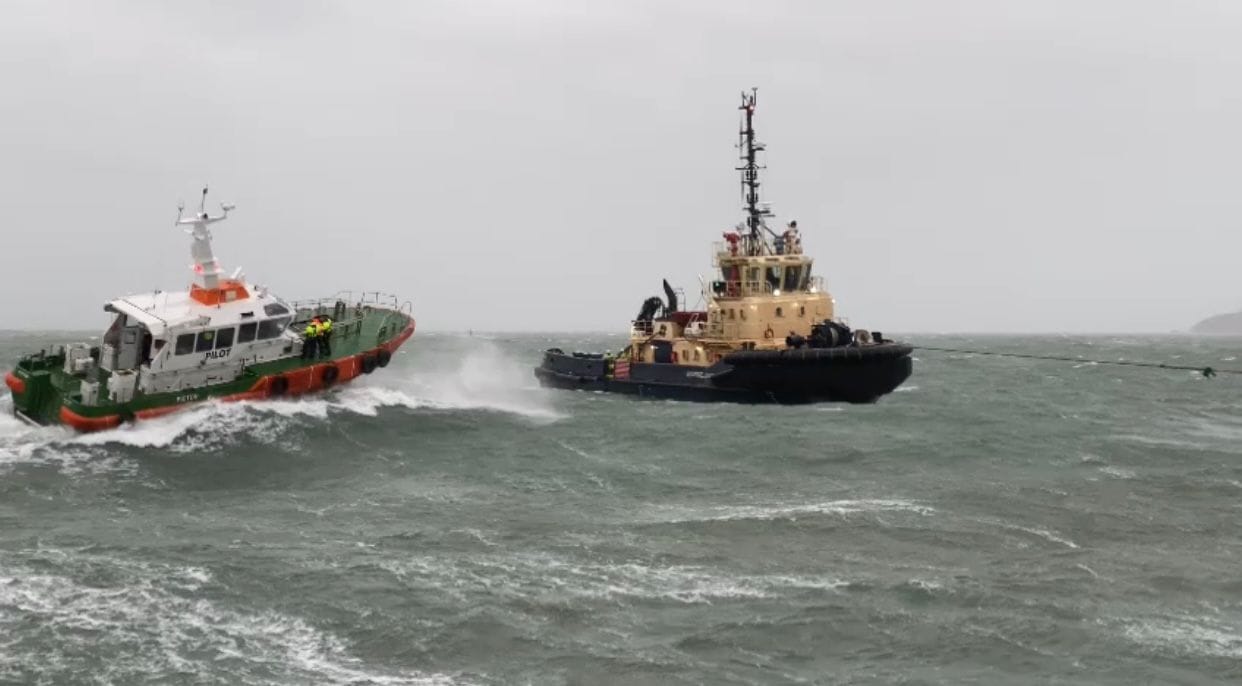 THE PORT of Milford Haven’s new Chief Executive has been in post for only eight months, but already the new boss is promising major changes.
Tom Sawyer took up his post at the end of April.
In an exclusive interview with The Pembrokeshire Herald, the CEO of Wales’ biggest port says that there will be some major changes
Most significantly, there will be a huge investment – “in the millions” – in “on water capability” at the port – meaning new pilot boats and a dramatic increase in pilot numbers.

It’s seemingly a huge turn in fortunes for the port.

As recently as August 2014, the port cut the number of pilot boats on duty to a single crewed vessel – There were talks of pilots striking.
At the time, The Herald was contacted by several crew who have said that they have been offered voluntary redundancy ‘to go’.
The Port had said it was looking to cut costs as the amount of cargo coming into Milford Haven has been decreasing following the closure of Murco refinery.

Currently, issues surrounding energy security in the UK and Europe driven by Russia’s invasion of Ukraine have led to an uplift of 30% in the number of ships berthing in Milford Haven.
Tom Sawyer said on Monday (Dec 5): “We are making a major investment in “on water capability” at the UK’s western energy gateway.
“In a major investment, we will be purchasing at least two new pilot boats and upping pilot numbers.
“It’s a medium-term plan which should be implemented by late 2024,” Mr Sawyer explained.

The promise of new pilot boats will be welcome news for both operators and pilots.
In 2018 a multi-million-pound project to replace the older pilot vessels ran into trouble – after the three boats were deemed ‘unfit for purpose’ by some crew members.

“These boats were rushed out, and were not fit for service”, a source at the Port told this newspaper.

The then brand-new vessels, which were built in Pembrokeshire by Mainstay Marine Solutions at a cost £3.6m, were involved in incidents which led to questions over the operational safety of the craft.
Tom Sawyer says that he is investing in people, safety and resilience and reliability at the port.
He said: “We are putting people into difficult situations. Marine transport involves controlled collisions. We are dealing with hydro-carbon ships kissing pilot boats and jetties.
“We want new pilot boats and an increase in pilot numbers to boost the confidence our teams have. We are investing in resilience and reliability.
“We need to be capable – having well trained pilots, the right boats and equipment.

Asked to confirm how many new vessels the Port of Milford Haven would be commissioning, Mr Sawyer said: “If we were not purchasing two new boats I’d be surprised.
“Better boats are now available, and we want to go out there and get them.
“Some weather conditions mean we can’t get ships in – we can at least make sure we have the best ability to recover.”

In a move which is surely to be welcomed, Mr Sawyer said that crews would have a say in the specifications of the new vessels.

The port boss suggested that some of the older pilot boats may be used as “inside vessels” – as patrol launches for use inside the haven.
There is no doubt that LNG has revived the fortunes of the port.
South Hook LNG will soon receive its 1000th tanker – a milestone the port says it’s proud of.
Another accolade is that the port has never turned away or diverted an LNG ship – every single one has berthed successfully, without exception.

And now, the Government of Qatar is investing millions of pounds in the expansion of the South Hook LNG terminal as the UK becomes more dependent on shipments of the liquefied fuel imported from abroad.
To accommodate around 25% more liquefied natural gas (LNG) imports from around the world, Qatar is upgrading to meet demand – increasing the Terminal’s redelivery capacity to 812.5GWh/d.”

All of this extra activity will benefit the local area. As well as new boats, and the creation of new jobs in the way of pilots and probably support crews, extra revenue will be shared out in the local area for community projects and charities.
Staff at the Port of Milford Haven will also benefit from the Haven’s revival in fortunes. The new CEO has promised that he will share the results of all this new activity.

Citing the dangers of pilots climbing onto tankers in rough weather using ladders – Mr Sawyer promises an increase in sea survival and safety training.
“People should be safe and be able to make good decisions” he said.
Expressing how he intends to motivate the personnel he manages, he said: “If we have a good year, he said we will share this with our people and the wider community”
He said that this would incentivise the workforce at the port to safely deliver efficiencies and improve results.

The new pilots and boats are expected to be operational by late 2024, according to Mr Sawyer.