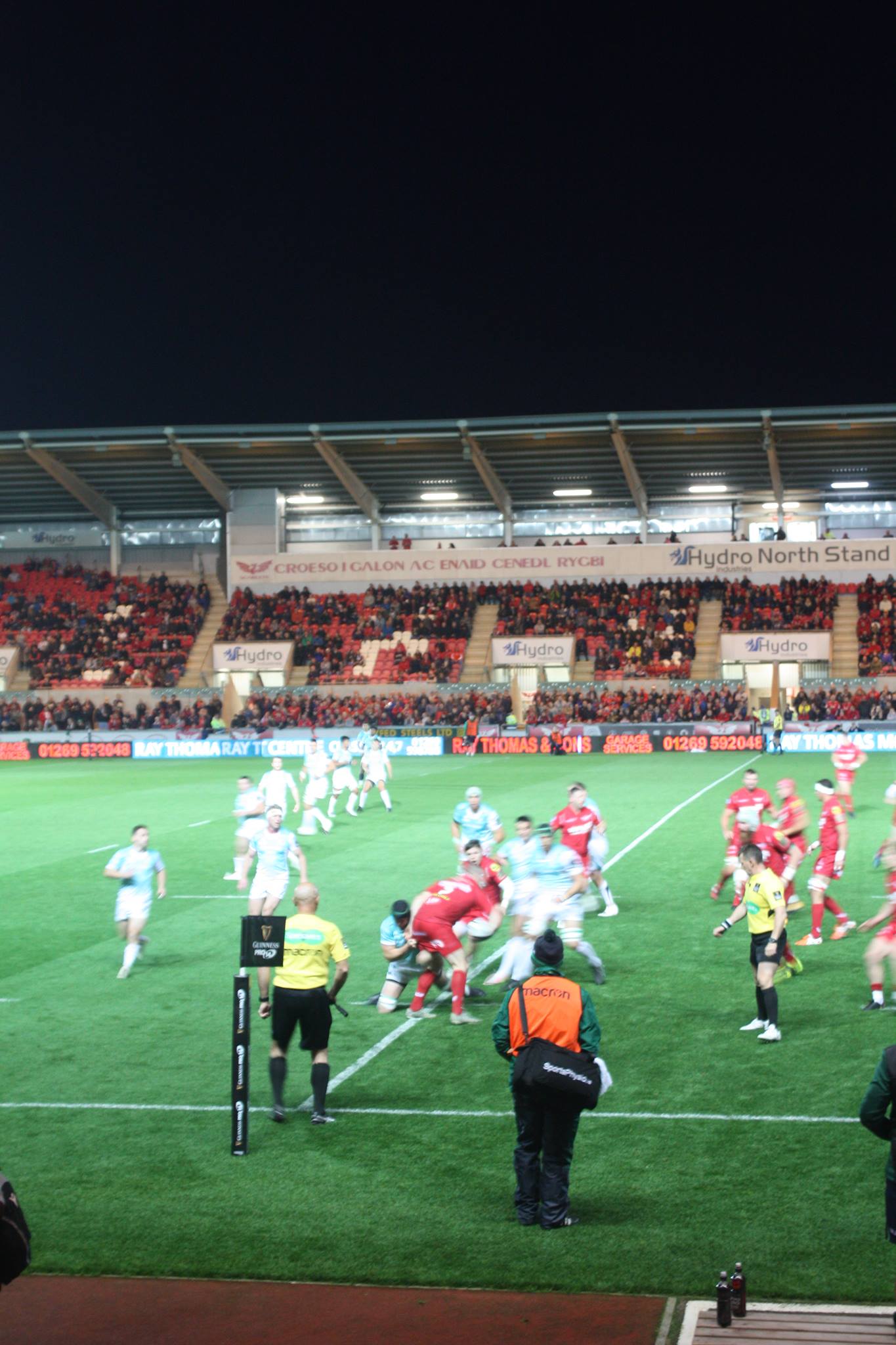 SCARLETS won their Guinness Pro 14 encounter on Friday (Sept 29) at Parc Y Scarlets 34-27 against a spirited Connaught side in a game which saw the teams share nine tries and secure maximum points.

The first half saw seven of those tries, with the Scarlets leading 26-22 thanks to their fourth try of the night, scored by British & Irish Lions full back Leigh Halfpenny.

The Scarlets had opened the scoring after seven minutes following a clean line out ball from second row David Bulbring, where the ball was moved out to an advancing Rhys Patchell, the outside half running a high attacking line, from which he popped the ball into the hands of centre Jonathan Davies, who broke his tackle and created enough space for winger Johnny Mcnicholl to circle around under the posts for Halfpenny to convert.

From the restart, secured by home flanker Wil Boyde the Scarlets moved the ball along their back division until an unfortunate mix up in midfield between centres Scott Williams and Davies saw the ball pop into the hands of outside half Jack Carty who ran in unopposed under the posts and convert his own try.

The mix up typified the game where many errors restricted the momentum in play, with an expectation that both sides would have been frustrated by their inability to take control of the game despite the fact they served up a nine try thriller.

Wales full back Halfpenny also missed two attempts at goal, the first a conversion of man of the match Stefan Evans try on 17 minutes.

The winger was on hand to finish a move which the Scarlets ran nine passes of play before Williams opened the space for Evans to dance around and finish from 40m out.

With Wales coach Warren Gatland and his management team in the stands Evans has now put himself into the slot to be involved in the Autumn International series as the diminutive winger expressed his desire and hunger to run at the opposition defence line, reflecting images of Shane Williams in his heyday.

Carty brought the score back to 12-10 with a penalty conceded from the scrum, with replacement prop Dylan Evans guilty having just come on for Wales international Rob Evans, side lined with a head injury.

Smarting from the setback of losing Evans and three points the Scarlets won possession back as the half hour mark approached thanks to the endeavours of skipper Ken Owens who charged down a clearance from full back Darragh Leader.

Number 8 Will Boyde combined with Josh McCleod and replacement Evans before further good work from Aaron Shingler and Jake Ball put flanker McCleod clear allowing Rhys Patchell to accept an inside pass from Steff Evans to score and Halfpenny to find his kicking boots gain and convert after missing a 40m penalty on 11 minutes.

Referee Nigel Owens took an age to award the try as the TMO viewed numerous angles of the play much to the discontent of the crowd and whilst applauding the innovative way technology can ‘get the decision right’ thought must be given to keeping the game live.

Connaught came back with a try after some sustained phases of play through their pack to release winger Cian Kelleher after good hands from centre Bundee Aki which Carty converted and a mistake from Mcnicholl allowed visiting number 8 John Muldoon to charge 45m through the midfield, linking well with Aki who was tackled and the ball recycled through the efforts of flanker Jarred Butler allowing winger Tim O’Halloran to score an unconverted try.

With the Scarlets behind for the first time in the match with two minutes of the half remaining the they managed to work space once again for Evans to set his wheels in motion and he drew the covering defence for Halfpenny to score and convert for a half time lead of 26-22.

The second half became a much dourer affair as both coaching teams rung the changes and the handling mistakes which epitomised the absorbing first period were there for the 7693 spectators to witness.

Halfpenny extended the lead close to the hour mark with a penalty as Aki was penalised for a double movement in the tackle, with the game drifting aimlessly as both sides were guilty of kicking possession away to allow them to regroup their defensive patterns.

Scarlets coach Wayne Pivac used all his replacements, the last of which was prop Simon Gardiner, who returned to a Scarlets shirt with just under ten minutes remaining.

The former Wales Under 21 star last played for the Region in September 2011 and after a journey which took him around Britain he has this season put in some excellent performances for Llanelli in the Principality Premiership and deservedly earned a recall to the match day squad.

On 74 minutes Connaught brought themselves back into contention of winning the game thanks to a second unconverted try by O’Halloran after he combined well with fellow wing Kelleher before the crescendo for a nervous home crowd saw replacement back row Irishman Tadhg Bierne stride over after second row Jake Ball collected the ball in midfield and make a 30m unopposed run, for Halfpenny to convert and the game end 36-27.

On Saturday (Oct 7), the Scarlets take on rivals Ospreys in the Pro 14 at the Liberty Stadium, before welcoming Cardiff Blues to Park Y Scarlets at the end of the month after they travel to Toulouse and entertain Bath in the European Cup.